In my previous post on electrical matters (which you can see at: http://modelingthesp.blogspot.com/2012/09/electrical-wars-part-2.html ), I mentioned that I like to use ground throws (or hand throws) for turnouts wherever I can. But which kind of throw to use is an interesting issue.
Like many modelers in HO scale, I have long used the Caboose Industries no. 202S ground throw. It is easy to install and is mechanically reliable. Electrically, however, it is less than ideal, as it does not exert much pressure between the points and the stock rails, and electrical contact may be imperiled if the turnout is power-routing. And appearance-wise, it is really a cover-your-eyes item, as it is too large even for O scale. When I take layout photos, I have often temporarily placed small pieces of HO shrubbery to conceal these monster ground throws.
Here is just one model photo with an unconcealed Caboose Industries 202S to illustrate what I’m talking about.

Hard to imagine the HO scale man operating that massive ground throw, which is nearly waist-high.
Caboose Industries do make a tall switch stand, which is much closer to scale, and I have had one in service for quite a few years with no mechanical problems. But electrically it seems to be of a piece with the ground throw.
I should mention that Caboose Industries has also produced a ground throw with electrical contacts incorporated, model 119R, which sounds like a good idea. But it is tricky to assemble, and is not, repeat not, durable in use. After trying a couple of these and experiencing early failures, I abandoned the idea and ripped out the ones I had installed.
One solution to the electrical weakness of the Caboose Industries devices is to add auxiliary contacts somewhere. The traditional vertical wire from the throw bar can be used to operate contacts underneath the layout, and if horizontal space is available, a similar process can be created at ground level. Here is the west switch of Shumala, using a ground throw which throws both the switch points and also a set of contacts to power the frog. The contacts are salvaged from a twin-coil switch machine. 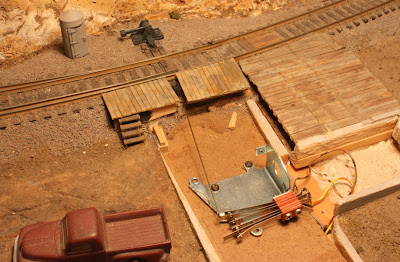 In operation, this is concealed inside a section building, as seen in this view. 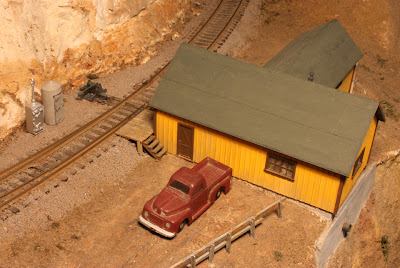 But these fixes, effective as they are electrically, do not make any improvements in the appearance of the ground throw. And they do require some fiddly placement of the contacts, and occasional adjustment of same, to get effective operation.
What else can one do? Another hand-thrown switch stand I tried years ago is the Star stand made by ST&LO of Flagstaff, Arizona. This has electrical contacts under its base, so is meant to do, and does do, that part of the job without having to use any auxiliary parts. I was worried about its durability, but it is cast brass and is in fact quite sturdy, and not excessively oversize. My only criticism would be that it only rotates about 45 degrees when thrown, so that the target cannot prototypically indicate position of the points, but that’s a minor problem.
The underneath part with the electrical contacts required a hole 0.5 inches deep and 0.75 inches in diameter. The remainder of the instructions is shown on this part of the packaging. 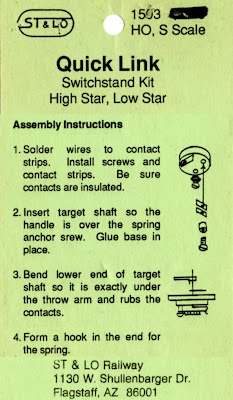 Here is a photo of one of these stands, installed at Ballard on my layout. It is operated by moving the lever, just like the prototype. I wish I could get more of these. I have heard rumors that you can still find them, but I have not been able to do so. This item was reviewed in the Narrow Gauge & Short Line Gazette way back in July/August of 1987 (25 years ago!), so my hopes are not high. 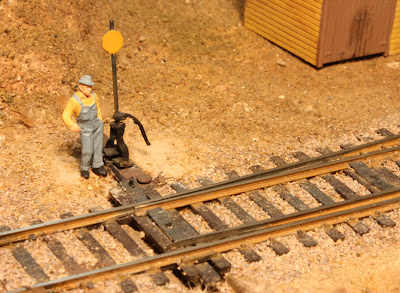 This switch stand is somewhat oversize too, but at least does not dwarf an HO scale figure. The shaft is too tall and I should shorten it to be more realistic.
One solution to these problems is to use slide switches, either remotely operated by a mechanical rod, or on the layout surface to be hand-thrown, thus taking care of both the motion of switch points and electrical contact at the same time. This definitely works. I have done this under the layout, but never on top of the layout. I continue to need a way to hand-throw accessible switches.
A new solution has appeared on the market recently for the ground throw problem. It is produced by Bitter Creek Models. A good summary of its background was published in a review by John R. Signor (in The Warbonnet, magazine of the Santa Fe Railway Historical & Modeling Society, Volume 18, No. 3, Third Quarter 2012, page 46). I reproduce it here with John’s permission. You can click on this to enlarge it if you wish.

I purchased some of these ground throws to try, and can confirm what John says: the positive latching, and the spring-loaded overthrow, do provide dependable electrical contact, while being far smaller than the Caboose Industries product. Here is a view of one in place, not yet painted a more “dirt-like” color: 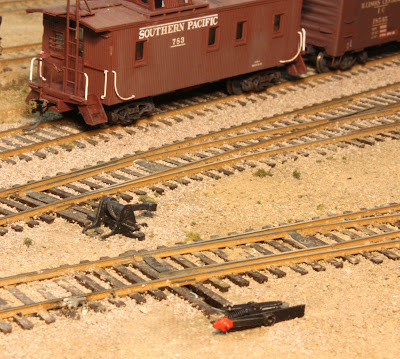 Note the adjoining Caboose Industries throw, which stands far taller. I will probably repaint the red lever end to a more innocuous color. John has done the same, as you can see in his own installation, pictured at the right in the review above.
I am happy with this Bitter Creek device and am steadily replacing my Caboose Industries ground throws. If you’d like to try them, you can purchase the B-4001 Manual Ground Throw via this link: www.bittercreekmodels.com . They are $9.95 per pair, plus shipping. I think they are a better solution.
Tony Thompson
Posted by Tony Thompson at 10:48 AM