A new depot for Shumala

Shumala is the junction on my layout between Southern Pacific’s Coast Line and the SP’s (imaginary) Santa Rosalia branch. I discussed this fictional branch line idea as the core concept in my current layout, in an earlier post about layout locale, at: http://modelingthesp.blogspot.com/2011/01/layout-design-locale.html . On my old layout in Pittsburgh, PA, this town was called Jalama (which is a real place on the SP Coast Line). I presented an overview of the old layout, and a track plan of this part of the layout, in a prior post: http://modelingthesp.blogspot.com/2012/03/survival-from-my-old-layout.html .
On the old layout, Jalama was a junction with the Coast Line main, but the junction was with the imaginary short line, Lompoc & Cuyama. Accordingly, as the short line was supposed to have arrived later, the L&C had to build and man the tower at the interchange, in accord with normal railroad arrangements. I didn’t have much space for a tower, so I chose to build a classic kit from Campbell Scale Models, called Kiowa Junction, which incorporated a small depot as part of the tower structure. I painted it in L&C depot colors, since supposedly it was an L&C structure.
Here is a photo of that depot, at left, with the L&C’s only diesel locomotive on the track behind it, just departing inland. (And note one of the L&C standard cabooses, based on Yosemite Valley no. 15, as described previously: http://modelingthesp.blogspot.com/2012/08/whimsy.html .) 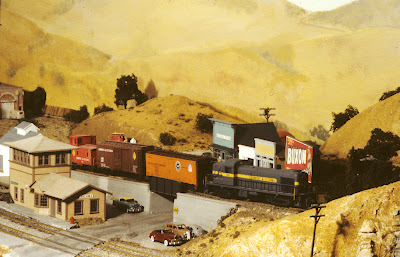 And here’s a view from the other end. That’s the tunnel to Ballard in the background. 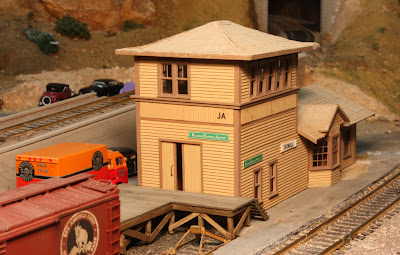 This depot-tower was fine in that layout concept, but with the change to the junction being a pretty small branch line of the SP, there was far too little traffic to justify having a tower. Moreover, because the Campbell Kiowa Junction kit was based on a Santa Fe structure at Ottawa Junction, Kansas (see Paul Larson’s construction article in Model Railroader, August 1952), it is not a very good choice for an SP-built depot. Though I’ve always liked the Ottawa Junction structure and the model I built of it, it had to be replaced with an SP depot.
One of the attractions of creating a believable branch line of any railroad is the depots, because they are among the things that tell you at a glance which railroad it is. So you need to have standard or at least recognizable depots. Southern Pacific modelers in HO scale are blessed, in that kits exist for the two depot designs that were built in very large numbers, designated as CS 22 and CS 23 (American Model Builders, kits 134 and 150, respectively). But for my branch line junction at Shumala, the AMB kits aren’t usable because the space available is too small, less than half the size of a CS 22 depot.

By the way, if you would like to learn more about SP standard depots, the best source at present is Henry E. Bender’s pair of articles, entitled “Southern Pacific Lines Standard Design Depots,” Parts 1 and 2, in the SP Historical & Technical Society magazine, Trainline, issues 57 (Fall 1998, pages 11–26) and 58 (Winter 1998, pages 27–33). I say “at present” because although Henry’s book-length expansion of this material is en route to publication by Signature Press, it’s too early to estimate a release date.
For extensive views of depots throughout the Pacific Lines of the SP, there was published a three-book series by the SP Historical & Technical Society, compiled by John R. Signor and entitled Pacific Lines Stations, Volumes 1 through 3, in 1997, 1998 and 1999, respectively. Though unfortunately out of print, they can often be obtained from used book dealers. I used the many photos of depots in these books to determine the most common features that I should incorporate into my Shumala depot.

Needing, as I said, a smaller depot for Shumala, I searched for one of SP’s smaller depots, standard or close to standard, that I could build. I settled on the depot originally designed for Sylmar, California, which is a couple of miles west of San Fernando in Southern California. Plans for this depot can be found in the book, Southern Pacific Lines Common Standard Plans, Volume 5, Steam Age Equipment Company, Dunsmuir, CA 1997, pages 18 and 19.
I include two parts of the drawing below as a relatively low resolution jpeg, but both large sheets are also available as a PDF on Google Docs (at this link: https://docs.google.com/file/d/0Bz_ctrHrDz4wNFFiTDhkOWxLQVE/edit ). You can click on it to enlarge the image. At original size, as on the PDF, the drawing is to HO scale, facilitating the sizing of details. 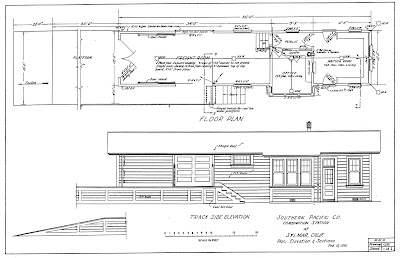 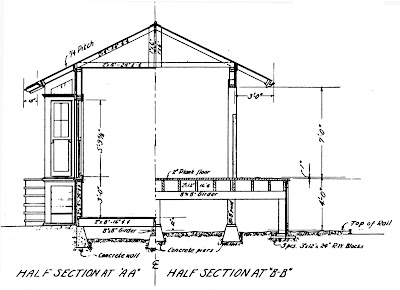 Although quite narrow at 12 by 56 feet, the Sylmar plan could be widened to fit my space, which was 17 by 49 feet. Many SP standard depots were 20 feet wide, so the wider look is appropriate. I would also have to shorten the freight room by seven scale feet, but one of the primary variations among different versions of SP’s standard depot designs was the size of the freight rooms.
Here is how I would summarize the characteristics of this depot, from examination of the plans. The building had a small waiting room, about 12 feet long at one end, adjoining an office about 9 feet long, which also had a rectangular operator’s bay. This type of bay is quite typical of SP depots. The balance of the structure is the freight room, which I would shorten. I would also have to modify the full freight platform as shown on the drawing, since I don’t have enough space, but I could rearrange it somewhat, to match other SP depot designs.
At this point, knowing the features of SP standard design and the changes I would have to make to fit my space, I could proceed to choosing model materials and a construction process. Those steps have been written up for my forthcoming column, which will appear in the November 2012 issue of Model Railroad Hobbyist, on line. It’s always a free download from the MRH site at http://model-railroad-hobbyist.com/ , and should be available on or soon after November 1.
Tony Thompson
Posted by Tony Thompson at 10:12 AM