In an earlier post, I used the Southern Pacific Class A-50-4 automobile cars as an example to illustrate the information which exists in the SP Car Ledgers. I applied that information to determining how many cars of this class survived into 1953 (which was a question I’d been asked) and whether they had AB brakes applied. I also showed prototype photos. You can view that post at: http://modelingthesp.blogspot.com/2012/05/sp-car-ledgers-and-class-50-4-auto-cars.html .
Since that post, further questions have arisen about the A-50-4 cars, in particular whether they kept their original Vulcan trucks or received new U-section cast steel AAR trucks, a change made on many older SP freight cars. Again, the Car Ledger contains this information, showing the date and place of such a replacement, if it occurred. For the cars listed in the previous post as late survivors, here are the truck data.

63246, replaced 2-53
63261 trucks not replaced
63297, trucks not replaced
63325, trucks not replaced
Second, the 150-car batch built for T&NO in 1921 and acquired by Pacific Lines in 1936, SP 63600–63746:
63666, trucks not replaced
63699, trucks not replaced
63707, replaced 11-53 (scrapped summer 1954)
63727, trucks not replaced
This list probably isn’t exhaustive but it should provide truck information for nearly all or all of the survivors past 1-53. For modelers, obviously, the date one models will determine what kind of trucks should be under the model.
This SP car class is of particular interest to me, because an HO scale kit for it exists. The kit was developed by Speedwitch Media for the SP Historical & Technical Society convention in 2005, and like all Speedwitch kits, it is a beautiful model. It represents the cars late in their lives, with the enlarged side door opening which was shown in a photograph in the prior A-50-4 post (cited above). I had this kit on the shelf, until I had an offer from Pierre Oliver of Elgin Car Shops (visit http://www.elgincarshops.com/ ), who was about to build another A-50-4 for a client, to build my kit as well.
I took him up on it, knowing that he is a fine craftsman, although since I much enjoy applying decal lettering and then weathering my freight cars, I asked him to build and paint it but not to do any lettering. The car did have AB brakes and Vulcan trucks in 1953, which is how Pierre built it.
Presently the completed car arrived, beautiful as expected, and I applied the lettering and weathering. Here is a view of the completed car. It would no longer have been in automobile service by 1953, but retains that lettering because at that time the AAR still defined double-door cars as automobile cars. 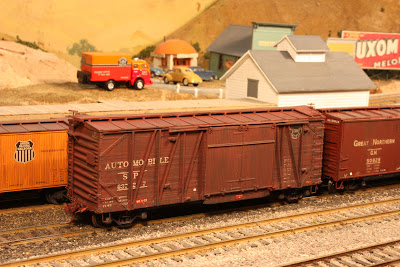 I really like this car as part of my SP freight car fleet, with its funky steep diagonal brace at the right side of the door, created when the door opening was enlarged (see the prototype photo in the previous post, cited in the first paragraph of this post). It is now at work on my layout, hauling lumber (a common SP use for double-door cars no longer suitable for automobiles).
Tony Thompson
Posted by Tony Thompson at 7:23 AM