Every layout is distinctive if not unique, so I am a little reluctant to talk about electrical issues on my layout. Obviously every layout has its own features and problems. But what I will try to do is indicate why I’m making changes (hopefully enhancements), which I suspect will be especially relevant for those with older layouts, originally wired for DC.
Those who haven’t made a move toward DCC may be thinking, “This is where I log out,” but some of these enhancements have nothing directly to do with DCC, and will improve the layout if operated in DC.
I should hasten to add that my present layout is mostly composed of sections from the layout I had in Pittsburgh, and that previous layout operated dependably, both with respect to trackwork and electrical arrangements. But some of the decisions I made in designing that layout no longer look like such bright ideas. They seemed all right at the time, but I now see their shortcomings.
One decision I had made was cut a minimum number of gaps, and route power to much trackage via turnouts. In some cases, this meant that track segments rather far from their power-routing points would be dead unless that routing turnout were thrown properly, even if a locomotive did not need to run through that turnout or was even quite a distance from that turnout. This can get old, especially as one becomes accustomed to the freedom to move locomotives almost everywhere with DCC.
The solution to that one is easily stated: just drop more feeders and cut more gaps. In other words, cut new gaps right at the formerly power-routing turnout, and feed the track on the other side of each gap so created. Then the turnout still routes power, but only to the frog, not to long stretches of track. 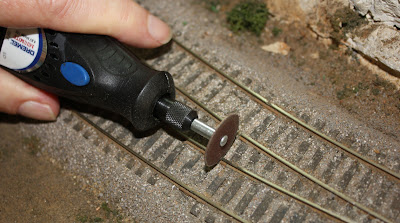 I use a battery-powered Dremel for cutting gaps, a very convenient and quick tool for this job (wearing eye protection, of course). I like to cut the gaps first, because then you really have to keep going with the project. Otherwise you have track out of service!
I use a smallish drill, 1/8-inch or smaller, to make holes for the new feeders. This photo shows work at Ballard. Here again, a battery-powered tool makes it easy. 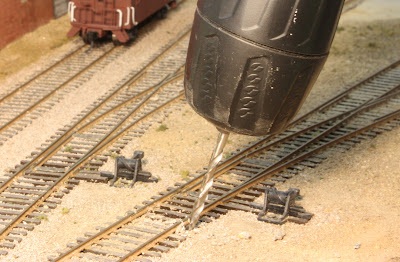 After awhile I found I’d made ten holes here at Ballard—irresistibly reminding me of a line in the Beatles song (“A Day in the Life,” by John Lennon): “Four thousand holes in Blackburn, Lancashire, and though the holes were rather small . . .” Here are seven of mine. I can’t speak for the holes in Lancashire.

Completing this project was simple work, and because I have terminal strips very generously strewn around under the layout, it was easy to connect into the track power. Here I’m soldering feeders in existing track at Shumala. 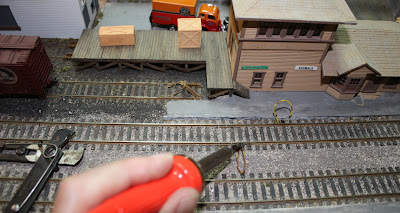 More complex are some short circuits I have discovered recently, in trackage that never used to exhibit shorts. Microscopic examination of both track and existing wiring does not reveal any faults. (I am giving the very short version of this story, as I have put in a lot of time and effort not finding these faults.) So I am simply reconnecting much under-layout wiring to new terminal strips and panel controls. This is logically more complex than the re-gapping and re-feeding mentioned above, and is more work in sometimes cramped spaces under the layout. But as I have reworked layout sections, the result has been successful, so I’m continuing.
When doing electrical work like this, I always start by checking carefully with my Layout Notebook (briefly described in a previous post, at: http://modelingthesp.blogspot.com/2012/08/a-modeling-journal.html ) to make sure I understand all existing wiring and terminal strips. This also ensures that I’m ready to add notations to existing notebook pages to document the new wiring, or gaps, or both. The notebook page just cited illustrates the kind of information I archive.
A second point worth mentioning is that I use a multi-meter all the time to check track voltages and connectivity. I have known modelers who built and still maintain their layouts without recourse to a meter, and I have no idea how that’s possible. I know I couldn’t do it.
For background information, I often refer back to the basic books to make sure I correctly remember what to do. I have used the Kalmbach books for years and still find them useful and direct. On electrical matters, I like Andy Sperandeo’s Easy Model Railroading Wiring (Second Edition, 1999) and Lionel Strang’s DCC Made Easy (2003). There is quite a bit about DCC wiring issues in Andy’s book, but it’s nice to make sure I understand any situation as it’s described in both books. Both of these particular books currently appear to be out of print but I’m sure the equivalent Kalmbach books now in print would supply comparable information.
As I stated at the outset, the real purpose of this post is to remark on wiring improvements, which can be needed on any layout. Exactly how and where you do them is a personal matter, so I didn’t give any detail about that.
Tony Thompson
Posted by Tony Thompson at 10:04 AM