Over the years I’ve collected a variety of Southern Pacific train orders, and naturally would like to use them in layout operations. When my layout was in Pittsburgh, PA, I had acquired a rather old SP train order, and used it as a basis to have pads of blank orders printed up. The one I had was yellow, so I ordered mine printed in yellow. I really wanted the tissue material (thus the nickname, “flimsy,” for these orders), but the printer I spoke to in Pittsburgh became rather pale at the thought of printing on tissue. I compromised with regular paper.
Here is what they looked like. 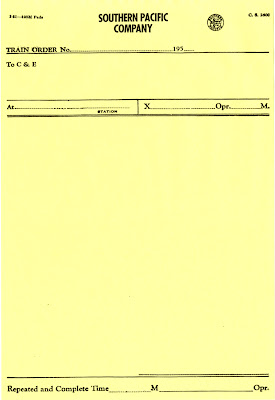 As is perhaps evident, the body of this blank is photocopied from an actual SP train order.
Now what about the header at the top? The company name and safety emblem were by no means standard in the era I model, the early 1950s, and in subsequent years, as I’ve acquired more SP order forms, I realize that they shouldn’t have those items at the top in my era, nor have I seen a yellow copy from the 1950s.
Nevertheless, I have (so far) stuck with a black & white version of this order blank. Here is an example of one of the period SP train orders I have, issued at Los Angeles in 1948: 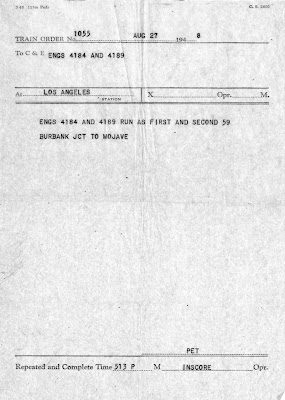 Note that these two road engines are both cab-forwards.
As another example of a real one to refer to, this is an interesting order for two extra trains on the Ione Branch (you may click on it to enlarge, if you wish), dated in 1951: 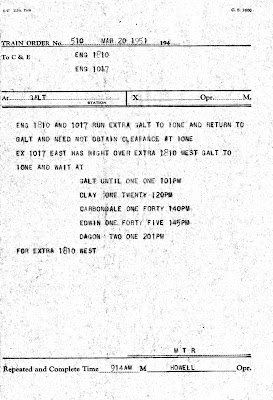 This is especially interesting because my layout, which models an SP branch, can appropriately operate with similar orders. For example, this order could be issued, to run to the outer end of the branch and return: 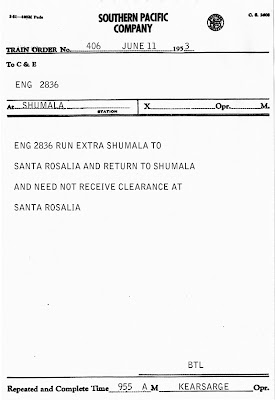 This post is not the place to explore the topic of how train orders work and how they are used on a layout, but there are superb books which cover that in detail. Both the Kalmbach books on operation are equally good, though one is out of print (readily available used from on-line dealers). Currently available is Tony Koester’s Realistic Model Railroad Operation (2003). The other one is Bruce Chubb’s How to Operate Your Model Railroad (1977), an excellent and comprehensive book, and well worth seeking out.
I am still deciding whether to remove the SP railroad name and emblem from the top of my model train orders. It was more important on my Pittsburgh layout, where there was a short line operating in addition to the SP, and obviously orders needed to be clearly from one railroad or the other. That issue no longer applies, so I am leaning toward removing the name, and making my orders look just like the real SP ones.
Tony Thompson
Posted by Tony Thompson at 9:11 AM

Email ThisBlogThis!Share to TwitterShare to FacebookShare to Pinterest
Labels: My layout, Operations, Typography