My recent post about the preparation and use of background flats (see: http://modelingthesp.blogspot.com/2012/08/background-flats.html ) showed a photo of a Walthers HO scale model on an SP caboose, Class C-30-1, which I stated I had renumbered to a low but correct number. Since I have received two e-mails asking for clarification, I will oblige with a brief discussion.
The common perception is that this very numerous class of SP wood cabooses, Class C-30-1, was numbered in the 600s, 700s, and 800s. This is true, but is only part of the story, as I explain below. But first, let me say that I have covered all this in some detail in Volume 2 of my series, Southern Pacific Freight Cars, subtitled “Cabooses” (Signature Press, 2002), in an entire, long chapter about this class. But I realize there are plenty of folks out there who don’t have this book, thus this post.
When SP began production of the C-30-1 cars at Los Angeles General Shop in 1917, there were already system cabooses numbered into the high 500s and even a few in the low 600s. So the first cars of C-30-1 were numbered 586–625 and 641-670 in 1917. In the following six years, through 1924, car numbers continued from 671 up to 899. Since the 900 number series was reserved for various miscellaneous, inherited and converted cars in caboose service, the SP began to re-use lower car numbers that had been vacated through scrapping. During 1925 through 1927, 180 more Pacific Lines cars were built in Class C-30-1, all with numbers lower than 640.
The table below contains the car numbers I was able to determine from the surviving caboose car cards at the California State Railroad Museum. In addition to the numbers shown in this table, SP also finally used car numbers 626–640 in 1926. Thus there were a lot of C-30-1 cabooses with numbers lower than 586. The total number of cabooses of this class appears to be 620 cars, 158 of them for NWP, SD&A and T&NO, the balance for Pacific Lines. 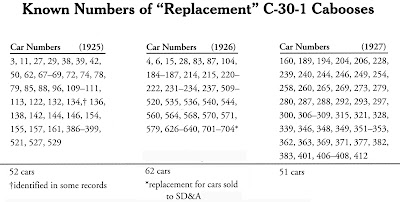 So with about 165 cars out of about 460 for Pacific Lines being numbered below 586, I felt I had to model a few of these cars among my group of C-30-1 cabooses. The one shown in the photo, in the blog post cited in the first sentence at the top of this post, is SP 239. You will see this car number in the 1927 group, in the table above.
Incidentally, the history of all the cars that carried the numbers in this table before those numbers were used for C-30-1 cars is also included in my Caboose book, but I won’t address that aspect in this post.
A further point which may not be immediately evident in that caboose photo is that I revised the white safety handrails as provided by Walthers. The way they painted the handrails is not impossible, but is fairly unusual. I simply revised it with some boxcar red paint, to the most common pattern for these handrails, as can be seen in this photo. Note: the car is not yet weathered. 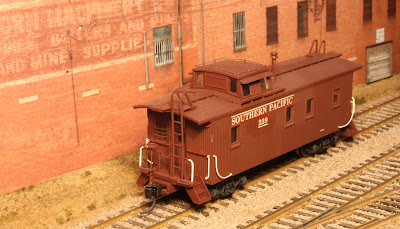 The background is one of those KingMill flats I discussed in my original post which had the caboose photo.
So that’s what I was talking about, renumbering a Walthers caboose to a lower but correct number. If you operate very many C-30-1 cars yourself, you may wish to do the same.
Tony Thompson
Posted by Tony Thompson at 10:12 AM