In a number of prior posts, I have discussed my choices in building up a model car fleet. There are a bunch of posts, so I won’t cite all of them, but here is an example: http://modelingthesp.blogspot.com/2011/05/choosing-model-car-fleet-11-reefers.html . This example was chosen because it touches on one aspect which is important to me, namely trying to proportion the car fleet in a realistic and prototypical way. This post is to describe what’s been happening with my model fleet in recent months.
Realistic car fleet proportioning, I believe, should follow the Gilbert-Nelson approach where it applies. This idea, named for Tim Gilbert and Dave Nelson, who developed it, is that free-running cars like box cars and many gondolas and flat cars, moved all over the country as needed, resulting in the proportion of such cars in any locality being the proportion of their owner’s car fleet in the national fleet. This seems counter-intuitive to many, since it’s natural to imagine cars mostly moving regionally, but Gilbert and Nelson produced extensive data supporting the idea. I discussed this idea and its ramifications more extensively in a prior post; you can check this link: http://modelingthesp.blogspot.com/2010/12/choosing-model-car-fleet-2.html .
One important and ongoing change in my fleet is the replacement of older models, which are usually less well detailed, not quite as accurate as I’d like, or both. Another is the addition of new models to fill gaps or complete needs. Although I try to keep it under control, I do have a collection-building instinct. This may lead, for example, to the desire to roster both a prewar and postwar box car for Illinois Central or Seaboard, regardless of whether cars of those railroads are necessarily needed in the fleet. That’s okay as one more aspect of hobby fun, but may not fit my other criteria (gaps, or Gilbert-Nelson needs), so I try to maintain a “fleet-wide” perspective on all such decisions.
As older models, some of them stand-ins, are superseded by better cars, the replaced ones may get sold or given away. Some are not bad looking at all, and sell readily at swap meets or auctions. A few of the older cars are retained, and have been or will be upgraded to current freight car standards. There are even a few which simply get scrapped.
Below is one example of a stand-in, FGEX 57390, representing a Fruit Growers rebuild, now replaced with a redetailed Accurail reefer. This car served on my old layout for a number of years as a “mainline” car. 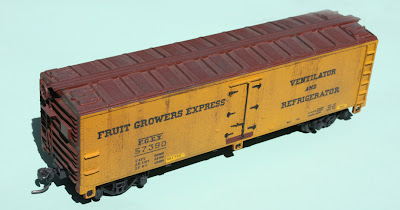 The model is an old Mantua reefer body, with a replaced underframe and brake wheel, but little else done to it. The cast-on running board, grabs and ladders remain, as do the filled-in or solid sill steps. But note that I painted the interior of the steps black, so that they look like actual sill steps.
I suppose most modelers are continually involved in improving their car fleet, including discarding models which are superseded for some reason. But I’m emphasizing here that it’s useful to maintain that “fleet-wide” perspective when doing so. I might also mention that I often find upgrading to be a more interesting and challenging process than replacement. As I proceed with upgrades, I will report, in future posts, any which seem to me to be projects of interest to others.
Tony Thompson
Posted by Tony Thompson at 9:40 AM