After I posted my description of 1950-era SP forms used for internal communication, I learned from John Signor that he uses a somewhat different and later form on his 1960s-era SP layout. This post is about the form John sent me.
My first post (which you might like to see for background; view it at: http://modelingthesp.blogspot.com/2012/08/internal-sp-communications.html ) described Telegram, Mailgram and Airgram forms with circa 1950 adoption dates (shown in most SP forms in the upper left corner). John’s Mailgram form is dated 12-59 and has a much paler and wider blue stripe than the Mailgram form of 1950 which I showed. John has made up a bunch of these forms to use for agent and other communications to train crews on his layout.
So for anyone modeling a layout with an era like John’s, 1960 or later, this Mailgram form would be appropriate. The original was the half-page size I mentioned in my previous post. 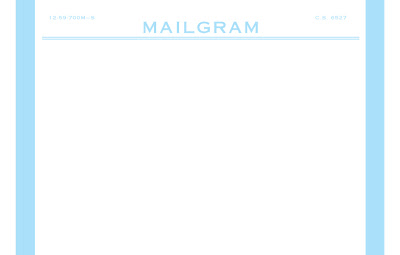 As I mentioned previously, pads of forms like this were in many employee’s desks, and were used for all kinds of handwritten and typed communication among employees, whether in the same building or far away across the system. They are ideal for model layout operations for communications with train crews.
Tony Thompson
Posted by Tony Thompson at 8:56 PM