I’ve experimented over the years with background flat structures, and quickly realized that you need to choose structures with appropriate roof lines, or else control the angle from which a viewer can see the flat. I do have some truncated buildings on my layout already, and one more under construction, but at the moment don’t have a true flat.
My entire thinking on this topic was turned entirely around during one of the layout tours at the NMRA Convention in Milwaukee in 2010. One layout had a long yard, bordered by a stunning set of flats of brick warehouses and factories. Several of us on the tour all said, “What the heck are those?” The owner told us they were products of KingMill Enterprises (you can visit their site at: http://www.kingmill.com/shop/index.php ). Well, when I got home I browsed through their extensive selection and chose a few to try out. The selection includes non-railroad-served buildings as well as obvious candidates as factories and warehouses to place along sidings.
The KingMill flats are photos of actual buildings, and thus include weathering, electrical wires, fire escapes, plumbing, and other details that look terrific, and as background, of course, it’s not obvious that they are not three-dimensional. The core of the line is HO scale, but they also have N scale products. They are printed on heavy card stock.
These fine flats speak for themselves, but I thought I would show preparation of one of them, to use as a photo backdrop. I have a small “photo bench,” behind which I usually simply place a sky-blue card, sometimes trees and bushes, but it would be nice to have alternatives. My first KingMill flats, then, were intended as these background buildings, not an industry.
Preparing the flats is pretty easy, if you follow their directions. The first step is to cut out the artwork with a sharp blade. I used a new single-edge razor blade. I have a couple of long stainless steel rulers which are ideal for this job. The particular sheet shown in this photo is from KingMill’s current “Radical Flats” series. 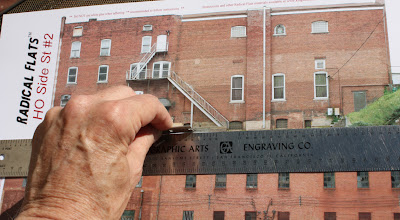 As you can see, this is KingMill’s sheet “Side Street #2,” which has two buildings on it.
Next a support of some kind is recommended, such as foam core board. The building flat could be attached directly to your layout backdrop, but if you apply a support backing, it allows other placements. (Some KingMill items are meant to have short, vestigial sides so that they have a little three-dimensionality, and these of course require support.) Here is a crucial point: water-base adhesives must not be used with KingMill flats. They recommend rubber cement or spray adhesive, and are specific in warning that white glue or comparable products will damage the flats.
Having worked with rubber cement a lot in my professional life in days gone by, I felt comfortable with that option, and purchased a fresh can from my local art store. While there, I bought some foam core board too. Then I cut the foam core pieces a little smaller than the KingMill buildings.
Using a light coat of rubber cement on the foam core, I then let it “dry.” As soon as it looks less shiny, it has a tacky surface on which you can position your cut-out, and then lift it and re-set it to re-adjust if necessary. This tacky but removable surface is the key to effective use of rubber cement. 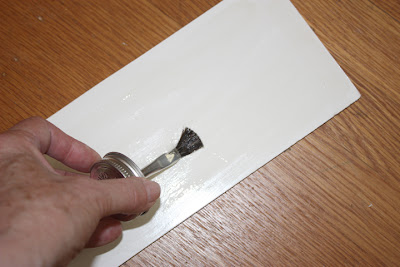 This next photo shows the back of the completed assembly of foam core behind the KingMill cut-out. Since it will be used as a photo backdrop, I did not bring the foam core to the edge of the cut-out.

Just to show results, here are these two backdrops in use for a photo shoot. First, the building with the fire escape, with an unweathered Walthers SP caboose on the track (it’s been renumbered to a correct, lower number). 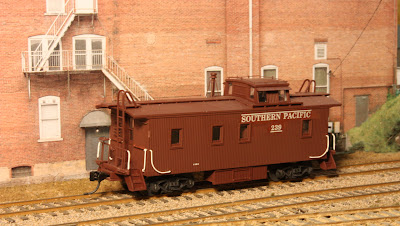 Second, a mill gondola, which is a kitbash by Richard Hendrickson. He described it in his by-now-classic articles on modeling various mill gondolas by kitbashing Athearn gondolas. This was a two-part series in Prototype Modeler, in the September-October and November-December issues of 1982, pages 31 and 12, respectively. As seen here, it has a large tank load which Richard built, and he was kind enough to give me this model. You may wish to click on either photo to enlarge the image. 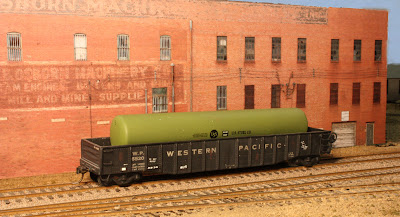 Incidentally, there’s a photo of an EJ&E gondola I kitbashed myself from Richard’s articles, some years ago, in a previous post. Here’s a link: http://modelingthesp.blogspot.com/2011/12/route-cards-5.html .
These quickie photos can only suggest how good these flats look, and I intend to use a few on my layout, especially for the large brick cannery at Santa Rosalia on my layout. Now that I have made these, I’m still as impressed as I was on my first impression!
Tony Thompson
Posted by Tony Thompson at 10:15 AM