I have mentioned the ways employees and managers communicated in previous posts, particularly through my interest in the bill box and the messages that were transmitted via that box, usually from a local agent to a train crew, sometimes in the opposite direction. I gave some Illinois Central examples in this post: http://modelingthesp.blogspot.com/2012/03/bill-box.html .
In the present post, I give examples of the three kinds of forms SP used internally for a number of years. These were called Telegram, Mailgram and Airgram, named for the way in which they were expected to be transmitted (“air” refers to air mail). But in fact pads of these forms were in many desks, and it’s clear from many surviving examples that messages were typed on whatever was handy. Especially as telegrams became uncommon as communication, all those pads of blank telegram forms became, in effect, memo pads.
I have seen all three of these SP forms as plain paper forms, and as tissue versions for carbon copies. There seems to have been a color code, with Mailgram forms having blue stripes along each vertical edge, and Airgrams having green stripes in the same place. Sometimes the colors were dark, sometimes rather light, but all the Mailgrams and Airgrams I’ve seen were on white stock. I have not seen a Telegram form with color stripes, but I have seen the tissue Telegram forms in white, yellow and pink.
Let’s look at some examples. All are from a file about temporarily renumbering some “rough loading” cars from revenue numbers to SPMW numbers for company lumber loading (SP file number 413-014). Here is a pink telegram form, clearly an original from its typing, but on tissue. There was some cellophane tape along the left edge, which has discolored to a yellowish color. 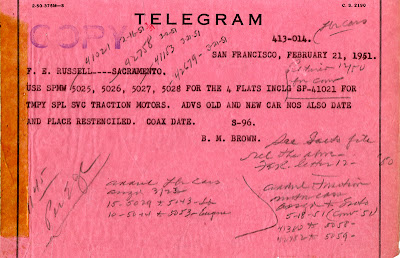 Note in the upper left corner is a code which contains the adoption date of this particular stationery item: 2-50.
Here is a Mailgram, a carbon copy on tissue. Below it is an Airgram, also on tissue stock and a carbon copy. Their adoption dates are, respectively, 5-50 and 1-49. You may click to enlarge these if interested in the content. 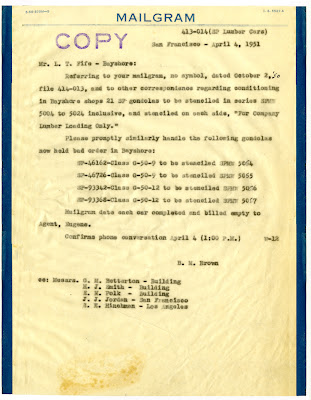 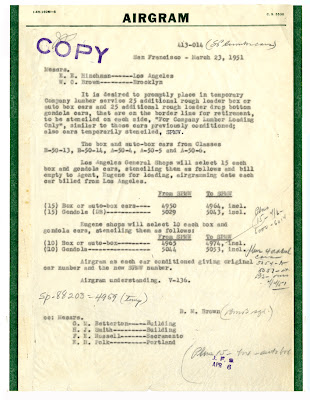 The Telegram form is 8 x 5.125 inches, and I have seen both Mailgram and Airgram stock of the same size. The “full-page” forms are 8 x 10.25 inches, so that the smaller stock is half a full page.
Aside from the intrinsic interest in seeing these company communications, might there be something for the modeler to use? Indeed there is. I have made up a set of Telegram blank forms, drawn from the form shown above, for use in bill-box messages from agent to crew (again, see my discussion at; http://modelingthesp.blogspot.com/2012/03/bill-box.html ). Here is how my form looks ( I chose not to use a colored stock): 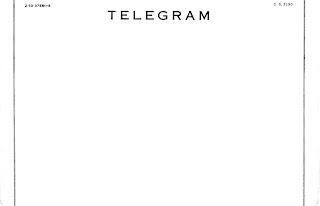 This shows a way to approach railroad-company messaging other than plain paper, or the familiar train order. Even if a layout does not use bill boxes, some kind of message to crews may have to be provided, and this kind of form is one way to do so.
Tony Thompson
Posted by Tony Thompson at 6:57 PM