I have for some time had a stash of Overland brass tank cars, which I acquired at the time they were imported, without a clear program of needs for individual cars. In the time since, I have been gradually choosing paint schemes which fit the particular car bodies, and also fit into my layout needs. This post is about finishing one of those cars. The project isn’t presented because of its intrinsic importance, but to illustrate an approach to choosing a paint scheme.
One of these cars was an insulated ICC 104 car, with insulated dome and appropriate dome-top appliances suitable for chemical service. It is Overland Models product no. 3133. I began by spray painting the upper body and ends a light gray (I used Floquil “SP Lettering Gray”). Once that was well dried, I masked the ends and the body above the jacket closure and airbrushed the frame and the bottom of the jacket Grimy Black. The paint turned out fairly flat, so I applied a coat of Testor’s Glosscote to prepare it for decaling.
The lettering scheme I wanted to do was a 1950s version of the General Chemical tank cars (reporting mark GCX). These cars continued to use the GCX mark even though General Chemical had been part of Allied Chemical & Dye Corporation since 1920 (Allied was formed by merging General with four other companies, the Semet-Solvay, Barrett, Solvay Process, and National Aniline & Chemical companies; all five continued to operate under their own names though owned by Allied.) After 1950, Allied began to put its emblem on tank cars of the five companies, including General, and in 1958 would be renamed Allied Chemical Corporation, and at that time submerging the various subsidiaries into a single operation.
Here is how General Chemical lettering appeared before the application of Allied Chemical emblems, with the division name at right (it is a 6500-gallon car built in 1948), an AC&F photo courtesy of Ed Kaminski.

Once the Allied emblem began to be applied, the division name was moved to the left of the dome, and cars looked like this (photo from the Richard Hendrickson collection, courtesy of Richard): 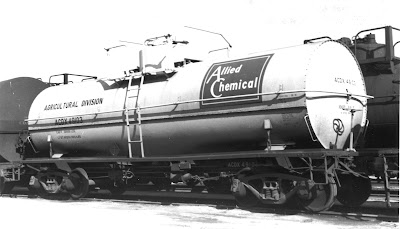 To letter this model, I used a decal set I had made up for my own use. This set was made to letter a number of cars, including the Stauffer and El Dorado cars, which have been previously described (see the post at: http://modelingthesp.blogspot.com/2011/01/tank-car-projects-for-cocoa-beach-2.html ). It also lettered my J.M. Huber car, which I will describe in a future post. To the GCX material in that set, I added the Allied emblem in Microscale set 87-0410.
Here is the completed car, in the Guadalupe local approaching Shumala on my layout. 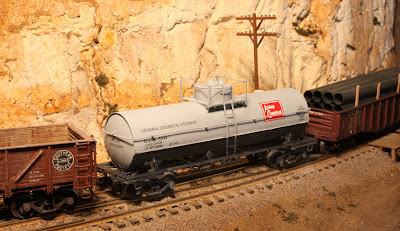 As you can see, this was a short and simple project. I am amassing a group of chemical tank cars for a chemical industry to be located at Ballard, and this is a distinctive member of that group.
Tony Thompson
Posted by Tony Thompson at 11:14 AM