For a number of years, the La Mesa Model Railroad Club, located at the San Diego Model Railroad Museum in Balboa Park, has convened 1950s operating sessions every November, on their superb layout depicting Tehachapi Pass. That’s what I meant in titling this post as “Operating on Tehachapi,” because again this year, I attended, and as usual, thoroughly enjoyed myself. And by the way, you can read about the background and goals of this outstanding layout on the club’s web site, at http://www.lamesaclub.com/ . For video of club operations, merely Google the club name and you will find lots of YouTube video files.
Anyone who would like to know more about the Tehachapi prototype, and see a great many outstanding photos of operations through the years, should consult John Signor’s book, one of his best, simply entitled Tehachapi (Golden West Books, 1983).
Rather than try to illustrate the entire layout, which would be a pretty daunting task, I will just show a few highlights. One of the nerve centers of the railroad, and a great spot for railfanning on the layout, is Caliente. Among other things, that makes it a prized assignment to serve as an operator. Here is Richard Hendrickson, holding down that duty at Caliente, in a quiet moment between trains. 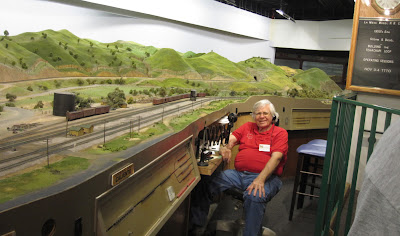 Incidentally, the La Mesa layout models Tehachapi in springtime, thus the landscape is correctly green.
The very long trains operated on Tehachapi are not excessive by prototype standards of the time modeled (1952) but are far beyond practically any home layout. Here is one illustration at Caliente, with an SP freight in the foreground siding and a long Santa Fe freight passing on the main (the Mountain Local was also in town, and its power can be seen at right). Boy, anyone liking to watch passing model freight cars can really get the full experience here! 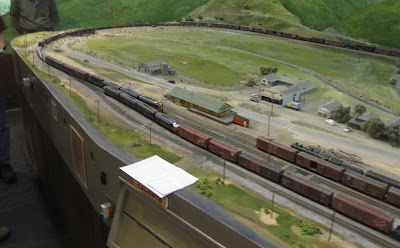 One interesting problem that can arise with the very long trains, is that they may not fit either of the two sidings at Caliente, and thus have to be doubled into the second track. That is what is happening below—the uphill SP freight obviously is too long for the siding (its tail end extends around the curve in the distance), and an approaching Santa Fe downhill freight can already be seen on the hillside above Caliente. 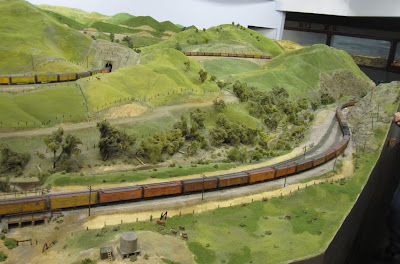 When this happens, the helper engineer (or engineers, if there are two rear helpers) have to cut off sufficient cars to clear the main, and place them on the center siding. Here Richard Hendrickson, having completed his half-day as Caliente operator, is a rear helper engineer, and has cut off enough of the trailing part of the train to clear the main; you can see the cut-off section backing down to gain access to the center siding. 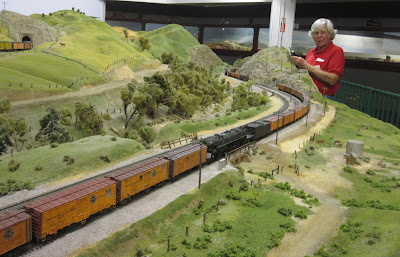 Once this is done, the SP train is in the clear for the approaching Santa Fe freight, as seen here. 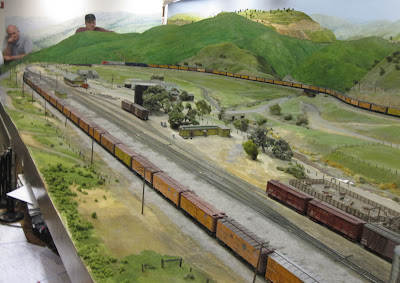 After completing this meet, the SP train continues up the grade, as we see here at the nicely modeled location of Bealville. 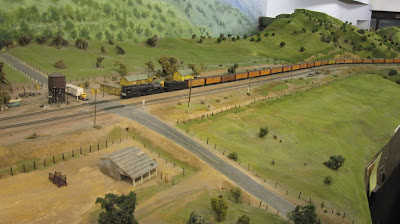 Considerably farther upgrade, the famous Tehachapi Loop is reached (relatively recently modeled by the La Mesa folks), and very long trains like this can occupy the entire loop. In this view, some Santa Fe helpers, descending as light engines, are in the siding at left. 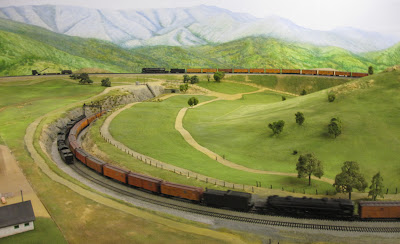 These views should give some idea of the size and complexity of freight train operations over the Tehachapi main line. I will also add a second post about switching opportunities on this layout. But I think you can probably already see why the chance to operate on this layout is so attractive to me.
Tony Thompson
Posted by Tony Thompson at 9:49 AM