Visiting the area you model

Most of us have a specific area or region in mind when we build a layout, even if it is a freelanced location. And if the representation of that area is to be convincing, it has to have the “look” typical of the prototype region. I am often surprised how many modelers just start whipping down scenery on such a layout, without too much effort to analyze and interpret the prototype.
This idea, that one should “observe and learn” from the prototype, as much for scenery as for rolling stock or structures, seems pretty obvious when you state it. But as I said, it is a far from universal approach. I first learned this from Don Cassler in Pittsburgh, when I lived there. Don is an outstanding modeler, and many scenery details on his B&O layout “ring true,” because they are based on actual prototype landscape details. My friend C.J. Riley in Pittsburgh also exemplifies this approach to layout scenery, for everything from how streams look, to vegetation patterns, to rock outcrops and more. C.J. is writing a book about this, to be entitled The Art of Illusion, which I hope reaches the market one of these days, because I always have found his scenery techniques extremely effective.
How can one make a start on this approach? Thinking about this, I was reminded of a story told me by another friend, Ken Harrison, from when he was in the East Bay Model Engineers Society, then located in Emeryville, California (now in Richmond). Scenery builders on their layout knew Ken often visited the mountains, and thus asked him questions about vegetation, soil colors, etc. for the Sierra foothills, since part of their layout was to represent that area. Ken replied that they really ought to invest in a two-hour drive and go visit the area, rather than rely on a second-hand description. That may sound like a simple suggestion, yet it goes beyond what many modelers actually do.
This brings me to my own layout, modeling the Central Coast of California near Santa Maria. The recent SP Society convention was in Ventura (I wrote a brief description of the model contest at the convention, in a previous post at http://modelingthesp.blogspot.com/2012/10/sp-society-convention-2012.html ). That location is south of Santa Maria, which meant that during the drive home after the meeting there could be some time to visit the Santa Maria area, particularly the areas along the SP between Guadalupe and Oceano, where most of my layout is sited. I’ll show just a selection of my photos.
We started at Guadalupe, then drove over the Santa Maria River on Guadalupe Road (California Highway 1) to the area where my freelanced Santa Rosalia town site would be, near the end of Thornberry Road. One objective is to see what the horizon looks like. To the south, there are the Casmalia Hills, which look like this from where Santa Rosalia would be. There is a field of vegetable plants in the foreground.

I am not sure how I will orient the backdrop at Santa Rosalia, so I also took a photo northwestwards (with another field of winter vegetables in the foreground). There is no distant feature visible here, since the Pacific Ocean shore is not far beyond the line of dunes and trees. 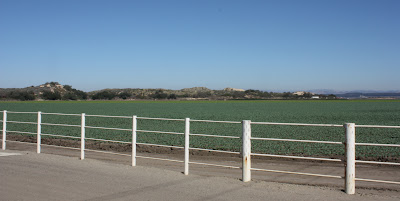 Next we drove a little northward on Guadalupe Road and soon passed a precooling plant for produce. Today these produce shipments are by truck, but back in the 1950s precooling plants prepared produce for shipment by rail. This company was not located here at the time I model, but the company name is strongly regional and thus is a candidate for a layout industry name.

At this point, Highway 1 is called the Cabrillo Highway, aligned just west of Nipomo Mesa. My layout site concept is that the Mesa could be visible from my town of Ballard, so I wanted to photograph the horizon eastward from that location. Here is a view of the western edge of the Mesa, looking in a southeasterly direction from Cienega Street, almost on the outskirts of Oceano. Again, note the row crop in the field. Any agricultural modeling I do will have to be these kinds of low-lying vegetable rows.

Next I turned to my left, so I could photograph the horizon in an approximately northeasterly direction, showing the distant grass-covered hills (the southern end of the Santa Lucia Range) and, of course, the ever-present foreground fields.

These views are taken from a location somewhat north of where I envision Ballard being located, but they do provide some horizon and foreground views. Right at the Ballard location, there are lots of eucalyptus trees, so those will have to be added to my Ballard site.
I was also interested in the packing houses still in business (or at least still standing) in Oceano, but will cover those in a future post.
I show these photos not for any great value they have themselves, but to illustrate the kind of observation of a locale which can determine vegetation as well as the appearance of the horizon. Modeling any geographic region will be more realistic if this kind of information can be gathered.
Tony Thompson
Posted by Tony Thompson at 10:57 AM