In my original post on this topic, I primarily discussed automobile license plates, for my modeling locale of California in 1953. (You can see it at: http://modelingthesp.blogspot.com/2012/11/vehicle-license-plates-in-ho-scale.html ) Highway trucks were then, as now, issued license plates of a different format, and I wanted to model those properly also.
One of the kinds of model trucks I model is Pacific Motor Trucking or PMT, the SP’s intrastate motor trucking subsidiary. (It operated within all the states of SP’s Pacific Lines, but did not have interstate trucking authority, so highway operations could not cross state lines.) Here is a Southern Pacific photo of a new 1957 Ford cab-over, and this is typical of PMT license plates in the 1950s. 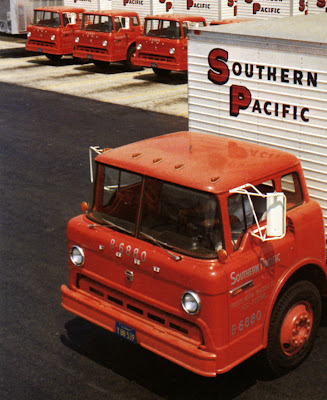 The license plate has an alphabetic character followed by five numbers. Here is a close-up view of it.

This type of plate is readily created by the same methods I described in my prior post on license plates, so that I can make plates like this:

This plate has a 1953 metal corner tag, as I described in my previous post.
I also mentioned commercial plates in my first post. Today, California classifies essentially any vehicle over 10,000 pounds gross weight as a commercial vehicle, and issues a corresponding plate. In the 1950s, in addition to the truck plates like Y93 218 above, commercial plates contained the word “COM,” as I showed in my previous post on license plates:

The California “COM” plate seems to have either been dropped altogether, or used only for a smaller class of vehicles, after the early 1950s. Accordingly, I am using it sparingly on my vehicles, in favor of the plate which has the format A00 000, shown above. These were also used for light trucks, such as pickups.
Here are some model examples. First, here is a PMT truck (custom decorated by Jim Elliot) on Chamisal Road alongside the Shumala depot, with its Y43 037 plate. You can click on the image to enlarge it. 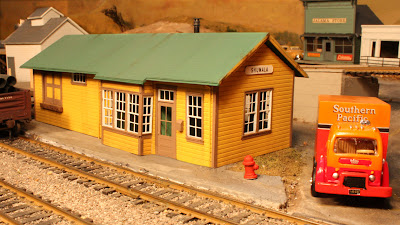 Another example is this flatbed Chevrolet, with the Zaca Mesa winery behind it, at the Nipomo Street crossing in Ballard, with a “COM” plate, D72 019. 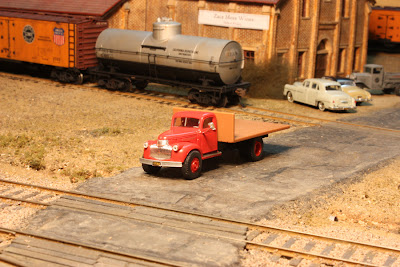 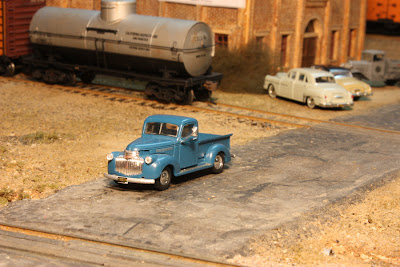 The point of this post is to illustrate that, as with automobiles, model trucks need license plates. Since many modelers tend to place a predominance of commercial buildings and industries on their layouts, it is natural that there are a corresponding lot of trucks, from pickups to semi-trailers, on those layouts, so the trucks are an important focus for model license plates.
Tony Thompson
Posted by Tony Thompson at 10:47 AM