I present talks about Pacific Fruit Express from time to time, and also touch on refrigerator car operations issues in some of my talks about waybills. In nearly every talk, there has been an audience question about the details of car operations and what is called “protective services,” meaning icing or other service to protect the load. This post is an attempt to clarify these services during the time of ice refrigeration. Much of what is in the post can also be found in the book, Pacific Fruit Express (A.W. Thompson, R.J. Church and B.H. Jones, 2nd edition, Signature Press, 2000). This book is still in print and available directly from the publisher, with free shipping.
Ice refrigerator cars had ice bunkers capable of holding around 10,000 pounds of ice, 5000 in each bunker. There were two ice hatches at each end of the car, but they opened into a single bunker at each end. Those familiar with today’s mechanical refrigeration may smile at 10,000 pounds of ice as a primitive measure, but in fact ice had a great advantage: the melting of ice consumes a great deal of heat. That in turn can rapidly cool the cargo in a car, or easily maintain a low temperature in the face of high external temperatures. It took some year before mechanical refrigeration equipment was developed with enough capacity to do the job which ice could do; the early mechanical reefers, in the period, say, from 1953 to 1960, were only suitable for loads which were already cold, such as frozen food, but did not have the capacity to cool a warm cargo sufficiently quickly.
The typical ice reefer was loaded at a shipper’s dock, then switched to an icing facility to fill the ice bunkers. Thereafter, it would be iced en route to market “as needed.” Often re-icing took place every 24 hours, but the interval could be specified by the shipper to be more often or less often, depending on estimates of en route outside temperatures. In re-icing, bunkers were simply refilled to the top, often taking several thousand pounds per bunker. At the ice deck, foremen with experience could estimate by eye the amount of ice which would be needed to fill the bunker, and the cost of that ice was charged to the shipper.
Here is a photo of a PFE workman at Ogden, Utah in 1962, carrying a clipboard on which to note the ice used. He is about to chalk a check mark on the inside of the hatch cover, to show that he has recorded the ice usage for this car, which had been chalked by a previous worker. This is a PFE photo from my collection. 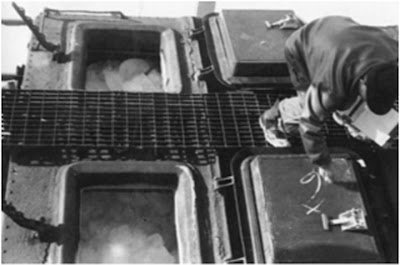 Those icing costs, the official terminology of the services, and all details of providing services, along with the corresponding charges, were specified in the Perishable Protective Tariff, issued from time to time by the National Perishable Freight Committee in Chicago. For example, Tariff No. 11 was issued in 1940, Tariff No. 17 in 1957. These tariff had sections for each type of protective service. Most icing services were in Section 2; ventilation (open hatches) in Section 3; heater services to protect against cold in Section 4; and mechanical refrigeration in Section 5. This might be noted on a waybill as something like “CPS 3,” meaning “Carriers Protective Services, Section 3,” which would be ventilation. These tariffs are hundreds of pages long and contains remarkable levels of detail, far beyond what most modelers would need or want to know.
A much briefer and more convenient document, though still highly detailed, is the Code of Rules for Handling Perishable Freight, issued by the same committee, in the form of a series of circulars. Circular 20-A was issued in 1933 and by 1965 the series had reached Circular 20-F. These circulars of course use the same language as the tariffs. Let’s quickly summarize some of that language.
A shipper could order a car “pre-iced.” This means that the empty car had its ice bunkers filled before it was spotted at the shipper’s dock. This would help cool a hot car, in summer weather; and as the produce was loaded into the car, perhaps still warm from the field, there would be cold air inside, to start cooling the load toward its shipping temperature. But if the shipper was precooling his shipments in his own facility, there was much less need for pre-icing the car, and he would not want to pay for the pre-icing service. Note the terminology: that cars were pre-iced, loads were pre-cooled. This is the tariff language.
Once the car was loaded and picked up by a switch crew, it would be “initial iced,” meaning filling the bunker, whether or not it had been pre-iced. It would then head off toward market, being re-iced as needed in transit, perhaps several times if moving all the way across the country.
I have used these terminology details in my model waybills, as shown for example in this post: http://modelingthesp.blogspot.com/2011/08/waybills-10.html . I have varied the pre-icing and CPS sections appropriately for specific cargoes.
Modelers sometimes develop odd ideas about how ice was placed in bunkers. In actuality, it was done with three possible sizes of the ice (again, from tariff rules). These were as follows: “chunk,” meaning not more than 75 pounds per piece (a standard PFE ice block weighed 300 pounds, so that is a quarter of a block); “coarse,” meaning about the size of a melon, 10- to 20-pound pieces; and “crushed,” meaning about the size of a man’s fist. Any smaller than that, and there would not be large enough air spaces among the ice pieces to permit good air circulation, which of course was essential so that cold air from the bunker could move freely into the load space and displace warm air. But full 300-pound blocks were not placed directly in bunkers.
Other icing services included “top icing,” which involved blowing finely crushed ice across the top of the load inside the car, a good way to keep leafy vegetables moist in transit, and “body icing,” in which blocks of ice were placed among the boxes of produce. Some en-route icing stations could provide re-top-icing services.
These prototype details can be the basis for modeled operations and paperwork, such as waybills. Personally, I like to include what I can of prototype practices like these in the way I operate my layout.
Tony Thompson