The first all-steel box car adopted as standard by the American Railway Association or ARA was a sound design, but unfortunately adopted near the depth of the Depression. Accordingly, not many railroads had the funds to buy this design, and orders only totalled 14,500 cars. Each purchaser is thoroughly described in Ted Culotta’s book, The American Railway Association Standard Box Car of 1932 (Speedwitch Media, 2004). If you’re interested in these cars and don’t have this book, I encourage you to seek out a used copy from an on-line bookseller, such as Powell’s Books (their site is at: http://www.powells.com/).
In 1934, the ARA and several other associations combined to form the Association of American Railroads (AAR), and work was already in progress to modernized the 1932 design further, in particular to raise the inside height of the car from 9 feet, 4 inches to ten feet. The resulting design, completed in 1936 and adopted as standard in 1937, was very widely purchased (over 150,000 cars) and was the first truly standard box car which received wide adoption.
But some of the railroads which did buy the 1932 car bought substantial numbers of them, and they are significant railroads: the Missouri Pacific (with subsidiaries, purchasing over 3000 cars) and the Seaboard (2000 cars). I had long wanted to roster one of the 1932 cars from each of those roads. The Seaboard cars are especially interesting because the railroad chose to use the flat steel roof and ends reminiscent of the ARA’s proposed all-steel box car of 1923 (not adopted as standard), and widely used on the Pennsylvania X29 and Baltimore & Ohio M-26 classes. Among the 1932 cars, only lesser orders from Louisiana & Arkansas, NC&StL, and Warrior River Terminal (WRT) had the flat ends and roof of the Seaboard cars; most others had Dreadnaught ends.
My freight car fleet already contains a postwar Seaboard PS-1 box car, but I wanted to add a second Seaboard car (for one rationalization of this choice, see the comments on the Seaboard in my post on freight car fleets, at: http://modelingthesp.blogspot.com/2012/12/choosing-model-car-fleet-numbers-part-2.html ). The 1932 ARA car seemed like a distinctive and appropriate choice.
Here is a photo of one of the Seaboard cars, image provided to me by Bob Charles (now in the Bob Charles photo collection of NMRA), showing the car at Harrisburg, Pennsylvania on August 31, 1946. This photo is also reproduced in Ted Culotta’s book. 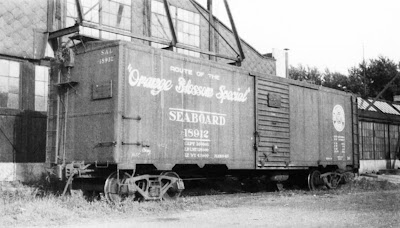 Because of the ends and roof, which constitute a similarity to the X29, several makers of HO scale X29 models have found it impossible to resist decorating them in the Seaboard scheme, from Train Miniature to Red Caboose. But that car body is not the same as the 1932 ARA design. The most notable difference is in the inside height: 8 feet, 7 inches for the X29, 9 feet, 4 inches for the 1932 ARA car.
When Atlas released correct 1932 ARA box car models, I was able to acquire a Mopac car but did not find a Seaboard version. No real problem; I picked up a used car of the correct body, which was  lettered for WRT (who only bought 20 of these cars) and simply repainted it boxcar red. This was motivated by my possession of an outstanding decal set by Ted Culotta for Seaboard box cars, including this class of cars, his set D103, so I knew I could apply quality lettering.
The model I purchased had a distorted running board, probably from the factory, so I replaced it with stripwood. The lateral running boards were all right, so they were re-used. The Seaboard’s cars came in two batches of 1000 cars, the 17000-series cars in 1934, the 18000-series cars in 1937. The latter had a conventional location for the AB valve, as does the Atlas model, so I chose that group to model. This meant that an Ajax brake wheel had to be substituted for the Universal wheel on the WRT model, an easy change. (The Ajax wheel can be seen in the photo above, if you click to enlarge.)
I also replaced the factory couplers with Kadee #58 couplers, since those are becoming standard in my freight car fleet. The factory trucks have sideframe contours quite similar to the Seaboard trucks shown in Culotta’s book, and they have the correct spring planks, so I was happy to retain them.
Once all this model work was completed and the decals applied and oversprayed with flat finish, I weathered the car. I had chosen lettering typical of the mid-1940s on the Seaboard, so I applied a moderate weathering for my 1953 era, followed by patches of fresh paint, onto which I added current repack and reweigh lettering. Lastly, I added route cards, chalk marks, and a final overspray of Floquil Dullcote. Here is the finished car. 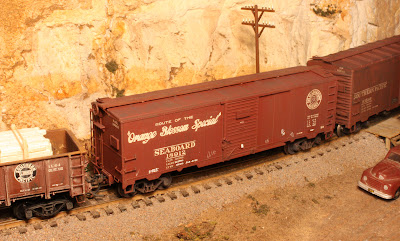 Though not a demanding project, and not of great intrinsic significance, this model does illustrate how one can use the resources available in the hobby today to match a model to a prototype car.
Tony Thompson
Posted by Tony Thompson at 10:45 AM