The point of this post is not to hold forth about rust itself, but to talk about effectively modeling rust. Some objects that we model develop rust in spite of protective measures, such as a layer of paint; other objects, such as couplers, are unpainted and simply will rust, unavoidably. There are many facets to this topic, but I will focus on just one to start, the one I just mentioned, couplers.
We all know that steel rusts when exposed to weather. And the sequence by which it happens is easy to observe for yourself. Put a piece of steel out in your yard, after cleaning with, say, steel wool, and observe what happens. If you live in a desert area, you may have to wait for rain, but in most of the U.S. moisture will arrive fairly quickly at this time of year. The first film on the steel will be a yellowish color, followed fairly soon by a reddish-orange that is a familiar rust color. But that changes to a solid brown color before long, and with further exposure, the brown gradually darkens.
So how do you show rust on your modeled objects? If it is something which has been exposed to weather only, and for some time, then it should be dark brown. Not light brown, not reddish-brown, but dark brown. If it is something which just had a paint failure, such as a scratch, you can show the pale yellow (indicating the rust just began within a couple of days) or red-orange for well-started rust, but remember that these indicate recent beginnings of rust.
There are two common railroad components which seem to be misunderstood by many modelers. First, couplers, the topic of this post. These are not supposed to be painted (though you will find exceptions), and they start rusting even before they are installed in a freight car. The great majority on almost any layout ought to be dark brown or darker. Why darker? Because dirt and oil get onto them also, and only the working faces, which get abraded, will be other than the very dark brown.
Let’s look at an example. This is a car about 15 years old, and probably it still has its original coupler. Here it is:

You can see what I described: a rather dark coupler body, with lighter brown rust on the working areas. And by the way, notice also the wheels, to which I will return in a moment: the wheel faces are entirely black.
Here is another coupler example, this a box car about five years old in an SP photo. It too has a rather dark coupler body with lighter working faces (click to enlarge):

My point is that couplers are dark and hardly noticeable as brown (except working faces). I will show a model example in a moment, but before I do, I should comment on my second topic, wheels. The same color appearance just described for couplers is also true of wheels on the inside of the wheelset, though the outside of wheelsets, the side we normally see, was so covered with accumulated journal oil plus dirt as to be entirely buried in blackish gunk. The flat car photo above shows this clearly. But you can do the dark brown rust on the inside surfaces of wheels if you like—it’s just pretty hard to see on other than tank cars.
It’s worth showing a couple of images of mature rust surfaces in bright lighting to display the color (though model colors indoors should likely be darker). Here is a the body of a cast steel clamp: 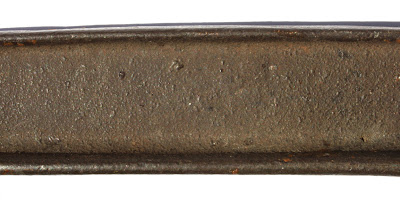 And this next example shows how rust can develop and deepen when the steel is confined in a cavity (this is not typical of steel exposed in the open to moisture and lots of oxygen). In my view, few model railroad objects would need to be represented this way.

My usual approach to couplers in HO scale is to paint them with a flat, dirty black, with perhaps some dark brown on outer faces. Relatively few of my couplers have the entire body dark brown. I usually use Floquil “Roof Brown,” but a darker color would be as good or better. The goal is a pretty dark surface.
Here is just one example, in which the dark body of the coupler has been accented with brown. It is the chemical tank car described in a previous post (at: http://modelingthesp.blogspot.com/2012/10/small-modeling-project-icc-104-tank-car.html ). You can click to enlarge. 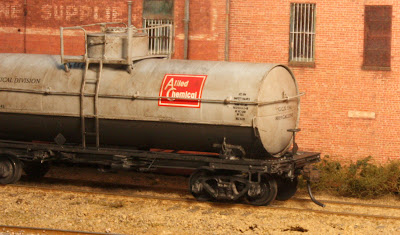 These examples show the way well-aged rust looks, and my primary example is the coupler surface. Other rust appearances will be the subject of a future post.
Tony Thompson
Posted by Tony Thompson at 3:33 PM