In 1988 or thereabouts, Precision Scale Company imported a slew of HO scale tank cars, with somewhat simplified construction but overall good proportions. These were apparently all “chemical” tank cars, with insulated jackets and platforms around the dome. (I think this application of the term “chemical” to all such tank cars originated with Athearn, years ago.) PSC did several car sizes, including at least 8000- and 10,000-gallon ICC 104 (non-pressure) cars, and 11,141- and 12,000-gallon ICC 105 (pressure) cars. The latter two might seem quite similar, but in fact the 12,00-gallon car was significantly longer (and slightly smaller in diameter) than the 11,141-gallon model. I know about these four because I have at least one of each: 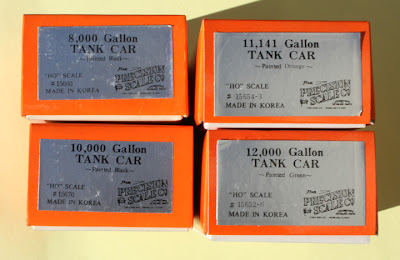 These cars were fairly cheap and I bought a bunch, thinking that even if the paint schemes were poorly done or inaccurate, I could always repaint and re-letter them for other purposes. As it happens, the two larger-size cars did not even come with any of the smaller lettering for capacity and other specifics, typical of tank cars, and so would need additional decals even if the paint schemes were used as-is. But one of the 8000-gallon cars seemed like it could be used as it was supplied, a Celanese Chemical car.
For those who may not remember or never saw these models, here is a photo of the kind of minimal box in which they were delivered. 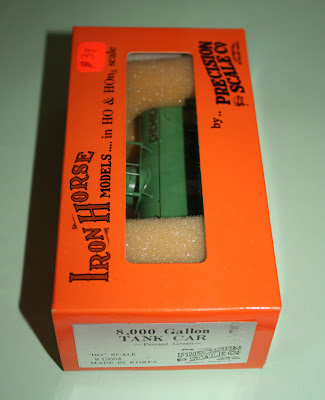 Examining the model out of the box, it was immediately evident that a narrow, near-scale-width coupler platform was provided, which naturally suggested use of the Kadee #78 couplers in assembled form. Sure enough, with a small amount of filing to enlarge the end-sill opening slightly, those couplers did fit all right. Here is how they looked when installed. Also note here that the car was manufactured as an all-green car, but in fact the Celanese cars had black underframes. This was corrected later. 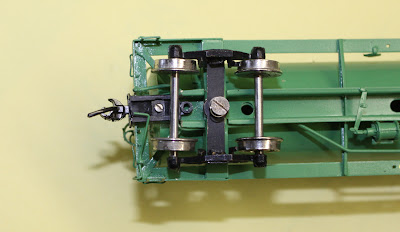 Though not too evident in the photo above, the trucks had very shiny silver wheels, which have to be fixed. The outer surface of freight car wheels were incredibly heavily coated with a crust of dirt and journal oil, and should be a dark gray (as I explained and illustrated in a previous post, at: http://modelingthesp.blogspot.com/2012/12/rust.html ). I usually paint them Floquil Grimy Black, which is what I applied to this car.
Incidentally, the system of truck attachment supplied with most brass freight cars, involving shouldered screws and springs, is fine in concept, but in almost all cases the springs are much too long and exert almost enough pressure to prevent truck rotation. This is just asking for derailments in operation. My solution is to cut the spring height in half, which retains some spring pressure but reduces it to a useable minimum.
This particular Precision Scale car came with some decals applied, others in a bag with the model. My next step was to complete the decal lettering. The photo shows the car number decal getting a final adjustment. You can also see here that the shiny wheels have been painted. 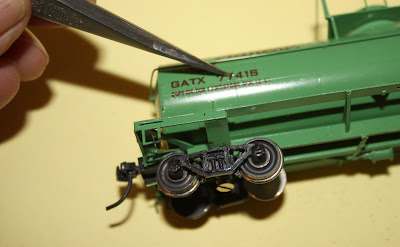 The last of the model work was attaching the ladders, which were provided separately in the box for this model. I fitted them in place with CA. Then the underframe was hand-painted with the same Grimy Black as the wheel faces.
The model was quite glossy out of the box. I oversprayed it with Dullcote to permit weathering. My acrylic wash method is water-based, so it’s essential that the washes will “wet” the surface, rather than bead up on the glossy finish. (My method is briefly summarized in the clinic handout by Richard Hendrickson and me, available on Google Drive via this link: http://modelingthesp.blogspot.com/2011/10/weathering-clinic-handout.html .)
The last steps were to add placards and route cards to the car, and a final protective overspray of Dullcote. (I used a “Dangerous” placard on this car. Such placards in model form were described in a previous post, at: http://modelingthesp.blogspot.com/2012/12/tank-car-placards-more-on-modeling.html .) The Dullcote corrects any residual glossiness of the acrylic weathering, and more importantly, protects against scratching the acrylic film when handling a car.

This PSC tank car makes a nice addition to my fleet of cars carrying chemicals to and from the chemical industry on my layout, and illustrates the kinds of simple steps needed to make such a brass freight car ready to operate.
Tony Thompson