In the first post on this topic, I showed my mostly completed Diamond Scale turntable, a 90-foot version, and described what was needed to complete it. The critical next step was addition of handrails along the walkway on each side of the track. I also showed prototype examples of Southern Pacific turntables with wooden handrails along their walkways (see that post here: https://modelingthesp.blogspot.com/2021/10/completing-turntable.html ).

I stated in that preceding post that although a number of SP turntables had wooden handrails on the outside of each walkway, it was also true that many did not. Instead, they usually had handrails made from pipe. Below is a 1938 example from West Oakland (R.J. McFarland photo, Arnold Menke collection). You may need to click on the image to enlarge it enough to see the handrails.

An even more relevant example is Port Costa, shown below with an Alco switcher, SP 1308, crossing the table (Bob Morris photo). It’s relevant because the roundhouse on my layout is the Banta Models kit for the Port Costa roundhouse (visible at left), so the turntable in front of it ought to look like this. And we may also note that this turntable has no arch, thus isn’t electrically operated in the usual way. 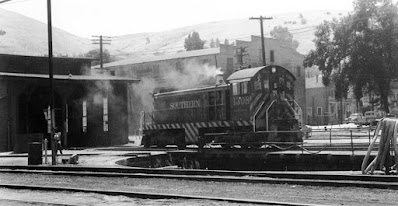 That naturally made me feel that a pipe handrail was my preferred choice, and that I could omit the arch.

I should emphasize that for a realistic SP turntable, one could certainly choose either wood or pipe handrails. It seemed to me that for durability and relative ease of assembly, a pipe handrail made from brass wire would be straightforward to build, sturdy in use, and realistic. And it would be a suitable companion for my Port Costa roundhouse.

How might I make up such pipe handrails? The obvious way was to solder the posts and longitudinal pipes from brass wire, using a plan of the tie spacing. How could I make an exact plan, so that I could be sure of my post spacing matching the tie spacing? It’s simple. I just put the Diamond Scale turntable bridge on my flat-bed scanner and made an image of it, then printed it out full size. Here’s how it looks (reduced in size to fit here):

Of course, printing a scanned image like this might be off a few percent in some situations. So I checked the printed image against the actual turntable, and as you see below, the match is quite accurate. Thus I can be confident that the image can be used as an accurate template for the handrail assembly. 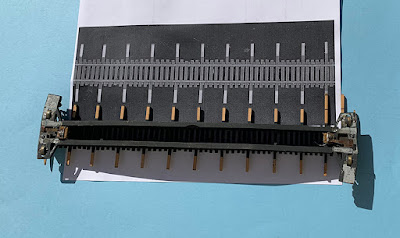 The wire size to be used for these handrails was the next issue. I first thought about an accurate scale size, perhaps in the range of 2 scale inches in diameter. Then I remembered that I have concerns about durability of these handrails. I feel pretty sure that pipe handrails modeled with brass wire would be more durable that wood ones (whether modeled in styrene or actual wood). After spending some time looking at my brass wire stash, I chose 0.029-inch wire, a little oversize but easy to solder.

The process of  building and installing these handrails is underway, and I will report on progress in future posts. Meanwhile, I went ahead and assembled the control cab. As I showed in the first post in this series (link provided in the first paragraph of the present post), the kit’s cab is quite similar to the one on the Eugene turntable.

The cab comprises four soft-metal castings for the four walls. I first cut and fitted clear plastic sheet for the windows, easy while the walls were flat, but waited to install them until after painting. I then assembled the walls with canopy glue, and painted the interior a light gray. I will paint the resistor grids a contrasting color, before painting the exterior. Here is the cab as it is at this point:

The turntable bridge has a pair of longer ties to support the cab, so it will be simple to install once the walkways are built. More later!