One of the model freight cars that I most often see on visited layouts that cry out to be “improved” are flat cars. Not because the car body itself is in any way wrong (though it may be), but because of the deck. This involves a number of issues.

There is a myth among many modelers that the lumber of flat car decks was creosoted, and doubtless some railroads at some time periods must have done so. But non-creosote types of pressure-treatment for wood that would see outdoor service were available before World War I, and Railway Age articles in that period of rapid change in freight car technology do refer to these treatments. My own impression from photographs is that even in the 1920s, and certainly by the steam-diesel transition era, creosoted decks were rare to non-existent.

Of course a bigger issue in the color of decks is simple aging due to sunlight and changes in the wood with age (even wood inside the walls of structures, exposed to no sunlight, darkens considerably with age). Of course any flat car fleet would contain a few cars, either freshly delivered or freshly re-decked, but most would have varying degrees of darkening from age.

I have discussed weathering methods to achieve these changes in deck color in my “Reference pages,” with links at the top right of this blog post, and in a prior post, at: http://modelingthesp.blogspot.com/2011/05/weathering-flat-car-decks.html . Below are examples. 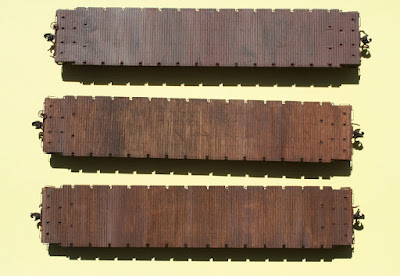 In this photo, the uppermost car has a plastic deck, and the lower two have wood decks. All have been scraped, gouged, scored and roughened to give some realistic texture. Then all have been worked with acrylic tube colors, not washes but painted, mixing Neutral Gray, Burnt Umber, and Black. These decks look considerably more realistic than fresh wood or, worse, freight car color. Few railroads bothered to paint flat car decks.

Yet another issue to be recognized is wear and tear. Blocking and other dunnage for loads was routinely spiked to the wood deck. Over time, this steadily tore up the deck surface. For any flat car of moderately advanced age, it is difficult to reproduce these levels of damage in models. In addition, many consignees receiving a shipment on a flat car simply left the old dunnage, spiked down or not, for someone else to remove. The same goes for miscellaneous steel strapping, cables and ropes, and sometimes even tarpaulins.

There are lots of examples out there in prototype photography Let me show just one, a Richard Steinheimer photo (DeGolyer Library). It was taken from Glendale Tower, and the Southern Pacific double-track main is here crossing the Pacific Electric’s double track running in the center of Brand Boulevard, the street you see (notice the overhead wires). Coming toward the camera is SP 6153, heading up Train 804, a train from Bakersfield, and a westward freight out of Taylor Yard is passing it on the right. Our subject now, of course is the two flat cars. 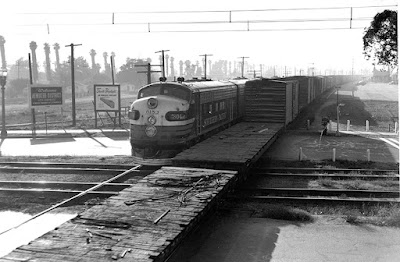 Doubtless, Steinheimer was not interested in the flat cars, except that they provide a gap in the train though which he could photograph the oncoming diesel locomotives. But even a glance shows the rough condition of the foreground car’s deck, which is in sunlight (Train 804 shadows the other one). Let’s look at it more closely.

There are numerous wood blocks or strips in places around the deck, a jumble of what looks like steel strapping at the far end, and some other material, strapping or cable, nearer the camera. And the deck surface is quite extensively distressed.

Would all this junk remain on the flat car when it is spotted at the next shipper’s siding? Likely not. Most yards had a clean-out track, and cars about to be delivered would be cycled through there if needed. But the car we see above must be destined to somewhere well beyond Taylor Yard, since they haven't cleaned it.

It’s my belief that a flat car fleet ought to contain at least a few cars showing a bunch of dunnage. Here is one example, modeled by Richard Hendrickson, and it certainly is a clear example of what I’m talking about (it’s a Proto2000 model). Of course, if the same flat is to accommodate (removable) loads also, the dunnage has to be judiciously placed so as not to interfere with those loads. This model also shows considerable distressing of the deck (you can click to enlarge if you wish.)

The comment about loads reminds me to mention that in general, I am an advocate of removable loads. Occasionally a load requires complex tie-downs and is better installed as a permanent load, but I would usually rather cut some corners on the completeness or accuracy of tie-downs in favor of a readily removable load.

And lastly,  this commentary on flat car decks reminds me that I, too, have a few cars with far-too-clean decks, and will need to pull a few cars back onto the bench for some work.