The eleventh anniversary of this blog

Every year, on December 8, I recollect the beginning of this blog, on that date in 2010. And once again, as I look back over the years, and glance at the statistics to date, I am as amazed as I ever was with the interest and readership. To date I have put up about 1350 posts, and there have been over 3000 comments on the posts (and many more beyond that in the form of off-list emails to me). Further, on November 26 just past, the total page views edged past 2 million views. Two million!

Over the years, there have been some slow periods and a few unaccountable highs, but there remains, over recent years, a gently rising average. Below is a screen shot from Google‘s data, taken today. The current month, of course, looks low because it’s just begun. Recent months have been running around 18,000 page views or so a month.

I like to look back over each previous year, to remind myself of the topics that seemed to predominate. For this year, by which I mean most of 2021, one prominent topic is that I was wrapping up a long series of posts about freight car graffiti (you can use that phrase as a search term in the search box at tpo right, if you would like to see some of those posts.)

There were also a number of posts about layout operation, both on my own layout and as a visitor to others’ layouts (“operation” is a good search term). Operation, of course, is how a layout comes alive, and hopefully, brings its builder’s vision into being. That’s often how I feel when a visiting crew operates on my own layout, and I think most layout owners feel the same way.

As in most years, there are a great many posts having to with freight cars, how they are built and how they can be operated realistically. That’s entirely natural, as freight cars are in fact my principal interest in the hobby, both their prototype history, and modeling techniques to represent them in HO scale.

For some years now, I have been interested in learning more about prototype waybills and how they were used in the pre-computer era, and during most years I have posted several times on this topic (“waybills part” as a search term would get you into the numbered series of those posts). This year there have been 14 of them, bringing the series to no. 93. I guess this means that I am still learning, and that’s a good thing.

I stopped the other day to consider the state of my layout. Though not complete, parts of it are about as complete as they are going to get, which is to say, as complete as I want. The view of East Shumala below, with Pismo Dunes Road along the edge of the layout,  is such an area. Yes, there are a few more things that could be done, but they are (in my mind) fairly minor. 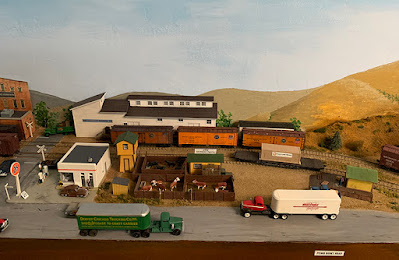 On the other hand, I have no illusions about areas with glaring voids, such as the need for a structure to house Channel Islands Kelp Products, represented at the moment with only a slip of paper. Of course this or any “industry” can ship and receive cargoes without an actual building, but yes, I do intend to add a structure here. The business, by the way, harvests giant kelp and red kelp just offshore, producing alginate, agar agar, and carageenan for commercial use. 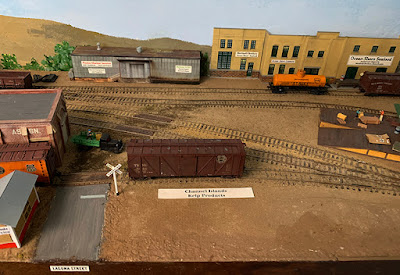 This small remaining group of layout tasks to be done does not arouse any great urgency, but I do have plans for most of what’s still missing. Maybe by next year I can show more areas that are complete. But until then, this is how things look on the eleventh anniversary of this blog.

Posted by Tony Thompson at 3:13 PM