I was tempted to call this “An Appreciation,” but Steinheimer’s reputation needs no appreciation from me. Let’s just call it a reminiscence. I have always been surprised to hear younger modelers not completely sure who Steinheimer was. I want to begin with his many publications.

Dick was eleven years older than me, and as it happened, attended the same high school as me, Herbert Hoover High School in Glendale, California. He began railroad photography in 1945, when he was 16, and soon graduated from a Baby Brownie to an Argus and, in 1947, to a Speed Graphic.

Even his earliest photos show a distinctive “eye” for composition. I often realized in the 1950s, when I would open a new copy of Trains magazine, that I could recognize a Steinheimer photo at a glance. David P.  Morgan, editor of Trains, was an early enthusiast of Dick’s photography and published it often.

But I think that there had not been major attention to Steinheimer beyond readers of Trains until 1963. Two books were published that year featuring his photography, the first of many. One was Backwoods Railroads of the West (Kalmbach), a 9-1/4 x 13-inch horizontal format book, entirely of his images. 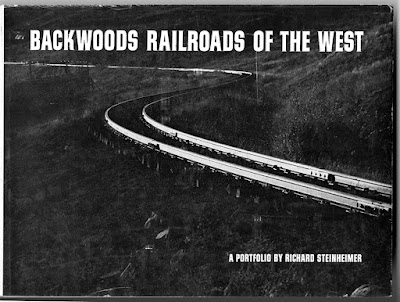 The book was not commercially successful, and both Kalmbach and Dick were disappointed. Some said it was the word “West” in the title, with so many railroad enthusiasts living in the eastern two-thirds of the country. Others thought it was the word “Backwoods,” since that suggested small, obscure railroads, though in fact many mainline railroad images are in the book. But it remains a marvelous collection of Steinheimer photography, readily purchased on line.

The second was The Central Pacific and Southern Pacific Railroads, by Lucius Beebe (Howell-North ), an 8-1/2 x 11-inch, 632-page book, which as the front cover mentioned, featured 121 of Steinheimer’s photos. This seems to have suddenly created recognition from many who had not fully appreciated the occasional images in Trains. 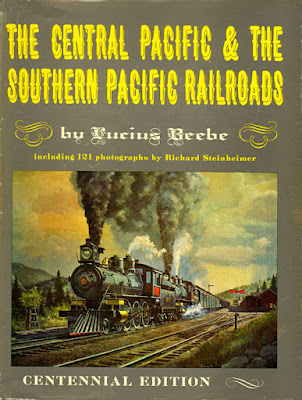 A long-gestating project of Dick’s was a collection of his marvelous photographs of the Milwaukee Road electrified lines, entitled The Electric Way Across the Mountains (Carbarn Press), 1980. Dick often spoke of this book as his finest work, and I had the pleasure of working with Dick and his wife, Shirley Burman, to produce a second edition of the book, published by Signature Press(2005). 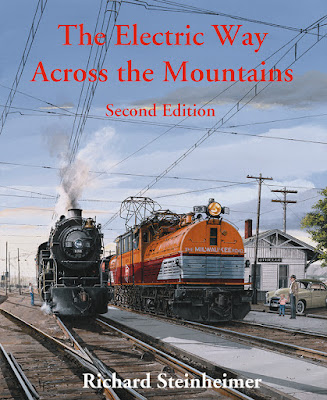 In 1982 and 1983, Interurbans Press in Pasadena produced a pair of excellent photo albums, entitled Growing up With Trains, the first a Southern California album by Dick and his longtime friend and fellow photographer, Don Sims, the second by Dick and Ted Benson. Volume 2’s cover is a photo by Steinheimer of Dick Dorn in the snow. Both are 8-1/2 x 11-inch softcover books. 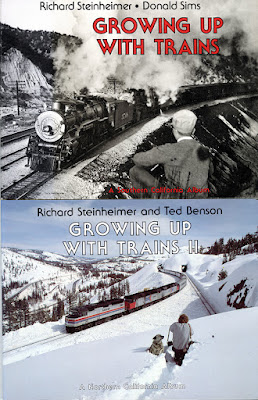 There have been two beautifully produced overviews of Dick’s work, both with a strong biographical content. The first was Done Honest & True (Pentrex, 1998), with an appreciative text by Ted Benson. It features many of Dick’s finest photos. It’s a 9 x 12-inch vertical format soft-cover book. The other is the monumental and truly serious photographic compendium, A Passion for Trains (W.W. Norton, 2004), with an informative text by Jeff Brouws. (You just know it’s an art book when the pages aren’t numbered.) Roughly 12 x 12 inches in size, it’s a magnificent reproduction of Dick’s best work, and I have said to a number of people that if you just want one Steinheimer album, this is the one to have. 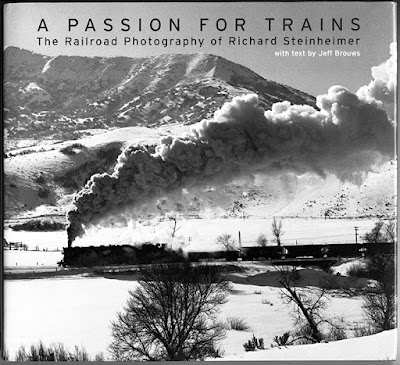 This isn’t every Steinheimer book, but it is a good sample. I also want to offer some personal impressions of the photographs themselves, but will reserve that for a future post.