In the previous post, I showed a range of prototype photos to support a discussion of what was involved in ice refrigeration on the railroads. Though I alluded to modeling aspects, that was not the focus of the post (you can read it at: https://modelingthesp.blogspot.com/2021/12/reflections-on-ice-refrigeration.html ). In the present post, I discuss how we can direct model icing.

The first decision about any model perishable cargo is whether it would be iced or ventilated. Ventilation, in which ice hatches were latched open at about a 30-degree angle, allowed air to pour through the car when the train was moving. If for example the cargo was tomatoes, ideally shipped at about 50 degrees F, external temperatures in that range would be just fine. So certain cargoes, at certain times of the year, would move under vent service, saving the cost of ice.

Realistically, at least in HO scale, it is impractical to open and close model ice hatches. Thus one ordinarily models the individual refrigerator car with hatches either open or closed. Some years ago, I offered a post about this, at: https://modelingthesp.blogspot.com/2013/07/modeling-open-ice-hatches-on.html .

But let’s focus on icing. The first thing to realize is that, with very few exceptions, all perishable loads were “initial iced,” as the tariff terminology was, as soon after loading as possible, filling the bunkers. So all outgoing loads under ice refrigeration, if you are modeling a shipper of perishables, would be iced. In layout operation, this can mean that crews are directed to move all departing perishables to the ice deck to fill the bunkers.

Or of course you can give more explicit directions. Back when I was using Allen McClelland’s update to the Doug Smith card system, one of my 3 x 5-inch car cards, with perishable waybill inserted in the pocket at right, might look like this: 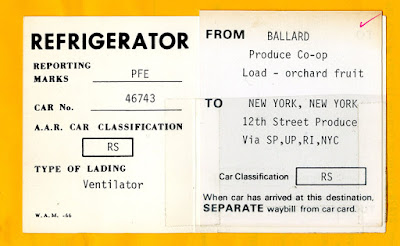 In that day, I didn’t know much about waybills, so was using the skeleton form shown.

To direct icing, and other service details like coopering doors or cleaning out cars, I created “service order” slips like this (shown oversize):

Then of course this service order was inserted into the waybill pocket, so a crew picking up this car would have the directions in front of them. This certainly worked, because the service slip was impossible to ignore, as you can recognize below. 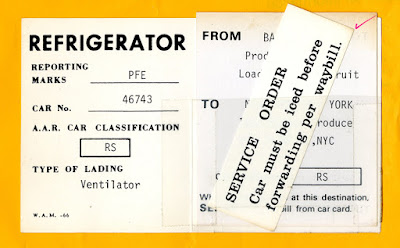 But moving on to a more realistic waybill for perishables, I abbreviated the substantial “Protective Services” section of the prototype waybill to create the segment you see below, just under the routing information. This includes reconsignment (which may happen en route), and whether to pre-ice, initial ice, and which CPS section applies. The waybill below only calls for initial icing. 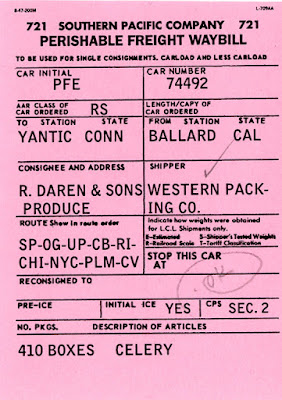 Note that there is a box labeled “CPS,” meaning “Carrier Protective Services.” The CPS tariff has chapters or Sections for each kind of protective service, and Section 2 is for standard types of icing.

For one of my packing houses, seasonal Guadalupe Fruit in the layout town of Ballard, they do order pre-iced cars because they don’t have any pre-cooling facilities for their outgoing produce. This is shown in a waybill very clearly, as you see below. This is still Section 2 CPS, just adding the pre-icing step. 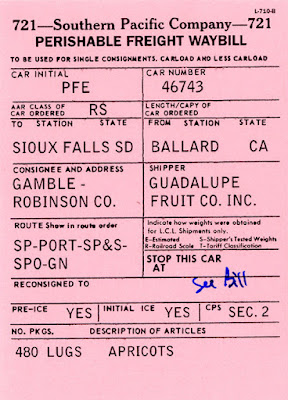 If a car is to move in ventilation service, that falls under CPS Section 3, and that is noted on the waybill, but in fact, the car spotted to be loaded would usually be a model with ice hatches already open. This particular load, blending wine in wood barrels, is effectively being shipped in an insulated box car, so likely the season is fall or spring. The agent filling out the waybill has written in, “vent svc.” to make sure the crew knows what they are looking at, though it’s redundant with “CPS Section 3.” 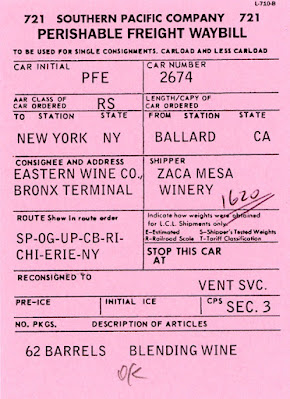 So waybills, of whatever kind, are one way that icing can be called out in layout operations, depending on how much detail is wanted. Another way would be to provide the crew with a written message from the agent. For example, here is an agent message (using a spare telegram blank, as was common on SP), for my town of Shumala, where there is an ice deck. For more discussion about agent’s messages, you may wish to read my prior post at: https://modelingthesp.blogspot.com/2015/06/operating-with-agent-messages.html . 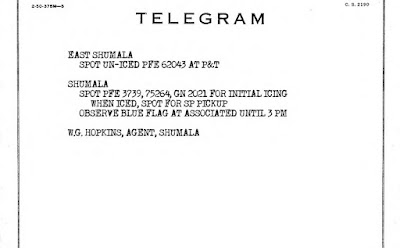 On my layout, cars needing icing are all outbound loads, simplifying communication. So far, I have not had reason to model icing needs on passing shipments on SP’s Coast Route. If they did arise, I would use an agent’s message to tell the crew what to do.