This year’s Southern Pacific Historical & Technical Society convention was in Modesto, California, last week. It’s the 42nd year of the society, though not the 42nd full convention, as many early ones were really one-day meets. This was the first convention since the pandemic, and naturally many of us were delighted to see old friends and make new ones, though as many organizations have discovered this year, attendance is half to two-thirds of pre-pandemic levels. But I enjoyed it quite a bit. It was well organized and ran smoothly.

The city of Modesto was actually interesting to visit. Their downtown, like most smaller cities, has greatly changed, and they have managed to make an “entertainment” area, with many restaurants and cafes in place of the old business district, and the atmosphere was pleasant. They have even restored the famous “Modesto arch,” first installed in 1912 and greatly deteriorated by its centennial in 2012. But the city and many private donors stepped up to restore it, and today it looks beautiful. 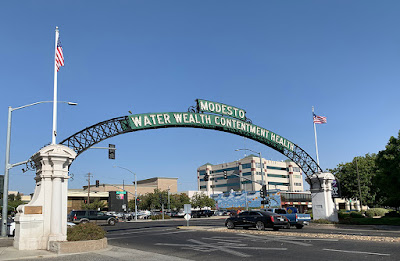 (They are also in the midst of restoring the large and distinctive Modesto SP depot, but completion of that looks someways off.)

One thing that a visitor notices again and again is the pride the city feels about the fact that they were the place the famous movie, American Graffiti, was filmed. Not only the plaques in the “Walk of Pride” but many other evidences can be seen. I liked this small billboard for a car club, the Pistons, on a wall downtown.

In the convention, the primary activity was presentations, with a full schedule every day. There were some quite good talks, including local photographers Ted Benson and Tom Taylor. One I enjoyed was about making “perspective” maps, by John Signor. Below you see John about to begin his presentation.

My own talk, about “Modeling Transition-era SP Motive Power,” was on the schedule too, and the handout for it was provided three days ago on this blog (see it at: https://modelingthesp.blogspot.com/2022/09/handout-modeling-transition-era-sp.html ).

The contest room was pretty lightly populated. I entered my Maintenance of Way kitchen-dining car, which will be familiar to anyone who has looked at even a few photographs of my layout. I thought it might be a good entry because it does represent some modeling effort to modify a commercial kit (described here: https://modelingthesp.blogspot.com/2013/04/modeling-some-sp-mow-cars-part-3.html ). Below you see it in the contest area. Since it was the only entry in the MOW category, it did win a prize.

I should mention a dramatic entry in the contest, by new SPH&TS Board member Andrew “AJ” Chier. He brought a train with six piggyback flat cars that were loaded with two trailers each, and two empty flat cars so you could see how they looked also. Below is a view of a loaded car. What is noteworthy here is that the trailers are one-piece models, 3-D printed by Andrew.

I include below a shot of one of the empty flat cars. This isn’t exactly how an empty SP TOFC car would look (see Chapter 13 in my book on flat cars, Volume 3 of Southern Pacific Freight Cars, Signature Press, 2004), but is intended to be the starting point for a model load.

Andrew also showed some quite impressive SP passenger cars, assembled from 3-D printed parts. I will devote a forthcoming post to more information about those cars.

These kinds of models are an excellent example of what may well be the future of the hobby: the ability to make 3-D printed versions of almost anything we may need for a particular prototype. I look forward to the emergence of these capabilities on a broader scale.

As almost always is the case, attending a railroad historical society convention like this one is immensely interesting and informative, a major part of the fun. If you’ve never attended the conventions put on by the society for your favorite railroad, I’d urge you to give it a try. I am certain you would enjoy it.