My first post on this topic provided some general background on the SP maintenance car fleet, as well as showing two car types, a roadway box car and a water tank car. The post can be viewed at the following link: http://modelingthesp.blogspot.com/2013/03/modeling-some-sp-mow-cars.html .
In that post, I also showed a page from SP’s own roster of MW cars. That roster does raise a question: what are the definitions for “roadway” or “boarding” or other types of cars? No SP document defining these has come to light. But here are the definitions suggested by Ken Harrison, who is working with the SP records on the maintenance car fleet. This is not exhaustive; there are other car type names in the SP roster.

“ROADWAY...cars that may be moved from place to place either in ordinary extra freight trains or in work extras, often to move MW equipment (including Burro cranes) and supplies from one place to another, available for general MW service.
BOARDING...cars, converted from either passenger or (more often) box cars, to provide accommodations for MW crews, including but not limited to sleeping, dining, cooking, shower, or other domestic use.
MISC. (Box, flat, etc.)...cars that are used for non-roadway use or unusual assignments, such as ice service, Lidgerwood unloaders, tower cars (for electric operations), rubbish service, etc., or which have no specific assignment. This often includes cars used for such purposes as tool storage.
SUPPLY...cars often assigned to the Stores Department and used in divisional supply trains, or to receive and distribute supplies to supply depots and commissaries.”

My second post about SPMW cars expanded the car coverage by showing a roadway flat car, and an ice service car. That post is available at: http://modelingthesp.blogspot.com/2013/04/modeling-some-sp-mow-cars-part-2.html .

This third post is to address car conversions. These vary considerably, but many involve adding windows and sometimes doors to existing box or other cars. Among boarding cars, the logical ones for me would be either a kitchen-dining car (added doors as well as windows), a bunk car (several windows), or a tool car (often only one or two windows per side), based on photographs. Here is but a single example, a box car of Class B-50-6 converted to a bunk car in December 1942. The photo is by John Lawson in 1951, from Wilbur C. Whittaker’s collection. Note the simple lettering and the “Danger” warnings next to the side door (click to enlarge). 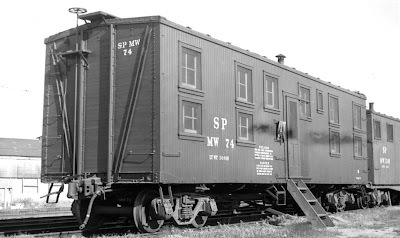 I plan to attempt a car like this, using an appropriate car kit but simply throwing away the car sides, and using scribed styrene with all the window and doors added. This is probably simpler than removing the old side details, especially since the sides of a resin kit would be pretty thick for cutting of holes for windows.
But back to the present project. An interesting variation of such conversions is the use of old passenger cars in various kinds of MW service. These ranged from ancient wood cars of all types, to more modern steel coaches and diners. Photographs of these are not plentiful. I have chosen to do a kitchen-dining car converted from a wood baggage car. For a starting point, I used the Model Die Casting old-time 50-foot “baggage car.” MDC chose to describe this as a baggage car, but the window arrangement is far closer to a postal car than a baggage car; you can see this is Volume 3 of the series, Southern Pacific Passenger Cars (SPH&TS, 2007).

The kit paint and lettering that you see in this photo was stripped before modifying the body, to ensure that nothing of the old lettering would show through the new paint.
It was common in such conversions to blank one or both baggage doors, and often to insert a person-size door into that location, for side access. Windows were often blanked off or added, as needed for the interior arrangement in the car. For blanking purposes, I used Evergreen styrene sheet, No. 2037D, the HO scale car siding with 3.25-inch board spacing, 0.020-inches thick. This does not exactly match the board spacing on the MDC car body, but is similar enough to look all right.
For the person-door and windows, I used, respectively, Grandt Lines parts 5131 (Door with Frame, Tongue and Groove Panels) and 5112 (Attic Window, Rectangular, 6 Light). Holes for these were cut into the blanking sheets by the same process I used in my styrene Shumala depot, described in an article for Model Railroad Hobbyist last November. [As with any issue of MRH, you can download it for free from their web site, at: http://model-railroad-hobbyist.com/magazine/mrh-2012-11-nov .] Here is one side of the car with the added person door (black) at right, a blanked window, and blanked baggage door at left with an Attic Window (the other side is different and will be shown below).

On the car’s roof, I installed the centerline vents provided in the kit, and at the kitchen end, added more vents and an exhaust stack (Walthers 941-847). These are white metal parts, from a stash of old Walthers passenger car parts. I glued in place the kit’s green acetate clerestory glazing, and painted over a number of the individual panes to suggest that glass had been replaced with something else. I also added a smoke jack for a stove above the dining area, using a passenger car steam trap (Alexander part 1701). I also brush-painted some Grimy Black patches on the roof to indicate repaired leaks.
I added handrails alongside each side door in the finished car, and also added caboose-style curved handrails at car corners, as often seen on MW-converted passenger cars which retained end platforms. These are available commercially from Detail Associates, their part no. 6503, and the corresponding L-shaped handrails on the car ends are their part no. 6504. I made a drilling template from a small square of styrene sheet to speed up this job (both kinds of handrails fit the same template!).
Next I worked on the underframe. I installed all the MDC kit parts essentially where indicated, but added brake rodding where it was visible. I mounted Kadee coupler boxes with 2-56 screws, under the end platforms, using long-shank No. 156 whisker couplers. The end railings provided by MDC lack the center stanchion common on SP railings of this type, so I added those with 0.019-inch brass wire.
To show the handrail and end platform appearance I was attempting to create, here is a photo from March 1954 at Lordsburg, NM (photo by Chet McCoid, Bob’s Photo collection, used with permission), of a kitchen-diner assigned to the relief (wreck) outfit at Lordsburg. That’s why the car has the name “Relief Tender,” used on all cars in a relief train other than the crane, and all bear the crane’s number (here, 7035), followed by a letter. My car, however, is not a relief outfit car, and I didn’t try to model the window screens on this car!

The modeling work was completed with the addition of A-Line steps under the doors on each side, and then I could airbrush the model with boxcar red. The trucks in the photo below are surplus parts, what I call “spray booth trucks,” since they are only used to hold up car bodies which are being airbrushed. (This is the “other side” of the car.)

My next step naturally was lettering. Here again, I used Microscale set no. 87-155 and positioned the lettering similarly to the two SP prototype photos above: the initials and number toward the left end, the “danger” warning nearby (compare SPMW 74). There are photos of SPMW cars with no danger warning, with warnings in English only, and with one warning each in English and Spanish. The Microscale 87-155 set does provide these warnings, though the current set misspells the Spanish word for danger (should be “peligro” but they have “pelegro” – the old set was correct!), and the lettering is too large.
The car number I chose was SPMW 1081, a kitchen-dining car converted from wood baggage car 6304 in 1929. This information is from the SPH&TS roster book, described in my previous post about modeling MW cars, which is at: http://modelingthesp.blogspot.com/2013/04/modeling-some-sp-mow-cars-part-2.html .
With an overspray of Testor’s Dullcote to protect the decals, I was ready to proceed with my usual acrylic-wash method of weathering. After weathering, I added another Dullcote overspray, and added window glazing. Here is the completed car on the “company track” at Ballard on my layout, where MW equipment is often spotted. 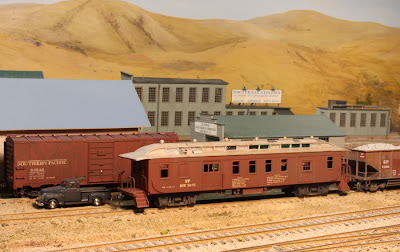 This was an interesting project, and brings me close to completing the SP work equipment cars I want to have on my layout. I still need a bunk car and perhaps a tool car to complete my work string, so those may be the subjects of future posts.
Tony Thompson
Posted by Tony Thompson at 11:25 AM