I have long been interested in the idea of “signature” freight cars for particular railroads. To me, the term “signature” in this context means something which is both distinctive and also characteristic of its owning railroad. An example would be the Pennsylvania Railroad’s X29 box car. This is essentially the proposed ARA 1923 all-steel box car, and other railroads also built cars to this design, such as B&O and CNJ. But the PRR built over 29,000 of them, and it is natural that they remain largely associated with that railroad. The quantity of cars here is not a detail. It isn’t just the car design, but the large population, which makes this particular car type say “Pennsy” in a loud voice.
I have alluded to this idea indirectly in previous posts. For example, in a discussion of model car fleets, I mentioned two signature New York Central cars, in this post: http://modelingthesp.blogspot.com/2013/02/keeping-model-car-fleet-under-control.html . Like the PRR, the New York Central had an enormous fleet of freight cars, and one could choose any number of distinctive and numerous cars from their fleets. I may expand on this point in future posts.
But a key point here, as mentioned, is the sheer number of cars. The larger railroad fleets will simply be more likely to appear in trains. This is the idea explored by Tim Gilbert and Dave Nelson, as I explained in a previous post (see: http://modelingthesp.blogspot.com/2010/12/choosing-model-car-fleet-2.html ). On that basis, one wants to look at car fleet sizes, and I showed, in the post just cited, a bar graph of the largest railroad fleets, adjusted in numbers by removing ore, hopper, and ballast cars, as those cars were proportionally far less evident in interchange traffic.
Having referred in this post so far to several rather large railroads, it may be interesting to consider a much smaller railroad, the Western Pacific. Greatly outnumbered by the car fleets of Western giants like Santa Fe, Southern Pacific, Union Pacific and Great Northern, nevertheless there were some distinctive WP freight cars, although with only 5000 total freight cars in 1953, this was really a minor player among Class I railroads generally. The WP received 2500 box cars in the 1920s, numbered 16000–18500, all to the same double-sheathed design with steel ends and a steel underframe. These cars continued to form a major part of the WP box car fleet for many years. My example was built from Sunshine resin kit 59.3 by Dennis Williams and lettered and weathered by me. 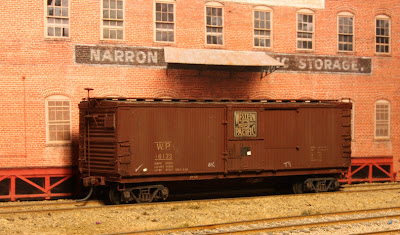 I prepared an entire column for Model Railroad Hobbyist about this topic, with a wide range of railroads represented, from B&O and Milwaukee Road, to GN, NP, and Mopac, and even smaller roads like the Boston & Maine. It is in the April 2013 issue of the magazine. As with all issues of MRH, you can download it for free from their website. The April issue is at  http://model-railroad-hobbyist.com/magazine/mrh-2013-04-apr .
Tony Thompson
Posted by Tony Thompson at 10:36 AM