Streets, roads, and all that, Part 3

My first two posts on this topic addressed street striping and road signs (first post, available at: http://modelingthesp.blogspot.com/2013/03/streets-roads-and-all-that.html ), and railroad crossing signs (in my second post; see: http://modelingthesp.blogspot.com/2013/03/streets-roads-and-all-that-part-2.html ).
In this post I want to show a couple of additional items. First, Gene Deimling was kind enough to send me an SP Common Standard drawing of the standard crossbuck when it was all wood (I previously showed a later drawing of one with aluminum instead of wood boards). As shown in its upper right corner, it is a CS 13 drawing (CS = Common Standard). This is the original 1904 version, or close to it, and the legend, “Look Out for the Cars,” would be superseded by the words “Southern Pacific.” The one I showed previously was the 1970 drawing, numbered as CS 1320. 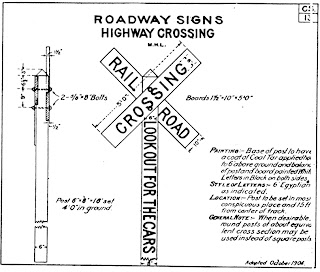 In this drawing, the crossed boards are 10 inches wide instead of the later 9 inches, and the post is 6 x 8 inches (the broad face to accommodate the lettering) instead of the later 6 x 6-inch post. But essentially all the specifics shown here also appear on the 1970 drawing, CS 1320, which I showed in the previous post.
I also wanted to show one of the earlier “railroad crossing warning” signs, in the style of times prior to the 1950s. These are available as Tichy part no. 8177. Tichy molds these on a rather slender styrene post, which I replace with a scale 6 x 6-inch styrene (or sometimes stripwood) post. In the photo below, the railroad crossing warning sign is at right. 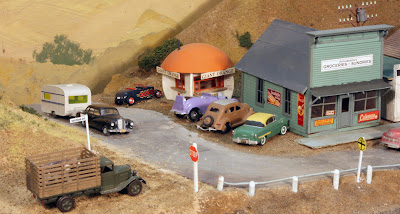 Note the street sign toward the left, indicating Railroad Ave. All cars have California license plates except the travelers with the trailer. (You can click on these images to enlarge them.)
I also added a directional warning sign at the base of the short uphill on Chamisal Road, as you see at right in this view. The street sign at the intersection, to the left of center in this image, is also visible. These are simply additional details, but they add to the overall impression. I still need to fix that sidewalk railing! 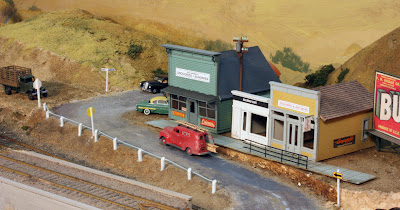 I continue to add street and road details as I get a chance, since I think they make the layout more realistic. For any region or era modeled, I believe that researching and implementing details like these are both interesting and fun.
Tony Thompson
Posted by Tony Thompson at 11:22 AM