My connection with Signature Press

Doubtless many people who read these posts are aware that I’m connected with the railroad history publisher, Signature Press. Actually, I’m a partner in that business, with Bob Church the other partner. He acts as business and advertising manager, I act as editor and supervise book design, layout and production. Here is some additional information, some of which can be seen on the “About Us” page on our web site at www.signaturepress.com.
Signature Press was formed in 1993, so this is our 20th year, and our efforts since 1993 have  been to publish high-quality railroad history books. The Press is to some extent a successor and enlargement of Central Valley Railroad Publications, and has acquired rights to more than fifty former titles of Howell-North, Darwin and Superior railroad books. Both re-issues and revisions of some of those former titles have been published, as well as new books from a variety of authors. Both partners have a particular interest in the history of the Southern Pacific Railroad, but our list of titles, as we intended, ranges over many railroads and across the country. Some of our new book projects are described on the web site under “Forthcoming Books.”
Our first book was John Signor’s Southern Pacific's Coast Line, published in 1995. Since then, we have issued two to four books per year, mostly new titles but an occasional reprint. The intent with previously published books is to reprint those which retain adequate market interest and value. Each reprint has been improved, expanded, or corrected as needed, often requiring a new edition.
Quality books are the key part of our goals. This means not only excellent production values in layout, printing and reproduction of photographs, but excellent historical accuracy and value as well. The same standard is applied to reissued books as to new books. Altogether, we have published 43 titles as of April 2013, with half a dozen or so now out of print.
Signature Press is proud to be a member of the Independent Book Publishers Association or IBPA (formerly Publishers Marketing Association or PMA). For information about IBPA, you may visit www.pma-online.org.
Here is a photo of the partners, Bob Church and me (shown above in the back row at right and left, respectively, with our order person and customer contact, Kim Stein, center front). Also in front are Bob’s wife Jeanne at left, and my wife Mary at right. This snapshot was taken at our book sales table at the SPH&TS convention in Ventura, California in 2012. 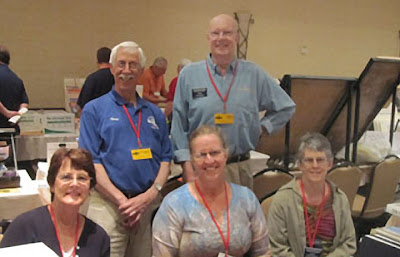 The web site at www.signaturepress.com contains the complete catalog of books presently in print, and secure individual orders can be placed there electronically. Orders can also be placed by mail to 11508 Green Road, Wilton, CA 95693, by fax to (916) 939-1960, or via toll-free telephone at (800) 305-7942.
Bob and I have enjoyed playing a role in bringing to life (or back to life) the works of distinguished authors like John Signor, Jack Burgess, Richard Steinheimer, Ed Kaminski, David Myrick, Harre Demoro, and others, as well as publishing a few books by the two of us. Yes, in many ways it’s simply work, but in other ways it can be fun, and it’s always satisfying.
Tony Thompson
Posted by Tony Thompson at 11:37 AM