In my first post about this topic, I described some general background on SP maintenance cars, including the SPH&TS roster book, and showed models of two types, both essentially unaltered from their appearance when they were in revenue service, a “roadway box” car and a water tank car. That post is available at: http://modelingthesp.blogspot.com/2013/03/modeling-some-sp-mow-cars.html .
The SP Society roster book, now available after being out of print for a few years, is well worth its cover price. It includes passenger and freight equipment, as well as the maintenance of way equipment which is the topic of the present post. Just for reference, here is the cover of the present, spiral-bound, version. 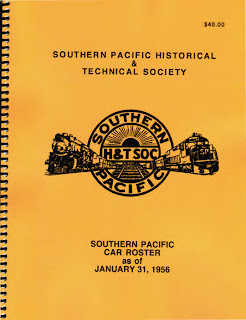 In this post I want to add two more car types to my previous description. One is the “roadway flat,” usually an unaltered flat car, used to carry materials, equipment, and supplies of all kinds. One group of such flat cars were the Harriman flat cars of classes F-50-1, -2 and -3, which were very nearly extinct in revenue service by my modeling year of 1953. Another group was the truss-rod flat cars built by SP during World War I, classes F-40-6 and F-50-7. Those two classes differed visibly only in the former having 12 stake pockets, the latter 13 stake pockets.
Here is a photo of one such car, SPMW 810, a former F-50-7. It was photographed at Calexico, CA by Chet McCoid in 1955 (Bob’s Photo collection, used with permission). Note that the deck is flush, not extending out to the outer edge of the stake pockets. Flush decks were unusual among SP’s conventional flat car classes of the period. This car was originally SP 42470, and was assigned to MW service on August 28, 1951.


You may be able to see that it has six truss rods. Like most SPMW cars, it has little or no capacity or dimensional data lettered on the sides, although the old data from its revenue service days can still be seen.
To model such a car, I fumbled around in my stash of old kits and came up with an Ulrich truss-rod flat car, with adequate looking straight side sills, flush deck, and 12 stake pockets. Here is my model, lettered with Microscale set 87-155: 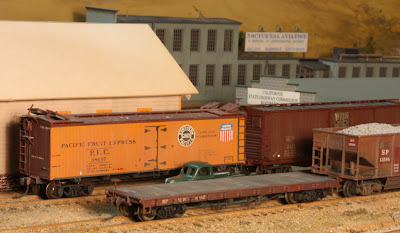 The car has four instead of six truss rods, but this is not very obvious. In this photo, the car is coupled to an SP ballast car, but those cars were not “officially” work cars, and had revenue-service car numbers.
Another SP maintenance car type was the refrigerator car, mostly in the form of old PFE cars but some of them were cars inherited from the EP&SW. The primary use of these was to move ice to depots at which passenger cars with ice-activated air conditioning had to be re-iced, or diners supplied with ice for their ice boxes. But ice was also supplied to those living in section houses, depots, and the homes of section foremen, signal foremen, and others. Here is a photo of one in passenger depot ice service, from Sheldon King’s collection: 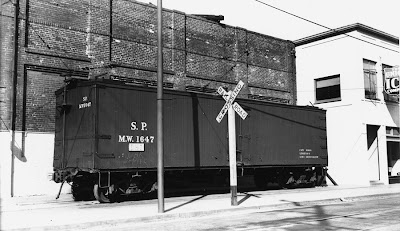 This car was photographed at Union Ice Company in Oakland, CA, and was assigned to move ice to the passenger car icing facility at Oakland Pier, popularly called “The Mole.” Chalked under the white placard is “OAK PIER.” The car is a former PFE Class R-30-13 car.
Here again, I saw this car type as an opportunity to build one of the fine kits on the market for cars too old for revenue service. I chose a Westerfield kit for a Harriman PFE car, Class R-30-2, ten of which were sold to the SP in the 1930s.  (I used kit No. 1802, but which 1800-series kit doesn’t matter, as it will end up boxcar red.) Some such cars in SP service did receive yellow paint on the car sides, but many, like the one shown above, were simply painted boxcar red all over. My model is lettered for ice service, which was correct for some of these cars. 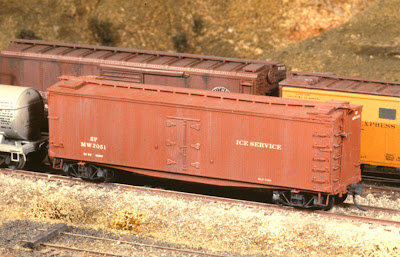 This car is used on my layout to move ice to the storage building of the ice deck at Shumala. From SP records, I know this car was scrapped in early 1954, and another car received this same number, SPMW 2051, but on my layout, those events are still in the future.
This post is far from exhausting the topic of modeling SPMW cars, and I expect I will put together at least one more post on this topic.
Tony Thompson
Posted by Tony Thompson at 9:44 PM