I wrote previously on chalkmarks, along with route cards, as minor parts of freight car detailing. You can read that discussion in my post at this link: http://modelingthesp.blogspot.com/2011/11/chalk-marks-and-route-cards.html . That post includes a prototype photo of a car clerk writing on the side of a freight car with “railroad chalk,” as it was and is termed, a one-inch diameter stick of chalk.
My purpose here is to go a little further with this topic, both for the prototype and the model. I was inspired by R.L. Kennedy’s explication of some of the chalk marks he was familiar with in Canada, which you can see at this link: http://www.trainweb.org/oldtimetrains/CPR/general/chalk_it_up.htm . In particular, he indicates the various numbers used to indicate car destinations.
On the model side, I have been asked about technique as well as content for chalk marks. Kennedy’s piece, cited above, gives a good set of examples of the meaning of chalk marks. Many others are obvious: “MT” for an empty car; “NY” or “LA” or “CHI” for New York, Los Angeles or Chicago; “OK” to mean just that; “LD” meaning “load this car;” and “BO” for a bad-order car. Often older marks were crossed out or partially wiped off, but often they were simply left in place if they did not conflict with new ones being added.
I have mentioned previously (in the post cited in the first paragraph, above) that Clover House makes excellent dry-transfer sets of chalk marks taken from actual freight car photographs, and are thus entirely authentic, if often mysterious in meaning. They can also be created with a very sharp white artist’s pencil, for which I have found the Prismacolor brand most satisfactory. Then, of course, one can create any desired marks.
Without attempting to be comprehensive, I thought it might be interesting to show some examples of the model chalk marks I have in my fleet. I do not add these marks to every freight car, nor do I add more than a couple to most cars, which is in accord with how I perceive prototype photos of freight cars in the 1940s and 1950s. Only an occasional car receives numerous marks.
I will start with the Seaboard box car which was described in a previous post (see: http://modelingthesp.blogspot.com/2012/12/small-modeling-project-1932-ara-box-car.html ). It has a mixture of Clover House dry transfer marks, and Prismacolor pencil marks. Incidentally, note that the SP tank car at left has a chalk mark too, though many modelers seem to think that tank cars didn’t carry these. And notice the crossed-out mark above the left truck of the box car, something commonly seen in prototype photos; it’s from the Clover House set. You can click on these photos to enlarge them.

Another group of cars, photographed at Ballard on my layout, shows somewhat different marks. The Illinois Central car was mostly lettered by John Golden, who sold the car to me, and he has used some complex chalk marks. (Note also that the car is now renumbered into the postwar 16000–16975 series, something I mentioned I would do, in my column in Model Railroad Hobbyist for April 2013).

Lastly, here are two more box cars at Shumala, with a variety of Prismacolor and Clover House chalk marks. 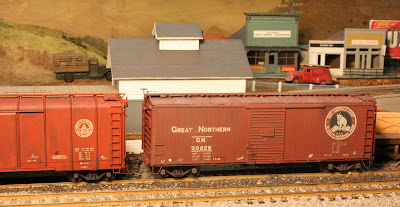 Note also in all the model photos that most cars have route cards as well as chalk marks, something discussed in the prior blog post cited at the very beginning of this post.
I like adding chalk marks to models, both because it is a very noticeable feature of prototype freight cars in the transition era, and because it’s easy and fun to do. If you haven’t tried this yet, I urge you to experiment with it.
Tony Thompson
Posted by Tony Thompson at 11:49 AM