I began this thread with some background on why I am choosing to upgrade a few old Athearn steel reefers as PFE cars; you can view it at this link: http://modelingthesp.blogspot.com/2012/08/ujpgrading-old-models-athearn-reefers.html . The real point is that I want to have a car from each of two 1000-car classes, PFE classes R-40-14 and R-40-20, built respectively in 1941 and 1945. The Athearn car sides and roof are close to correct for these classes, so the project primarily requires new car ends, along with further re-detailing to upgrade the Athearn body. As the original ends are among the shortcomings of the Athearn steel reefer, replacing them is a positive step. In the previous post, just cited, I showed the replacement of my old Northeastern “drop” grab irons with Westerfield straight grab irons, and addition of correct placard boards, following by a gray airbrushed primer coat.
I also needed to replace the rather thick Athearn sill steps. I used A-Line metal steps for this, and again employed my “filler block” technique, with small lengths of scale 4 x 4-inch styrene blocks, as I showed in a previous post (you can see it at: http://modelingthesp.blogspot.com/2011/12/modeling-project-m-box-car.html ).

Since the R-40-14 and -20 cars had center steps exactly like the corner steps, the A-Line parts were used for all three steps on each car side. Some overspray of the gray primer can be seen on the underbody. You can probably also see the new wire grabs.
Meanwhile, the ends were cut from the Athearn roof-end part, since ends were to be replaced. This is a simple job and results in a clean, freestanding roof. Note here that I had earlier modified the Athearn ice hatches by cutting down their gross hinges and removing the oversize latch bars. Here one hatch is removed. I have already installed a Plano etched metal running board; all the classes I am modeling were built with this type of running board.

The previous post in this thread (cited at the very top of this post) showed a close-up of the ice hatch area of this same roof, so you can go to that post for more detail if you wish.

The next step was to airbrush the sides Daylight Orange. As explained in the PFE book (Pacific Fruit Express, by Thompson, Church and Jones, 2nd edition, Signature Press, 2000), this color was chosen by PFE in 1929 for refrigerator car sides, long before the color scheme for the Daylight train was even a gleam in the eyes of SP passenger train planners. But the more famous Daylight train naturally lends its name to the paint color.
A genuine advantage of the Athearn reefer body design is that the separate sides are easy to paint a different color, no masking required. Here are the two car bodies with their Floquil Daylight Orange paint. The overspray onto the underbody will be touched up later. 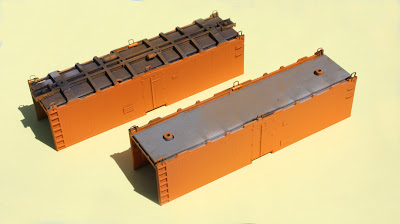 With this paint dry, and a coat of gloss for decaling, the cars can be lettered. And the roofs (with ends removed) can be reassembled to the bodies, leaving only the new ends to attach. But I’ll show that in the next installment.
Tony Thompson