Streets, roads, and all that, Part 2

In my first post about various aspects of streets and roads (see: http://modelingthesp.blogspot.com/2013/03/streets-roads-and-all-that.html ), I described some signage and my approach to center lines, all to improve the realism of roads on the layout. In this second post, I take up some associated topics.

Grade crossings. A roadway subject which can get complicated is that of grade crossing warnings. Here again, there are state and federal highway standards, which are in fact quite informative. A useful web version of these is: http://safety.fhwa.dot.gov/xings/com_roaduser/07010/sec04a.htm . [You need to scroll about halfway down the document to get to the meat.] Some of these standards would not apply to 1953, but the basic ones certainly do. It should be noted that the railroad, not the local road authority, was responsible for providing, erecting, and maintaining crossbucks.
To sum up briefly, crossbucks are to be placed essentially “at” the crossing (warning you to slow down, look, and listen), with an added sign for multiple tracks. The SP drawing (see below for reference) directs use of 6 x 6-inch timber posts, 15 feet long, set four feet in the ground, location to be 15 feet from centerline of track. Lettering is 6-inch Egyptian. Like many railroads, SP placed the two crossed boards on opposite sides of the post. In addition, there were railroads which did not place the crossbuck boards at 90 degrees to each other, but SP did.
Shown below is a portion of Southern Pacific Common Standard 1320 (formerly CS 13), a drawing created in 1904 and updated to 1970, by which time the signboards themselves had become aluminum plate. In 1953, these were all wood. The drawing can be found in Southern Pacific Lines Common Standard Plans, Volume II (Steam Age Equipment Co., Dunsmuir, CA, 1993), page 8. You may click on the drawing to enlarge. 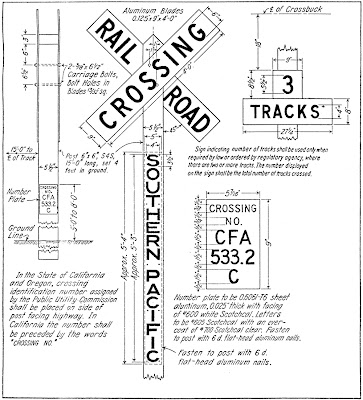 I have put the full drawing on Google Drive, which you can access (and download and print, if you wish). It is available at the following link: https://docs.google.com/file/d/0Bz_ctrHrDz4wenJwS0ViMHJrZjQ/edit?usp=sharing .
I have used both styrene and metal (NJ International) crossbucks in HO scale. Recently Microscale has produced a decal set (No. 87-1376) with the vertical lettering “Southern Pacific,” which SP placed on some posts of crossbucks, as the drawing above indicates. Note also the black tar preservative at post bottom, to be used on all white posts, to 6 inches above ground. 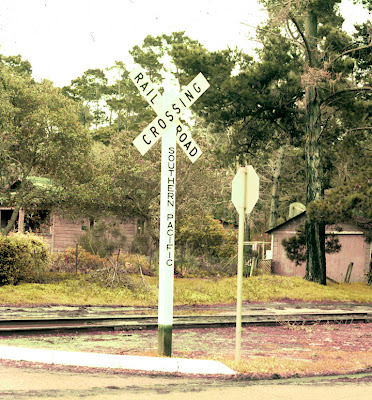 I took the photo above near Monterey, CA in January 1980. Now, 1980 is long after my 1953 modeling date, but the same appearance is appropriate for my era, as is shown by this 1953 image at San Luis Obispo, a detail of a photo taken by Richard Steinheimer, from the DeGolyer Library (used with permission). Note the 1953 license plates on cars. Also notice the round sign at far right.

The San Luis Obispo signs (the one on the far side of the tracks is also visible at left), protecting the crossing at Osos Street, do not have the vertical lettering. In the full CS 1320 drawing, SP specified that this lettering was only to be used at major highways or in large incorporated cities, neither of which will apply in most places on my layout.
A closely related sign is the required round, yellow “advance warning” sign (I showed an example of the current version in the previous post on this topic: http://modelingthesp.blogspot.com/2013/03/streets-roads-and-all-that.html ), normally not less than 100 feet from the crossing, but other locations can be used when sight lines are restricted or physical conditions at the crossing would prevent that length of warning distance. These are the responsibility of the local road authority, not the railroad.
Today’s warning sign has diagonal lines with “R R” on either side. In 1953, this arrangement was in the process of superseding an older style with vertical and horizontal lines, and “R R” at the top—see the San Luis Obispo view above. Here is the one I have on Chamisal Road, at lower right (the photo is from my old layout, and the bridge has girders which are too deep and are being replaced), for a track just beyond the underpass. 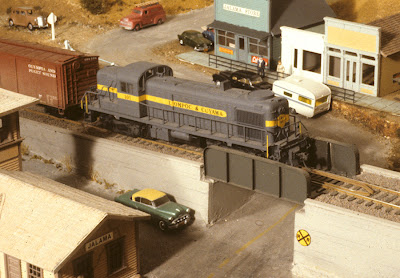 The older style sign is offered in HO by Tichy, their part number TIC 8177.
License plates. Roads, of course, are used by motor vehicles, and I have posted previously about my approach to vehicle license plates which are correct for the era modeled (California in 1953). There were two posts about this, and they contain considerably more detail than I can re-visit here. They can be viewed at the following links. I covered automobile license plates at: http://modelingthesp.blogspot.com/2012/11/vehicle-license-plates-in-ho-scale.html , and then described California licenses for highway trucks, in this post: http://modelingthesp.blogspot.com/2012/12/vehicle-license-plates-trucks.html .
These various street-related topics strike me as part of the fun of researching the era one models, and of course getting the right appearance helps set the stage on which you depict your era.
Tony Thompson
Posted by Tony Thompson at 9:51 AM