Yesterday, March 9, was the date of this year’s Winterail “Railroad Photography Exposition,” held once again in Stockton, California. The site was the Scottish Rite Masonic Center in Stockton. I won’t offer a general description of Winterail, as I have posted that last year (you can see that post at: http://modelingthesp.blogspot.com/2012/03/winterail.html ). But this was a little different, as it was the 35th consecutive year of Winterail, and there were many comments and back-pats on that score. There was even a modified version of the traditional emblem, on the program and on T-shirts:

But most of the meeting was what it traditionally always is: a morning railroadiana show and sales event, and afternoon and evening photo presentations, which for many years have been utterly impressive and professional. The doors open at 9 AM, and there is always a line-up of the “early birds” waiting for admission, seen here across the patio between the two wings of the building. 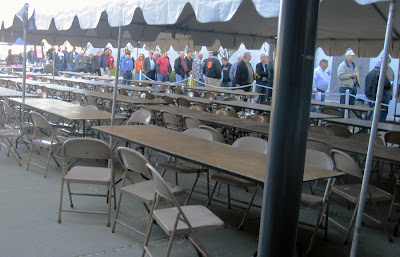 Once inside, everyone heads for the display rooms, and there is everything from books, photos and timetables to clothing, railroad china and other artifacts, sometimes very large ones like semaphore signals. Much of the circulating crowd in the rooms is greeting friends and chatting, so this is often the core of the social side of Winterail, along with shopping and purchasing that special item. 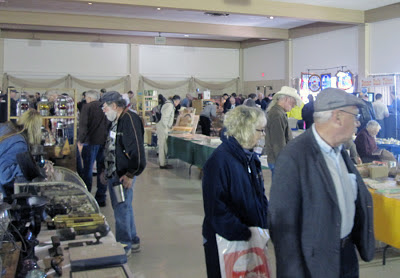 There is a food concession, offering barbeque and other things off the grill, and many attendees take coffee breaks and lunch in the patio. The patio was pleasantly sunny as it usually is, though this year the air was fairly cool. 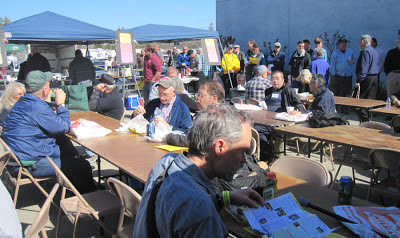 The Stockton Masonic Center includes a large auditorium, holding about a thousand people, and most years it is pretty full for the photo show. Here is a view of the crowd, taken from the floor down in front. 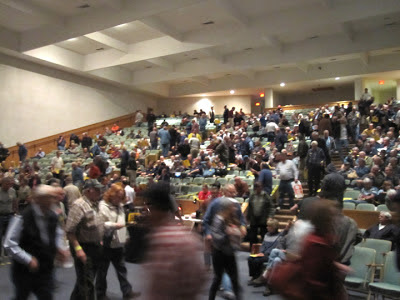 The auditorium is fairly steeply sloped, and provides a good view from every seat, as is evident in this view from partway up the far right-hand aisle. The screen is properly large and entirely appropriate for the photo presentations. There is a two-hour break for dinner. For many years a sizable group went to a sort of steak house called The Shadows, but it has now gone out of business. This year eight of us repaired to a pleasant brew pub named Valley Brew, and enjoyed a good meal. Here is Ray deBlieck (left) apparently struggling to count the money, while Ed Slintak at right checks Ray’s calculation of the bill. That’s Eric Dervinis at far right. 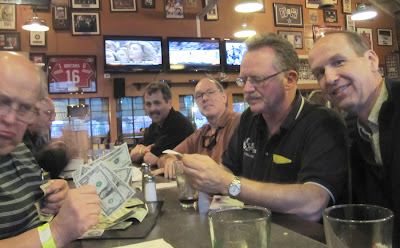 All in all, a fine day of railroad topics, information and friends, as is entirely usual with Winterail.
Tony Thompson
Posted by Tony Thompson at 1:33 PM