My first post about layout fascia described my approach to this feature, using tempered Masonite in its natural color. You can read that discussion at: http://modelingthesp.blogspot.com/2013/02/layout-fascia-my-approach.html . In this post I want to address signage.
This is an important point about layout fascia appearance, though only adopted by some modelers, and is something I myself learned from C.J. Riley. (This point is made in his forthcoming book, The Art of Illusion, which describes ways to create the illusion that we model real places.) On the prototype, almost every location has a name, and this can be conveyed on the fascia with small nameplates. This would apply to things which intersect the plane of the fascia, like creeks, roads or other features, as well as railroad crossings. Town names are also useful to display, as are directions such as East and West, because visitors usually do not have a clear understanding of the layout orientation or locations.

Before describing the signs themselves, let me say a few words about choices of place names on a layout set in an entirely real geographic area but not modeling actual towns. It seems to me the names chosen ought to be consistent with the history and character of the area, as evident from existing place names and other sources.
For my own signs, I began with maps, first a detailed road map of the area, a Rand McNally county map for San Luis Obispo County. To that I added the two USGS quadrangles which cover the area modeled, the Oceano and Guadalupe (California) quadrangles from the 7.5-minute topographic series. These different maps complement each other, because the road map shows all street names in built-up areas, which the quadrangles do not, but the topo maps are very thorough about names of geographic features such as creeks, valleys and hills.
Because I like to understand where words come from, when I can, I studied the area place names extensively in a great reference book for Californians, California Place Names, 3rd Edition, by Edwin Gudde (University of California Press, Berkeley and Los Angeles, 1969). I will refer further to this below. Now let’s turn to the signs themselves.
I chose a typeface for these signs which I thought had a lively character without being ornate or eye-catching. The face is called Hamilton. [I will digress briefly about the typeface – if not interested, skip to the next paragraph.] Hamilton was named for William Hamilton Page (1829–1906), a self-taught designer of wood types, who patented this face in 1887. Although Page called it “#508,” when it was digitized by Font Bureau in 1993, they called it Hamilton in his honor. In 1891, Page sold his company to the Hamilton Company (no relation) of Wisconsin. Many original Hamilton wood types are preserved at the Hamilton Wood Type & Printing Museum in Two Rivers, Wisconsin. Though they are currently in the process of moving to a new location, if you’re interested you can find out more about them at their web site: http://woodtype.org/ .
I experimented with type sizes to find a fascia sign size I liked. There is of course no universal answer on this point; the lettering size I chose is about 3/16-inch (4 mm) high. The lettering then needs to be placed on a standard width of these nameplates. To harmonize with the type size, I have chosen 3/8-inch wide, with length to suit the name.
I have printed out the nameplates on glossy cardstock, using a laser printer. They can then receive a coat of Dullcoat or other lacquer to protect them. I usually attach them with a water-base glue, such as white glue or model airplane canopy glue, because if they need to be removed, they can simply be wetted and left until the glue softens.
Here is a photo of two of them, as applied. I chose to position the bottom of each label 1.25 inches below the top of the fascia. I have taped a steel straightedge at that distance to make placement of the signs easy (and level). This view pretty much looks right up Nipomo Street. The depressed location of the creek bed is naturally reflected in a cut-out in the fascia profile. The fascia here is a narrow strip of tempered Masonite. 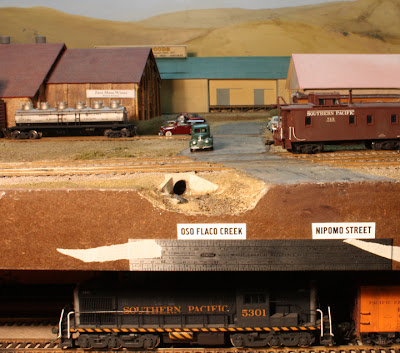 What you see below the fascia is the staging table, which I have described previously. For a link to part of my description of this feature, see: http://modelingthesp.blogspot.com/2011/02/staging-trackage-installation-4.html .
Oso Flaco Creek, shown above, is a real creek in the area modeled, and has a number of upstream branches. The name in Spanish means “skinny bear,” and the name was applied by the soldiers of the Portolá expedition, who camped in this area in September 1769, and who killed such a bear near their camp. Nipomo Street is named for the nearby town of Nipomo, a Chumash Indian place name for one of their villages. Oddly, the present town of Nipomo has no street by that name. I could hardly resist the fact that there is a Thompson Avenue in Nipomo, but it is some ways from the railroad location and in any event is a north-south road.
At Shumala, a road runs right past the depot and under the bridge which carries the branch line inland. Its name is Chamisal Road. 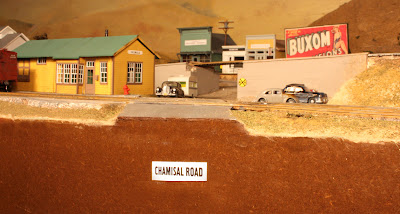 The name refers to the original Spanish land grant in this area, Rancho Bolsa Chamisal, with the word “bolsa” for the land areas which are largely surrounded by swamps or water. The word “chamisal” in pre-American days simply meant chaparral. Like the other research findings, this one is really applicable only on my layout, but I wanted to illustrate the process of arriving at these names.
Finally, I mentioned including town names and directional information in my introduction to this post. I am not yet completely satisfied with my design for this type of sign, but here is the current iteration. 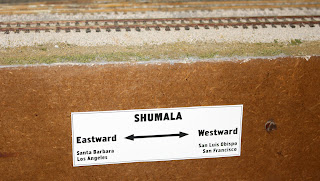 These examples could be multiplied, but I hope the point is made. Labeling features that reach the fascia, like water courses and roads, along with town names, helps visitors know where they are. And if you do not model an exact location, research via maps and books can tell you what kind of names you should choose.
Tony Thompson
Posted by Tony Thompson at 10:45 AM

Email ThisBlogThis!Share to TwitterShare to FacebookShare to Pinterest
Labels: My layout, Standards, Typography