All railroads maintained a fleet of cars used in various non-revenue work, from wreck trains and shop cars, to work trains and supply trains. Most of these were simply older cars removed from revenue service, and modified when necessary for their new duties. Others might be bought new, such as wreck cranes, or used unmodified, as in the case of box cars used for trackwork supplies or the like.
For many railroads, this “shadow fleet” of cars remains undocumented, with only occasional photographs providing evidence of what once was. For other roads, including the Southern Pacific, extensive records do exist of car conversions, car uses, and appearance. Those records include extensive car ledgers and car cards at the California State Railroad Museum (CSRM) in Sacramento.
Some readers of this blog may already know that Ken Harrison has been at work for some years, collecting information on SP’s maintenance fleet, including close examination of the records at CSRM, and hopes to eventually create a book from the material. In the meantime, however, we can work with other, readily available sources.
The Southern Pacific Historical & Technical Society in past years sold a Xeroxed copy of 1956 rosters for freight, passenger, and maintenance rolling stock (entitled “Southern Pacific Car Roster as of January 31, 1956”). It was more than 300 pages, plastic-bound, and not terribly expensive. It is the maintenance part of that car roster that I refer to in this post.
Although the Society has not stocked this book over the last few years, they have just reprinted a few copies this month. Try the on-line store within the SPH&TS web site, at http://www.sphtsstore.org/servlet/the-92/Southern-Pacific-Car-Roster/Detail , to see if it is in stock. If not, you might wish to email your interest to the Society at: sphts@sphts.org.
I show below a sample page from this document, to illustrate how informative and helpful it is. Note that this is page 44 of the maintenance roster; that roster alone (less than a third of the entire SPH&TS book) has 99 pages altogether. 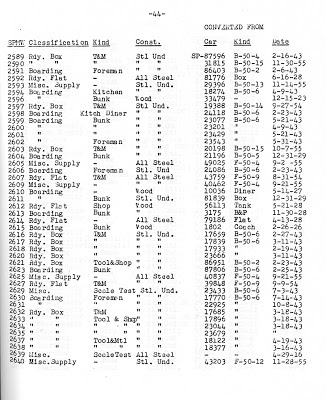 With this roster as a starting point, I have pursued creating a few reasonably accurate cars for my own fleet. The most obvious candidates for simple modeling projects are those cars which were not visibly modified. Among these are what SP called “roadway box” and “roadway flat” cars. These were used in their original configuration for simple carrying of materials and equipment.
For example, by the time I model, 1953, the Harriman box cars of classes B-50-1, -2 and -4 were gone from revenue service, but there is a fine Westerfield kit, No. 1751, for this car (and this can be an excuse to build some of the nice kits out there for older cars!). All I needed to do was to search through the SPH&TS roster book for roadway-service cars formerly of this class, and choose a number. You can see in the page shown above that such a car is present, SPMW 2621, a former Class B-50-2 car which had been converted to MOW service on February 23, 1943. 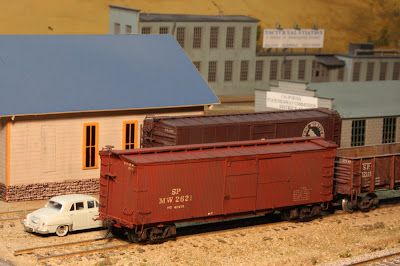 The simplified lettering is typical of SPMW equipment. I used pieces of Microscale set 87-155, including the “Danger” lettering at right.
Here is a prototype photo of a similar Harriman box car in MW service (though this one has a side ladder and an end door). The photo is from the Arnold Menke collection, location and photographer unknown. Note that the only item of capacity or dimensional data is the light weight. The SPH&TS roster shows that this is a former B-50-2 car, number 89084, converted on December 30, 1944. 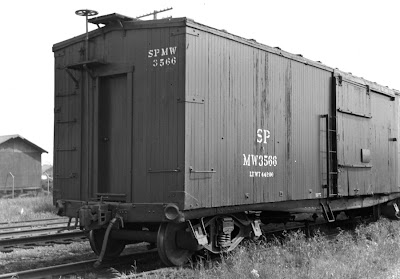 Another common car in work trains is a tank car for domestic water. SP used lots of its old tank cars this way, particularly the very durable steel cars of classes CS-25A, O-50-1 and O-50-2. As it happens, Westside imported a very well done CS-25A tank car, which they advertised as a crude oil car and labeled on the box as “tank car 1905,” an imaginary name; these cars were actually built in 1903. Moreover, they were neither built exclusively for nor at all limited to crude oil transportation. Here is a photo of one in work service in the 1950s, from the Steve Peery collection. 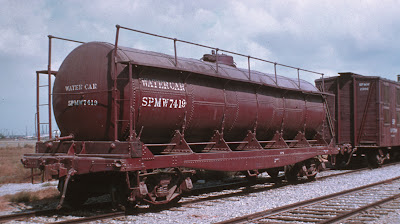 My Westside model was lettered from the same Microscale set mentioned above, 87-155. Most MW water cars were in the low 7400-series numbers (and are included in the SPH&TS roster book). The lettering was either in the first panel near the end, or the panel next to it. Here is how my model looks; it still has its diagonal hold-downs, which the prototype shown above did not. Prototype car SPMW 7424 was originally SP 51625, converted on April 9, 1936. 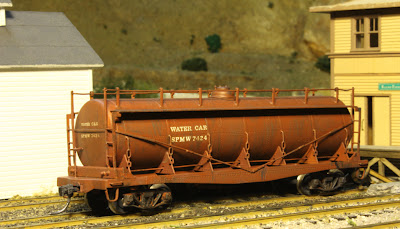 Incidentally, you can find much more information about both these tank cars, and cars like the Harriman box car shown above, in my volumes, Southern Pacific Freight Cars, Volume 4 on box cars, and Volume 5 on tank cars and hoppers. Both are from Signature Press, published in 2006 and 2008, respectively.
These two cars are a start on the subject of modeling SPMW equipment. I will put together a second post to cover more of them.
Tony Thompson
Posted by Tony Thompson at 3:38 PM