In previous posts about this layout extension, I described the construction of the simple benchwork atop a bookcase, including Homasote surfacing (see: http://modelingthesp.blogspot.com/2012/11/the-shumala-extension.html ), followed by describing the preparation of trackwork and some preliminary landform profiling (see: http://modelingthesp.blogspot.com/2013/01/the-shumala-extension-part-2.html ).
In this post I address the preparation of a backdrop for the extension. There was an existing piece of backdrop salvaged from my old layout in Pittsburgh, PA, which I believed could be curved and used to connect the existing Shumala backdrop to the extension (that was its role in the old layout). This is how the area looked at this point: 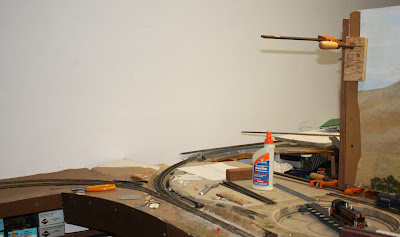 The clamps visible here are my adding some glue to the joint between the existing backdrop and its support post, prior to attaching the new section. The Shumala extension is at the left. In the right foreground you can see the turntable and what will be the roundhouse area. The mainline connection to my staging table curves rightward through the middle distance.
I knew I would need two pairs of hands to set the backdrop in place and get screws in place to hold it. My friend Ray deBlieck came over to lend those hands. Here I am installing the last drywall screws once we had it in place, with Ray at left. 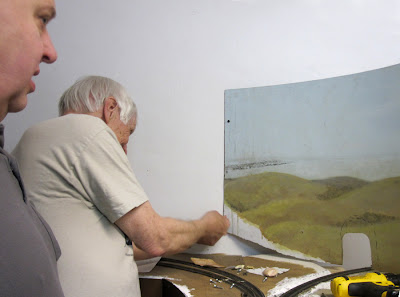 At the left edge, the backdrop does not quite come parallel to the wall, as is obvious in the photo above.
Although this backdrop segment was previously joined to the main Shumala backdrop, it did not fit perfectly, and the overlap, originally created with fiberglass mesh and drywall joint compound, stuck up. Here is the new segment in place, with the sticking-up joint obvious at right. But the continuity in the painted image is evident. Note also the new hole in the bottom of this backdrop, at ground level, to clear the mainline trackage, next to the portable drill.

That imperfect joint at the right was glued down and repaired with more drywall compound. At the left edge, where the backdrop is not quite tangent to the wall, some blending is necessary. Here the solution I used is the fiberglass mesh, sometimes called “wall repair tape,” which is sold for drywall joints and patches. I have used it before, and know that when embedded in drywall compound, it works very well to prevent cracking. Then it’s a matter of successive coats of drywall compound, sanding for smoothness between each (short description of a sometimes lengthy process). Here it is when that process was done. 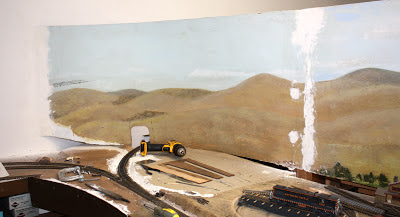 Next comes painting a coat of primer on the drywall compound areas.
I will show touching up the paint and the repainting the backdrop in a future post. I will also show how I handled the room corner to the left of the photos above.
Tony Thompson
Posted by Tony Thompson at 9:26 AM