When Heljan, the Danish model railroad manufacturer, released a whole group of Ford Museum models back in the 1980s, one especially caught my eye: a version of the original Ford Motor Company office building (kit 912). Here is a photo of how the model was supposed to look, as seen in the foreground. 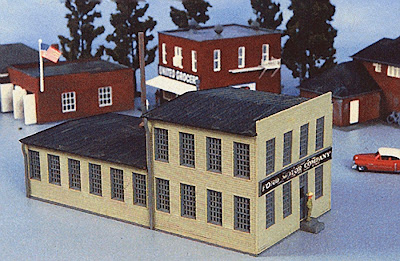 This building was not exactly what I had in mind. I needed a background structure at Ballard, and I liked the regular arrangement of large windows in this frame building for a manufacturing business, but wanted a different-shaped building. So I set out to “cut and paste,” if you will, and create something entirely new.
First of all, I wanted a less “stubby” building, and since I was aiming at a background structure, I could use both kit walls to make one side longer. Not visible in the view of the kit, above, is a loading door on the other side, and I wanted to include this for rail service. And the building seemed to sit a little low on the ground, so I raised it up on some 1/4-inch Plastruct rectangular tubing.
Here is a view of the back of the main wall, to show where I spliced pieces together to get a longer building with the proportions I wanted (arrows indicate line of joints). I spliced in a three-window section, so the two-story part is now seven windows long instead of four. You can see my splice plates at the joints, and the added foundation tubing also (click to enlarge if you wish).

And to make the building even longer, I built an addition, using the single-story rear part of the other side. Here is the back of that addition, which is elevated with the same Plastruct tubing foundation.

I wanted some rooftop machinery, so built a little styrene box, added a piece of diesel locomotive grille, and made ducts from pieces of styrene sprue. You can see the back of the box above; the photo below shows it from the front of this part. You can also see how the structure was tapered to fit my background space.

It’s evident here that I retained the as-molded light-gray plastic of the kit windows and doors, but painted the structure a pale bluish-green. It has also been weathered with some streaks from window corners and other features. Note that I painted the foundation tubing a tan concrete color
When arranged as they are on the layout, the two parts look like this. You can see here the adjustments made to the roof to accommodate the taper of both parts of the building, which of course fits the layout site. A small loading dock is needed by the freight door at the re-entrant angle in the structure.

Since the structure is back from the layout edge, I made a billboard-type sign, and added (non-operating) floodlights to illuminate it. 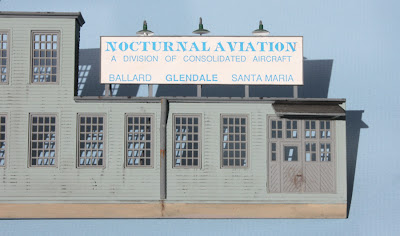 This industry was inspired by a Consolidated Aircraft company facility at the old Grand Central airport in Glendale, California, which I remember from my youth. The Grand Central airport terminal building, constructed in 1928, is still standing today (owned by the Walt Disney Company), but the airport closed in 1959. A number of movies were filmed there when it was still an airport, and many aviation businesses began there in the early days. I assume that Consolidated company was different than the one which merged in 1941 to form Convair. There is a nice Wikipedia entry about Grand Central for anyone interested.
The sign I made lists three plant locations, to suggest that this particular facility has siblings. (“Glendale” gets a little bolder lettering to suggest that the main company facility is there.) Consolidated manufactured, among other things, aviation electronics, so I imagine that being done at this company division. The name? Could refer to electronics for night flying, I suppose, but might also suggest that it’s kind of a fly-by-night outfit.
The Nocturnal Aviation structure is visible in many of my layout photos at Ballard, for example this one. I placed black construction paper inside the building as a view block for the many windows.

As with a number of the model projects I have described in my blog posts, the point is not to suggest that anyone else necessarily would want to duplicate what I did, but to show the approach and the results, hopefully to encourage a creative approach to kits, and experimentation with them, by others.
Tony Thompson
Posted by Tony Thompson at 9:40 AM

Email ThisBlogThis!Share to TwitterShare to FacebookShare to Pinterest
Labels: My layout, Structures, Weathering