Most model layouts have a fascia of some sort, to hide and dress up edges, and frequently Masonite is the preferred material. It can be curved to fit a variety of layout shapes, and offers a sturdy, smooth surface which is durable. What else is involved?
One important choice is the color chosen for the fascia. One wants it to look nice but be unobtrusive, and not detract from the real star of the show, the layout surface. In the world of the theater, the solution for such things is flat black, which does indeed make anything so painted tend to disappear visually, but is a stark contrast with the layout surface, and flat paint is prone to show scrapes and scratches. Other modelers have chosen paint colors like Forest Green or Dark Brown, and some have chosen lighter colors like Tan. I chose to clear-coat the natural color of tempered Masonite, which is a fairly dark brown. I like the contrast to the layout surface without particularly calling attention to it. I have varied the depth of the fascia on my layout by location, to suit the circumstances, as illustrated below.
Here is the appearance of my fascia when it extends to some depth below the layout. The natural color is obvious. This photo shows the area just west of my town of Shumala. Some screw heads are visible. I attach the Masonite with flat-head #6 or #8 screws and then paint them with acrylic Burnt Umber (dark brown), which matches most Masonite quite well. A couple of the heads in this photo remain unpainted. 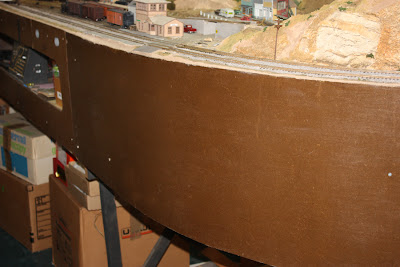 The reason for the depth of fascia in the photo above was partly to accommodate a seaside cliff and beach scene. (Originally there was a staging return loop inside this fascia also.) The fascia was simply cut lower at the point where the beach scene fit best. Also prominent here is an inset control panel, yellow for contrast, with a couple of throttle plug-ins, and my main power switch (with pilot light) for the layout. 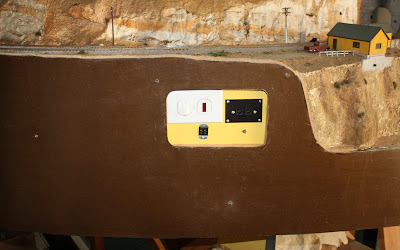 The end of the peninsula with the beach scene is still under repair from its previous incarnation and cross-country shipping (and storage for some intervening years), but here is how it looks from the standpoint of the fascia applied. Here you can see that the fascia has to be even higher to the right of the beach scene, as the hillside above the SP mainline tunnel rises upward. 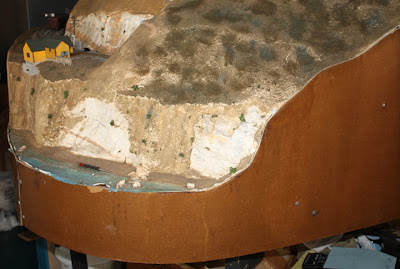 The scenery here represents what is called “coastal sage” in California. I will say more about that in a future post about landscape and vegetation communities, a vital part of accurate scenic representation in a place with such varied, diverse, and often closely intermixed landscapes, as is true of coastal California.
Another subject is creating shelving along the layout sides. Along much of the fascia at Shumala, I have opened a shelf beneath the layout to hold a control panel, along with waybills and waybill files, pencils, uncoupling picks, soft-drink cans, and so on, which I would prefer not to put on the layout surface. The bill box at far right was described in a previous post, at: http://modelingthesp.blogspot.com/2011/10/operations-role-of-agent.html . The vertical black strip is Velcro for throttles. 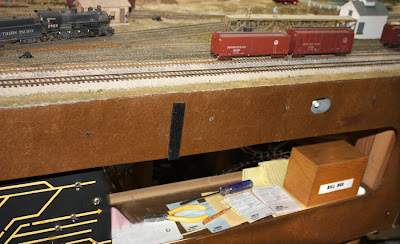 The newest part of the layout is the Shumala extension, already described and shown in a previous post, at: http://modelingthesp.blogspot.com/2013/01/the-shumala-extension-part-2.html . Fascia is needed to set off the edges of this new section, and scenery refinement requires the final edge to be in place, so that ground cover and other aspects can be brought to that edge.  Fresh fascia pieces have been cut and are shown below being applied there.

I have met modelers who regard layout fascia as strictly “cosmetics,” and they intend to apply it when the layout is otherwise complete. I don’t entirely understand this view, because I like to bring the ground contours and scenic materials right to the fascia edge. And another aspect of layout fascia design and construction is signage. I will comment on that in a separate post.
Tony Thompson
Posted by Tony Thompson at 10:04 AM

Email ThisBlogThis!Share to TwitterShare to FacebookShare to Pinterest
Labels: My layout, Standards