I wrote a post earlier about background flats, specifically the products of KingMill Enterprises. (You can see their currently available flats at their website: http://www.kingmill.com/shop/index.php ). My previous post on them is at: http://modelingthesp.blogspot.com/2012/08/background-flats.html . In this post, I will describe modifying one of these flats to suit a layout location, which I guess could be called “kitbashing,” by analogy with what we do with three-dimensional objects.
The KingMill piece to be modified is this one, named “Commerce St. Building Sides #9” (there are ten Commerce Street sheets), in the KingMill line of Radical Flats. With a single-story corrugated metal building removed and the bottom edge already trimmed, it looked like this.

I wanted to use the right-hand building, but to reduce it in height to fit better with its surroundings. I just cut off the top story, removed the story below it, and rejoined the pieces, simply taping them together on the back. 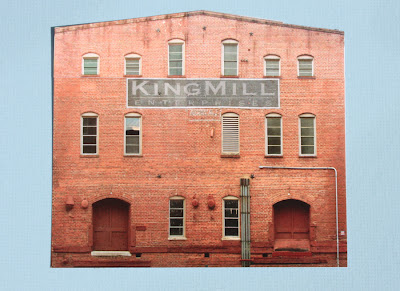 You can see in this photo of the just-rejoined flat sections that the upper section is a bit lighter in color than the lower part. I blended the appearance by gently darkening the upper section near the joint. I used Prismacolor pencils, mostly a brownish-brick red color called Chestnut, but with a little help from a slightly browner color called Chocolate. This made the color gradient on the flat look much smoother.
My next challenge was the sign. The sign provided, of course, is for the maker of the sheet, KingMill Enterprises. Nothing wrong with that, but I planned a different industry for this structure, and thus I made a sign for a printing business, Caslon Printing Company. This name of course refers to William Caslon, the famous English printer and type designer who, about 1720, created the enduring face which is named for him. Many printers in the American colonies as well as in Britain used it, and in fact it was used for the first printing of our Declaration of Independence.
The original KingMill sign is kind of grayed with age, which looks good. To get somewhat in the same direction, I made a sign (using Caslon type, of course!), but not simply in white letters on black. I made it in Photoshop, which permits you to vary the percent of black, whether starting with black or white. I lightened the black background to 70 percent black (thus making it a dark gray), and darkened the white letters to 10 percent black (thus a very light gray). I printed it out on a high-resolution printer at my local copy shop, and before attaching it to the flat, used the Chestnut Prismacolor pencil to add some patches of almost invisible color variation, along with another color of Prismacolor pencil, called “50% French Gray.”
The sign was made to match the dimensions of the one printed by KingMill, so it was easy to fit the location. I used rubber cement in the “contact cement” mode to attach it, cut exactly to cover the dark center of the original KingMill sign. 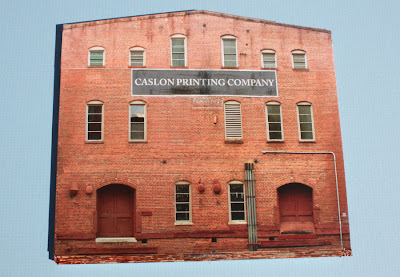 Next I attached the foamcore board backing (this process is described in my first post on flats, at the link given at the top of this post), again using rubber cement in contact mode on both surfaces to be joined. I noticed that like many KingMill flats, they sit a little low to the ground, so that loading doors are really too low for an HO scale freight car. Accordingly, I glued the flat about one-fourth of an inch above the bottom of the piece of foamcore. I then used the same Prismacolor pencils to color this “foundation” area of foamcore below the original flat. You can see this in the photo above.
I made the foamcore back smaller than the printed flat, so that the backing is not readily visible, and darkened the edges with a Sharpie brown pen: 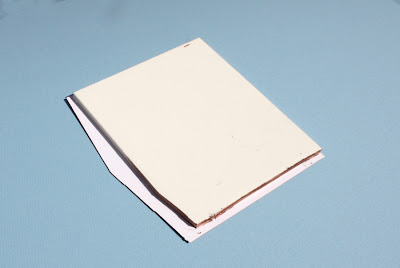 This is a pretty simple project, but I wanted to show that these fine flat building products are readily modified to suit what you need or want. I expect to experiment further with this process. Meanwhile, this printing company “building” is ready for placement on the Shumala extension.
Tony Thompson
Posted by Tony Thompson at 10:51 AM