I have offered comments in earlier posts about typography on the layout, which means choices and arrangements of type faces, which are used, for example, for signs on structures. My previous post can be viewed at: http://modelingthesp.blogspot.com/2011/11/type-and-typography-on-layout.html .
In this post I will offer further examples and describe my own approaches. When I know a particular sign requires a particular typeface, I will use it if I can, as in the case of the Southern Pacific depot I built for Shumala (see my post at: http://modelingthesp.blogspot.com/2012/11/a-new-depot-for-shumala-part-2.html ). The SP had a standard set of characters for depot signs, which they called “Egyptian,” and since it’s available in digital form, I did use it for the Shumala depot sign.
Among the signs I describe in this post are for the structures behind the depot at Shumala. Here is how they looked on the old layout, when this town was called Jalama (this photo was also shown in a post about layout holdovers, at: http://modelingthesp.blogspot.com/2012/05/survival-from-my-old-layout-2.html ). The store at photo center is named “Jalama Store,” since there was (and may still be) a store with that name at Jalama Beach. But the name is now obsolete. 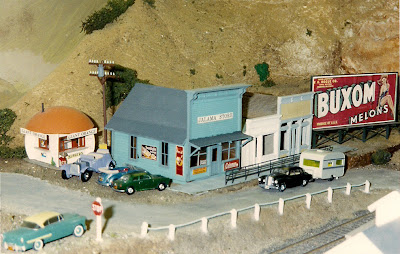 The store, built from a Chooch kit, is still intended to be a small grocery store, but I changed the sign to simply reflect the items sold, groceries and sundries. For this new sign, I used Copperplate Gothic, a face having vestigial serifs and with a similarity to a common style of signpainter’s lettering. Another reason I like this face is that it was created by the outstanding American type designer, Fred Goudy, in 1901.
To the right of the store are a pair of small structures, from Design Preservation kits, intended to be a cafe and tavern but never given signage to so indicate.The small cafe seemed an obvious choice to name the “Railroad Cafe,” as such cafes were often so named when located near railroad facilities. Since the building front is white, I thought to make the sign black, with white lettering. The lettering in this case is Franklin Gothic, a very generic-looking sans serif face widely used in advertising, and often copied by sign painters.
The tavern is named the “Dolphin & Anchor,” and has a symbol sign hung on a horizontal pole outside. This is much in the style of British pubs, and the lettering is from the Bembo typeface. The dolphin and anchor symbol, very familiar to anyone interested in type, was the printer’s mark of Aldus Manutius of Venice, the first great printer and the source of the name of the company (Aldus) which originally brought out the PageMaker page layout software. The Bembo face was named for the author of the first book which used it, published by Manutius, and cut by the great Francesco Griffo in about 1495.
I took the printer’s mark from a book on printing history (The Thames and Hudson Manual of Typography, by Ruari McLean, Thames & Hudson, 1992), and since it was in color, I duplicated that color for the building-front sign too, again in the spirit of many British pubs (you could Google “pub signs” to see examples). Here is the printer’s mark. 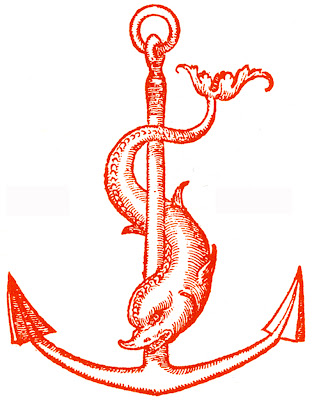 As with other signs, I sized them appropriately for their structures using Adobe Photoshop, and then printed them on glossy cardstock at my local copy shop. The “pub sign” is double-sided (just print the sign twice, glue back to back) and was glued to a brass wire of 0.022-inch diameter.
Here is a photo of that same scene shown above, with the re-signed structures. The “Giant Orange” stand remains as it was.

Here is a closer view of the new signs. The lunch counter has not yet been installed in the cafe. 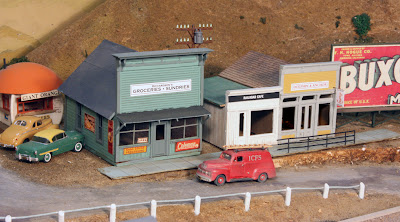