A packing shed for Shumala, Part 3

My first post about this shed structure described its general features and how I began construction, including my clothespin clamps; it can be viewed at: http://modelingthesp.blogspot.com/2013/01/a-packing-shed-for-shumala.html . The second post covered most construction aspects, as shown at: http://modelingthesp.blogspot.com/2013/02/a-packing-shed-for-shumala-part-2.html . This final post covers final assembly of the structure; construction of the loading dock (which was an interesting challenge), and painting and lettering.
Once I had all main structure parts assembled (except for inserting windows, which I believe should be done last), I gave them a priming coat of Floquil White. This includes the fascia boards and undersides of the subroofs. For the window inserts themselves, I stuck them to a strip of tape, sticky side up, to hold them for painting, as you see here. Here also are all the subroofs (seen from the underside), the clerestory, and the main structure. 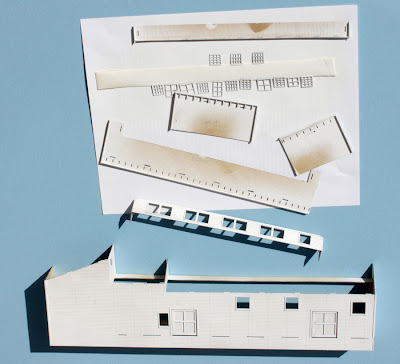 Next I applied subroofs A, B and C to the structure. With three of the four subroofs installed, all trim touched up with white, and the kit’s convenient stick-on roofing applied, the structure looked like this. 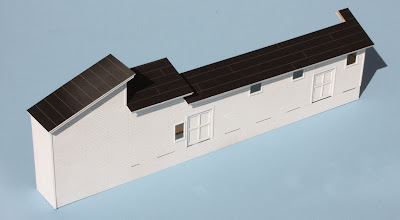 In this photo, only the clerestory remains to be installed, plus the loading dock. The clerestory was a minor challenge, because the long, flexible wall and roof pieces did not seem to want to stay straight. Again, I used my scale 8 x 14-inch stripwood to stiffen these parts so that they would be straight, and fit properly into their location in Subroof C.
The loading dock was done separately, and was intended to be painted separately also. I began by setting up a gluing support, using wax paper against all surfaces which would see glue. A 90-degree block was taped to a straightedge, and the subdeck taped to that, keeping it vertical. Then each post was given a dab of yellow glue and inserted into its slot, checking each to make sure it was perpendicular to the subdeck. With all posts inserted, it looked like this; you can just see the wax paper.

Once that was dry, I added the kit cross-bracing along the inside of the array of posts, and added more diagonals with scale 1 x 3-inch stripwood.

Meanwhile I stained the deck itself (the upper piece) with stain from an ancient bottle of Floquil Walnut Stain. Once this was dry, I glued and clamped the two parts together, the deck and the subdeck (with its attached posts). The deck assembly could then be keyed into the provided slots in the main building.
The sign for the building was taken directly from a photo of the actual sign, which has 3-D letters, for the Phelan & Taylor facility in Oceano, California. That prototype photo was shown in a prior post, which you can view at: http://modelingthesp.blogspot.com/2012/11/visiting-area-you-model-part-2.html .) I used Adobe Photoshop to remove the corrugated-iron background while keeping the 3-D shadows, then to create a new background of light blue, and scaled the sign appropriately for this packing house. The HO scale sign was printed out on glossy card stock, using a high-resolution color laser printer at my local copy shop.
Once all these steps were finished, but before inserting any windows, I gave the entire structure a light overspray of Dullcote, both to dull any shiny spots and also to provide a flat surface for weathering.
The window assembly process is simple and convenient. The double-stick tape on the back of each window is pressed onto the window glazing, and the glazing being oversize, a gluing surface to attach the window assembly to the back of the wall is provided. Here are two of them assembled.

Here is the completed structure. The construction turned out to go well, and in some ways the absence of instructions pushed me to think more carefully about the sequence of assembly steps, and to devise a sequence that worked for me. I entirely endorse and recommend this kit, though it might be a big challenge for a beginner. 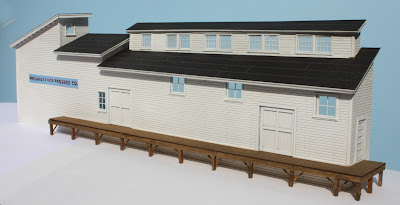 The building does need some weathering, which I will do after choosing a final position on the layout.
I am happy with how the packing shed turned out, and I look forward to adding it to my Shumala extension.
Tony Thompson
Posted by Tony Thompson at 11:24 AM