This is my third and final post about the Prototype Rails meeting at the Hilton Hotel in Cocoa Beach, Florida, held during January 10–12, 2013. My first post was a general one, and contained comments about a couple of the many clinic presentations, which were ably organized by Jeff Aley. It can be found at: http://modelingthesp.blogspot.com/2013/01/prototype-rails-at-cocoa-beach-2013.html . The second post was about the displays in the hotel ballroom, including large and small model manufacturers, and is at: http://modelingthesp.blogspot.com/2013/01/prototype-rails-at-cocoa-beach-2013_28.html .
In this post I want to show a few of the displays by individual modelers, somewhat randomly chosen (unfortunately I have to omit a few I wanted to show, because I failed to get adequate photos of them). I will start arbitrarily with Eric Thur’s extensive display, notable for his inclusion of prototype photos of each car. Here is an overview of the center portion of the table Eric used, which shows a number of Eric’s models, though not everything: 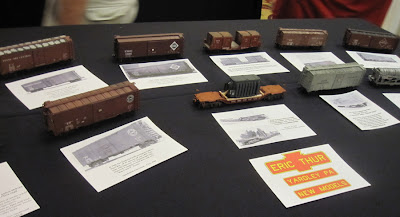 This next view shows an area on the table behind the view above, with a group of models by John Johnson, and is a little closer to the models. You can see how nicely weathered these are, and they too have accompanying prototype photos. 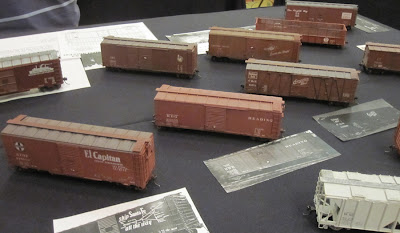 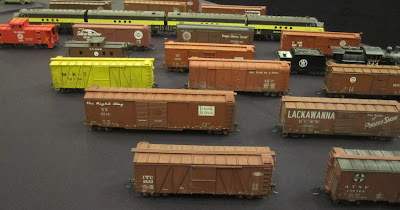 The inventer, organizer and grand poobah of this meeting, Mike Brock, only lives a few miles from the hotel and accordingly can readily bring a good group of models, many of them freight cars from resin kits. You will notice that he and Craig Zeni have both built a yellow Katy box car (a Speedwitch Media kit which is on my own workbench at the moment). 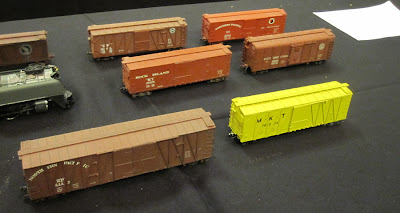 Another group of excellent models was shown by Fenton Wells, and my several efforts to get a good photo of the entire group were not successful. But here is a single car, illustrating how Fenton provides background for each model. This one happens to be from a Speedwitch kit also. 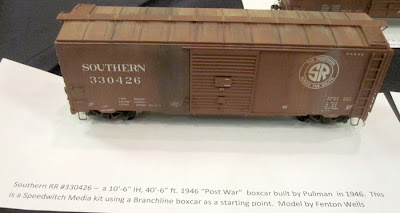 Last, I will include my own humble display, containing only two cars on account of having to travel with them in carry-on luggage. Both cars have been the subject of past blog posts. A series of posts described my efforts to complete the helium car at left (you can work backwards from the final post; it is at: http://modelingthesp.blogspot.com/2012/11/helium-cars-part-3.html ). The Kansas City Southern box car at right was an early “Shake ’n’ Take” model, as described earlier (the final post about it is at: http://modelingthesp.blogspot.com/2012/07/shake-n-take-kcs-rebuilt-box-car.html ).

I do enjoy the chance to show off recent models, and if I lived closer to Cocoa Beach, I could take more models – but I don’t plan to move away from Berkeley any time soon!
Tony Thompson
Posted by Tony Thompson at 10:07 AM