In my initial post about the Cocoa Beach meeting this year (view it at: http://modelingthesp.blogspot.com/2013/01/prototype-rails-at-cocoa-beach-2013.html ) I commented about clinic presentations and some of the social aspects. In this post and in another post to follow, I want to say something about the outstanding model display, held in the hotel ballroom. These have been a feature of this meeting from its beginning over ten years ago, and hundreds of outstanding models of various eras continue to be shown, year after year. But I should also mention that a number of manufacturers, large and small, also display in the same room. That makes the ballroom quite a center for social activity as people circulate among all the fascinating tables. Here is a general view, with meeting stalwart Marty Megregian at lower right. 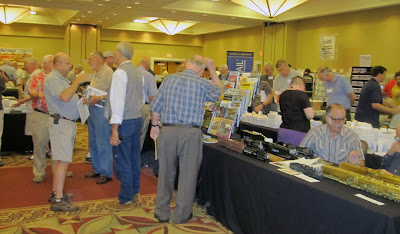 Among the faithful manufacturers who come to this meeting is InterMountain, and they always show forthcoming models along with a selection of recent products. Seated at left with his laptop is Frank Angstead, IM’s president. At right front of the display is the forthcoming offset hopper car in HO scale. 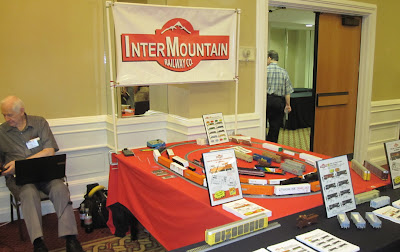 Smaller manufacturers are especially interesting, since many of them are not well known to a lot of modelers. These usually include Southern Car & Foundry, Rail Shop, Rapido, Archer Transfers (makers of the famous decal rivets), ExactRail, and Funaro & Camerlengo. Here is part of the F&C display, with Sharon Camerlengo in the right background. 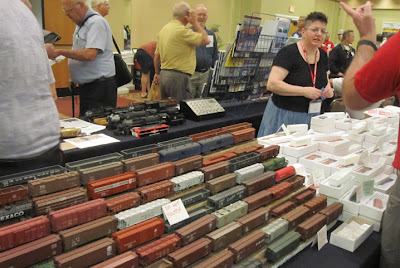 I will just include a few model displays in this post. I was intrigued by the outstanding model car graffiti by Thoroughbred Railroad Models, accurately duplicating prototype cars, as was evident since each model was accompanied by a prototype photo. I have commented previously that I believe modern modelers who omit graffiti from their freight cars are distorting reality (the post is at this link: http://modelingthesp.blogspot.com/2013/01/graffiti-for-modern-freight-cars.html ). Here is an overview of the Thoroughbred display (you may click to enlarge):

One example of a nicely duplicated, complex prototype is this one; the same model is visible in the upper right corner of the photo above. 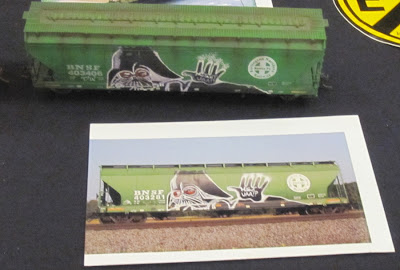 This concludes what I wanted to say in this post about one of my favorite meetings of any year.
Tony Thompson
Posted by Tony Thompson at 12:30 PM