This meeting, which began about ten years ago under the leadership of Mike Brock, and continues to be a strong gathering each January, was once again held at the Hilton Hotel in Cocoa Beach, Florida. Mike is the leader and main organizer, but he has major help from his committee, particularly Marty Megregian and Jeff Aley. To read more, you can visit the convention’s web site at: http://prototyperails.com/ .
A core part of the meeting is the clinic program, spread over two days, Friday and Saturday, with a few clinics on the preceding Thursday night. This year’s program was varied and strong, as it usually is. One cannot, of course, give any idea of these talks with photos, but I will show a couple. First, a typical clinic room, with Frank Peacock just getting set up to present his talk on freight car consists, drawn from conductor time books for the Oregon Short Line. That’s Frank on the left, with Richard Hendrickson on the right. 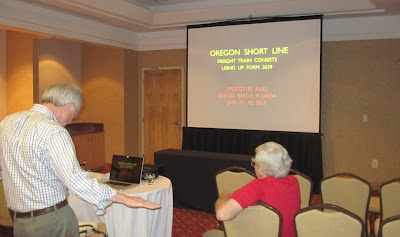 A second talk involved a very challenging problem in reaching the audience. Ken Tendick offered a two-part clinic on building a resin kit, which he did on a table in front of the room. Of course only those in the front row seats would really get a decent view of what he was doing, so a video camera was used to feed the room projector, and a substantially enlarged view of Ken’s hands and the model work was readily visible. This arrangement is not easy to photograph, but this image gives some idea of how it looked from my seat, ten or so rows back.

I believe the audience really did get to see what was going on, and hopefully at least a few realized that resin kits are not an impossible challenge, as Ken worked steadily along and clearly showed that each step is pretty straightforward.
A tradition of eight or so years at Prototype Rails is the “Shake ’n’ Take” session, with a pre-selected kitbash model chosen each year, and with the generosity of some manufacturers, especially Accurail, and the inspired leadership of Greg Martin, this has been an ongoing success. This year it is a 37-foot National Car Company meat reefer, which will be made by cutting down an Accurail wood reefer. Likely I will be reporting on my own progress with this project. Here is a photo of Greg kicking off the session (facing the audience, near the screen), with the back of Roger Hinman’s head nearest the camera, just left of center. 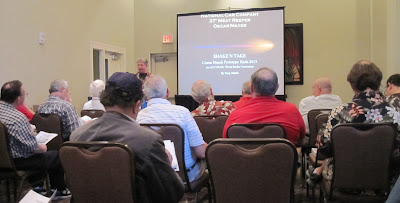 For one example of a “Shake ’n’ Take” car project, you can read my post about one of the cars, at: http://modelingthesp.blogspot.com/2012/07/shake-n-take-kcs-rebuilt-box-car.html .
Naturally everything is not entirely serious, and a now-established tradition is a visit to Roberto’s “Little Havana” Cuban restaurant, just a couple of miles away. 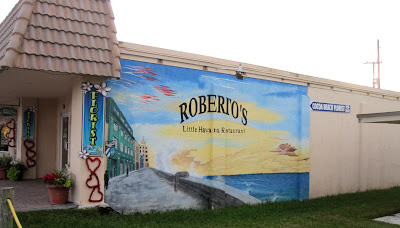 Several of us made a point of heading off to Roberto’s for dinner on two nights, and there are those in the crowd who actually eat three meals a day there, to enjoy even more of Roberto’s outstanding presentation of a distinctive cuisine. Here are some of us on one of the nights. From near left, they are Larry Kline, me, Richard Hendrickson, Dave Hussey, Lindsay Raley, and Bruce Smith. Several of us, naturally, are wearing our Friends of the Freight Car red shirts. If you don’t already know about these, I’ve written a brief history, available at: http://modelingthesp.blogspot.com/2011/10/friends-of-freight-car.html . 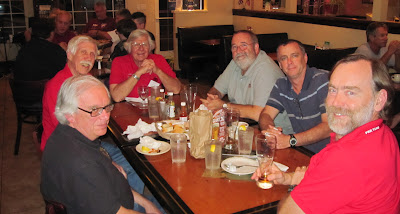 Well, that’s one part of the story of the Cocoa Beach meeting. I will say something more extensive about the model displays in a following post.
Tony Thompson
Posted by Tony Thompson at 3:13 PM