This post is an update to the previous post with this number (99), to respond to thought-provoking comments by John Barry. I felt it might be better to give them some space for elaboration, rather than make a short response in the comments to Part 99. (You can read that post at this link: https://modelingthesp.blogspot.com/2022/09/waybills-part-99-more-on-overlay-bills.html )

Let me begin by show again John’s comments, divided into two parts. Here is the first:

“Why bother combing through all your outbound bills? Why not generate SP bills for all of your cars with just the car info that shows above the overlay and have the remaining fields blank? Three items in the sleeve, the unique inbound full Bill, the empty car bill and behind it, the blank outbound Bill with the car info. Make all your outbound loads short bills that you can slip on top of the car specific card. File your used inbound bills by industry and car number and your outbound bills by industry only. That should minimize time on searching for a suitable waybill as you re-stage. You can also add yellow delivery overlay bills to direct empties to industries for loading.”

There are several parts to John’s comments, so I want to answer each. First, John’s suggestion that all cars have a SP “blank” waybill: he is right that this would work. But in effect, doing this wastes one bill. I did start to do this with my perishable bills for reefers, and realized, “why waste a bill?” Any use for another destination makes an overlay necessary, but for at least one movement, no overlay is needed. And I have used overlay Empty Car Bills from the beginning.

His suggestion, that all bills be filed by industry, is what I already do. And within each industry file, the bills are in order, first alphabetically by reporting mark, then by car number for each reporting mark. This makes bills easy to find, and in fact I do little “searching” for bills. This is because of the tool I created to list existing bills, my “pairs list,” which I’ve described in previous posts (for example: https://modelingthesp.blogspot.com/2012/02/waybills-17-pairs-list.html ).

It is quick and easy to look up any car number in the pairs list (so named because it shows pairs of industries, the shipper and the consignee), pull the corresponding bill, and add overlays if needed.

My storage system uses a storage box produced by one of the companies that makes storage materials for baseball trading cards (the clear plastic sleeves I use for waybills were intended for those trading cards). I described that in a previous post (see it here: https://modelingthesp.blogspot.com/2017/03/waybills-part-58-more-on-managing-bills.html ). Here is what it looked like, with dividers for industries, in a photo from a few years ago (it now contains more waybills): 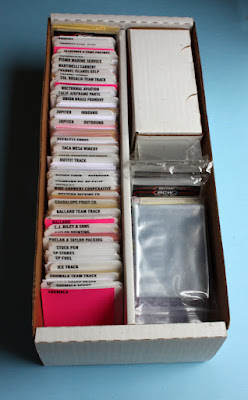 Let me now turn to the second part of John’s commentary:

“After a car is spotted, if it still has its inbound Bill, the next session, it’s still unloading. If you’ve pulled the inbound Bill, the empty car card will show, and you can either send it home by simply removing the inbound Bill between sessions or send it for loading with an industry overlay. Spotted empties get their empty car card moved to the back of the sleeve when loaded and a destination overlay added. From staging, pull and store the car and store it with its sleeve of empty car and SP blank load bills, ready for a new inbound Bill.”

In an operating session, any car that will not be moved will not have a waybill visible to crews (I separately store waybills for “inactive” cars). For operators, this is prototypical: you handle the cars for which you have paperwork. The railroad was in some ways just like the military: nothing happens without paperwork.

I don’t remove the bill with the inbound load for a car that is spotted: it is just slipped behind the yellow Empty Car Bill that is also in the sleeve. That yellow bill returns the empty (commonly)  to Los Angeles, or other destination.

Here’s an inbound load, and an Empty Car Bill to return the car when empty, both in the sleeve. This particular Empty Car Bill moves the car homeward via the reverse route (see the inbound waybill; you can click on the image to enlarge it if you wish). 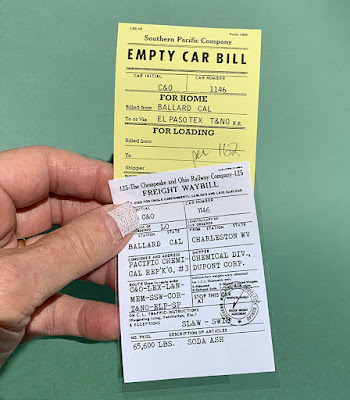 For the opposite kind of sequence, in which an empty car is spotted for loading, then later picked up with an outbound load, the process is reversed. That is, the car arrives with its inbound yellow bill in the sleeve, then the outbound bill in the sleeve behind the yellow bill simply comes to the front. Both items in the sleeve can be overlaid with a partial or overlay bill of the correct type.

To summarize, John suggests a series of waybill actions that are the same as what I do, with one major exception: I don’t have, and don’t plan to have, a bunch of “blank” SP waybills. As I said, I don’t see any point to “wasting” a blank bill. Why not have one of the destinations for that industry be on a bill? If it’s a common destination, I can also make a duplicate as an overlay so that other cars can do the same.

Thanks again to John Barry for carefully thinking through the waybill process, and making interesting suggestions about how it can be managed. I have enjoyed thinking through this process anew, and I hope my responses and explanations are clear.