What the heck is a “pairs list?” That’s what I will explain in this post. First, some background. The system of waybills I use on my layout is a system using clear plastic sleeves to play the role of car cards, with waybills inserted. This was described in my magazine article in RMC (“Prototypical Waybills for Car Card Operation,” Railroad Model Craftsman, December 2009, pp. 71–77), and parts of the story have been told in more detail in previous posts in the “Waybills” thread on this blog.
In my system, the focus in creating waybills is on loads: what loads would come into an industry, what loads would be shipped out of an industry? Appropriate waybills are then created for those loads, without consideration of which cars might carry them (since the car is designated on the waybill sleeve, not on the waybill itself, in my system). As I’ve described previously, a great source of shippers and consignees around the country is the OpSIG database, which is online, of such businesses all across the U.S. and Canada. And if you can find them, shipper guides for individual railroads are even better.
Now of course a person may have a freight car, such as a depressed-center flat car, and then want to create (a) a load or loads for it, and (b) waybills corresponding to those loads. Or maybe you have a pickle car . . . But in most cases these specialized cars are mainline cars, not cars destined to sidings on my branch line, and thus, for me at least, represent a somewhat separate case. I will return to that below.
One of the interesting aspects of creating a different waybill system for Otis McGee’s layout (see for example the following post, which was no. 9 in the “Waybills” thread: http://modelingthesp.blogspot.com/2011/07/waybills-9.html ) is that the focus is kind of opposite. There is not a lot of on-line switching on Otis’s layout, but we have lots of cars to move. So the focus becomes finding loads to fit cars, rather than the other way around.
To keep track of the shipper-consignee pairs I was creating in Otis’s waybills, and also to track car assignments and traffic categories, I began to keep a kind of log of these pairs, which I call a “pairs list,” thus the title of this post. Here a set of sample entries, to show what I am creating: 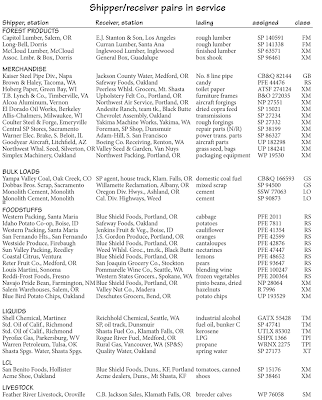 These particular shippers and consignees are mostly prototype ones, drawn from shipper guides and other sources. Note that the car initials and numbers for these particular bills are identified, since all waybills on Otis’s layout stand alone, that is, the car initials and number are part of the waybill. The list above is just a small sample of the existing pairs list, chosen for illustration.
Note in the list that there are, naturally, both northward (railroad eastward) and southward loads, though lumber is southward and most perishables northward. This sample list is chosen in part to display the varieties of cargoes in the list, and some of them, such as lumber loads and cargoes like locomotive fuel, have multiple examples among the waybills. A few on-layout origins and destinations are also included.
One advantage to this kind of record is that it allows examination of all waybills in a traffic category at a glance, and can indicate geographic areas not being served, traffic categories neglected, and specific cargoes over- or under-emphasized. The list is also readily electronically searched for car numbers, but can equally easily be searched with the naked eye, because it is in order within each traffic group by, first, car type, second, reporting mark, and third by car number. One can quickly check if a particular car is in a particular part of the list.
Though there are no particular examples in the short list shown above, those specialized cars like depressed-center flat cars are easily accommodated in this kind of listing, because they simply fit into a traffic category like “Merchandise.” Since the list is car-oriented by design, the specialized car is a natural fit.
Once again, this exercise has been interesting for me because of the “reverse” focus compared to my own layout, where I think about loads without respect to cars, to this focus for the McGee layout on cars which need loads. It’s always good to stretch how you think about these kinds of things.
Tony Thompson
Posted by Tony Thompson at 5:40 PM