To meet part of the needs in my freight car fleet for SP box cars (see my analysis of needs for SP box cars within my boxcar fleet, in a previous post, at: http://modelingthesp.blogspot.com/2011/07/choosing-model-car-fleet-sp-box-cars.html ), I am assembling some kits. I thought it might be of interest to relate the thinking behind some of my detail changes.
The kit I’ll describe in this post is an old IMWX kit for an SP Class B-50-20 car, from a special run made for the La Mesa Club, with “Return to SP agent Bakersfield” placards on them. This kit is numbered SP 83546, and correctly includes welded 7-panel doors. But the kit also includes a representation of a wood running board (all the cars in Class B-50-20 were built with Apex steel-grid running boards and brake steps), and the kit has Ajax handbrake gear (the car with this number would have had an Equipco handbrake). These kinds of car specialties are all tabulated in my book on SP box cars, Volume 4 in the series Southern Pacific Freight Cars (Signature Press, 2006). Here is a clear view of the end for the prototype class (though it’s one of the cars with Youngstown corrugated doors): 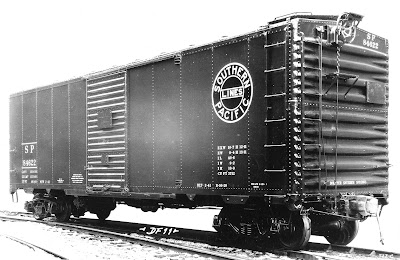 The Equipco hand brake and metal brake step are evident on SP 84822. Next, here’s a car with a number quite close to the IMWX kit number, and with the panel door; the Barber trucks with spring planks can also be discerned.

Both these builder photos are from the Shasta Division Archives. A word about the doors. The “Creco” panel door, so named for its maker, Chicago Railway Equipment Company, was available by the end of the 1930s in either welded or riveted form. But in 1941, Creco spun off its door business as the Superior Door Company (headquartered at the same address in Chicago). The purchase of the welded doors for Class B-50-20 was made by SP prior to this change, however, so these doors are properly called “Creco doors” (as indeed SP called them in its order summary), though to many modelers the Superior name is more familiar for welded doors.
Returning to the kit, there are lots of etched metal running boards which could be used for this project, and I often choose the various Plano products. But for this one, I decided to use an old Overland etched-stainless board, and an etched brake step. The only trick is to get the corner grab irons correctly spaced from the surface of the lateral board, prior to applying CA to hold the parts. I used a normally-closed spring-loaded tweezer to hold the grab iron against my styrene spacer (the spacer was shown in use to space grab irons, in this post: http://modelingthesp.blogspot.com/2012/01/modeling-meat-reefers-2.html ). It looked like this before CA attachment:

Kadee makes a superb Equipco brake wheel, which I also used. With the brake step and brake wheel in place, this is the model:

Most other details on the car were straight from the kit. I added weights inside the car in the form of large nuts, as I showed for the PFE R-30-16 reefer project (at: http://modelingthesp.blogspot.com/2011/08/small-modeling-project-pfe-r-30-16.html ). I don’t have replacement trucks on hand that adequately depict the correct Barber bolster ends, so for the time being will just retain the kit AAR trucks, which at least do have a representation of the spring planks. As can be seen in the photo above, I have installed Kadee No. 58 couplers, which is my current standard; for more on freight car standards, see:  http://modelingthesp.blogspot.com/2011/03/model-freight-car-standards.html .
Here is the completed car end:

and here is a side view of the entire car, still needing weathering, of course.

The detail changes in this model are minor, but I described them to show an approach to making models closer to prototype, for which an out-of-the-box kit often falls short. Knowledge of the prototype you wish to model, combined with awareness of appropriate after-market detail parts, permits these improvements.
Tony Thompson
Posted by Tony Thompson at 12:08 PM