I described my method for making pipe loads in the first post on this thread, last month, using soda straws or coffee stirrers as materials. Here’s a link to that post: http://modelingthesp.blogspot.com/2012/01/open-car-loads-pipe-in-gondolas.html
In a previous post (on ore car models) I mentioned briefly  in passing how I have made my own loads of bulk materials for open-top cars (see: http://modelingthesp.blogspot.com/2011/05/choosing-model-car-fleet-10-ore-cars.html ). The method is simple and easily duplicated for various kinds of loads, such as coal, ballast, sand, or ore.
Since my freight cars are weighted in the empty condition to a proper level, I want most loads to have minimal weight. (Certainly the soda-straw and coffee-stirrer pipe loads fulfill that goal!) To explain the point, I should comment on car weighting requirements.
I use essentially NMRA standards, which for HO are one ounce, plus one-half ounce per (actual) inch of length. A 40-foot freight car in HO is about six inches long, so this makes one ounce plus three ounces, or a total of four ounces. I rarely weight cars above this level, but do have cars with less weight, down to the vicinity of three ounces for 40-foot cars. My minimum radius is 30 inches on the layout, so the biggest problem with underweight cars, the danger of “stringlining” or pulling cars off on the inside of curves, is rarely a problem as long as weight is not too low.
But too much weight can also be a problem. When the NMRA Standards people did experiments on car weight levels, an important finding was that the biggest problems arose with major differences among car weights, almost regardless of whether the average weight of all cars was high or low. I take this to heart in trying to keep both empty and loaded weights of cars within a consistent range, normally not below three ounces, while aiming at four ounces (all for 40-foot cars, of course).
Back to open-top car loads. I build a balsa wood platform to sit in the car, whether it is a hopper or gondola. At one time, I carved larger balsa pieces to shape, but in more recent times have found it quicker and easier to use papier mache load shapes on top of the platform. Either way, appropriate materials are then glued on top of the load shape, whether coal, ballast, or whatever, using the standard modeling materials (for example, ballast) or “found” material in nature, as needed.
In a hopper-type car with slope sheets, the balsa piece can simply sit on the highest point of the slope sheets. The photo below shows an example of this simplest load type, a balsa piece, with papier mache atop it for the load shape. It is of course sized for the (ore) car in which it will ride.

When “ore” material is glued onto this load, here is how it looks in the car.

This car may be of interest. It’s built from the Grandt Line kit for a Gilpin Tram ore car, a quite small 2-foot-gauge prototype car, and is an O-scale kit (“Large Ore Car,” kit 3050, still available). But its body width is just right for HO standard gauge, and it’s a less-tiny car in HO. I simply applied HO brake gear, trucks and couplers to produce this car, and lettered it for a mining company on my previous layout. If the Gilpin sounds interesting, there is no better source of information than Mallory Hope Ferrell’s book, The Gilpin Gold Tram (Pruett Publishing, Boulder, CO, 1970).
With most of my homemade loads, I write on the bottom which car type it was built for. If you only have a few loads, this may not be necessary, but as soon as you have a lot of open-top cars, memory may not always deliver the answer you need. The one shown above looks like this on the bottom:

In a gondola, more of a structure is needed. I show below the kind of loads I once built, with an entire block of balsa; this one is a gravel load, sized for Hobbyline high-side gondolas.

It is simple, in that it is all one piece, and the balsa doesn’t weigh much, but this is more trouble to build (carve, really) than the papier mache type.
The kind of gondola load I have made more recently looks like this, with supports underneath for proper height inside the car, and papier mache on top for load shape. This is a coal load for an Ulrich GS gondola.

In a previous post, describing my choices for a fleet of gondolas for my layout (see: http://modelingthesp.blogspot.com/2011/04/choosing-model-car-fleet-8-gondolas.html ), I mentioned the use of domestic coal by Southern Pacific for heating in everything from caboose stoves to section houses to depots. Here is the load shown above, in a Utah Coal Route gondola (the same photo was shown in the post just cited). 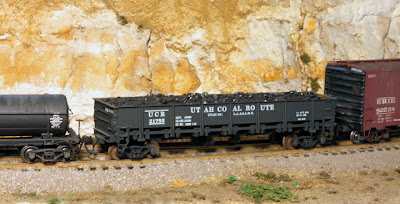 Nowadays, many cast-resin loads are available for open cars, especially hoppers, and this is a great convenience. But many of them have unrealistic colors or textures, and for those loads, a modeler may choose to glue better materials to the top of a cast load, or repaint/re-stain/re-tint the load with washes or airbrush.
There is also the problem that using all Brand X bulk loads in a string of cars will produce identical-looking loads. In contemporary railroading, with flood loaders at many mines, this might be realistic, but in the steam and transition eras, photographs show adjacent open-top cars with clearly non-identical bulk load shapes. These kinds of images should be your guide.
And commercial loads of scrap? Even the best resin ones need some modification of the materials in the load, and touched-up paint, if not a complete repaint, to look realistic. But this is a somewhat separate topic, and deserves its own post.
I continue to construct my own loads for many cars, and will describe other load types in future posts in this thread.
Tony Thompson
Posted by Tony Thompson at 10:07 AM