In several of the posts in this thread (most of them last spring), such as the first one ( http://modelingthesp.blogspot.com/2011/01/modeling-freight-traffic-coast-line.html ), I discussed the freight manifest schedules on the Coast Line. Here I want to present some data for the mid-1953 schedules, drawn from a 1954 document, Southern Pacific’s “Condensed Perishable, Merchandise and Manifest Train Schedule No. 15,” published for Pacific Lines on March 5, 1954.
This Schedule in the 1950s was a single large sheet of paper, with both timetable schedules and train notes, for the principal routes over which these trains ran. In addition to the Ogden, Golden State, Sunset, and Shasta routes reaching out to the boundaries of the Pacific Lines component of SP, there were also schedules for the San Joaquin Valley and Coast Routes. I will show here just the Coast Route part of this document.
Here is the timetable part. I will offer some analysis in a moment. 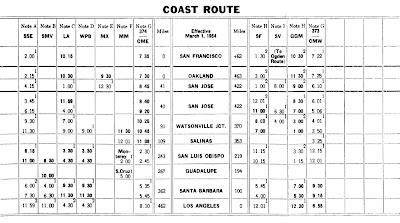 Notice that, unlike employee timetables, the entire route is shown between Los Angeles and San Francisco, though it comprises parts of two divisions (Coast and Los Angeles in 1953). Light figures here are AM times, dark figures PM times.
The notes are most helpful in that they identify what each train does and what connections it is expected to make. You can click on this to enlarge it. 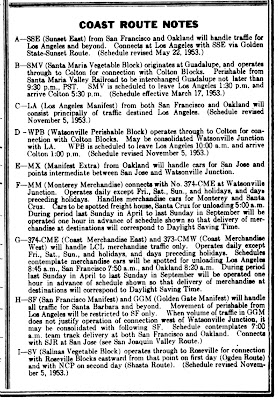 The dates of the creation of each individual schedule are also given, most well within 1953, which is why this is valuable for my own 1953 modeling.
A couple of these trains, the MM and the MX, operate on the far north end of the Coast Route, and in addition, the SV trains head northward, thus don’t impact my modeled territory south of San Luis Obispo. But all the others do matter to my layout, to one degree or another. The hottest freights are the SSE (“Sunset East”) connecting with other eastward traffic at Colton, and the LA (“LA Manifest”), both eastward, and westward trains SF (“San Francisco Manifest”) and GGM (“Golden Gate Manifest”).
Principal perishable movements are the SMV (“Santa Maria Vegetable Block”) and the WPB (“Watsonville Perishable Block”), as described in the notes. The SMV is described as connecting with departing Colton Blocks of perishables at Colton, so that the schedule of that train would be critical. When perishables were in the SF, they would need to connect with the SJR (“San Jose-Roseville”) train, making that train’s schedule more critical.
All these trains correspond with what I described in the first post on this thread (on the basis mostly of interviews), in the link given above, plus the second post (at: http://modelingthesp.blogspot.com/2011/01/modeling-freight-traffic-coast-line_17.html ),  except for the SSE, which was referred to in later years as the CLM (“Coast Line Manifest”) and played the same role. Information here from the actual SP Schedule clarifies and solidifies the insights I had obtained earlier.
Comparing these train symbol schedules to the employee-timetable train number schedules, the only corresponding eastward daytime train is the LA, matching approximately with timetable train 916. In 1953, westward trains were not scheduled over the Guadalupe Subdivision (between San Luis Obispo and Santa Barbara), and would have operated as extra trains, but onward from San Luis westward the SF and GGM seem to match, respectively, timetable trains 919 and 923. I should emphasize, though, that Mac Gaddis and others I interviewed stressed to me that train times in the employee timetable were not rigorously followed, except for those trains with vital connections, such as the SSE or SMV.
The importance of the 1954 “Condensed Perishable, Merchandise and Manifest Train Schedule No. 15,” is that it provides the framework of important mainline freight trains which I need to operate on my layout, even though these function mostly as background traffic for the most modeled part of the layout, the Santa Rosalia Branch.
Tony Thompson
Posted by Tony Thompson at 11:18 AM