Awhile back, I started a thread on modeling meat refrigerator cars, including some statistics on the car fleet size of the major meat packers (available at:
http://modelingthesp.blogspot.com/2011/02/modeling-meat-reefers.html ). Now I want to update what I’m doing.
To repeat somewhat, here is the starting point, a LifeLike version of the old Varney plastic reefer, picked up at a swap meet for $1.00:

As mentioned in the prior post, the paint scheme shown corresponds to no prototype scheme I know of, but that doesn’t matter, as it will be stripped off anyway.
First step is to slice off all the side and end grab irons and ladders, and roof corner grab irons. Each of the worked areas is sanded smooth, then re-scribed so that the appearance of individual boards is continued through each area. I also removed all the cast-on sill steps, as they are much too heavy to look right; they will be replaced by A-Line metal steps.
Fore each expected prototype, I examined prototype photos to determine whether ladders or grab-iron rows were used, and whether straight or drop-style grab irons were chosen (more on this in a moment). I checked to see which shape of sill steps was used. Also, of course, the type of roof needed to be determined if possible.
The roof that comes on the model represents an outside metal roof, with battens at panel seams in the roof. This is all right for several potential prototypes, but a few still had the older standard of board roofs. I should emphasize that such a roof is not just a layer of boards, but actually had two layers of tongue-and-groove boards, with metal sheets sandwiched between the two layers, which is called an inside metal roof. To represent it, I sanded off the battens (and ice hatches) to smooth the entire roof, and added sheets of scribed styrene for such cars as would need it.
Here’s a car with this treatment. The running board is original, and by itself would be too thick, but the thickness of the scribed styrene applied atop the old roof surface reduces the apparent thickness to a reasonable quantity. 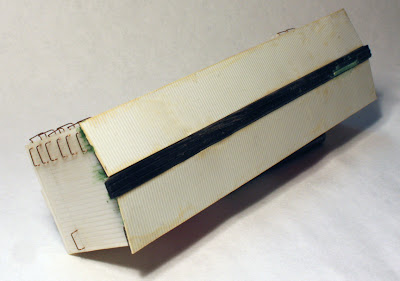 Drop grab irons, an A-Line product, have been placed on the car, but not yet spaced and glued (the car is destined as a Swift car, in a number group which had grab irons of this style). Ice hatches will of course be added later.
Speaking of grab irons, how do you know how to space them away from the car side? This was a requirement of the federal Safety Appliance Act after 1911, and is shown (with various updates) in Car Builders Cyclopedia issues over the years. Here is the relevant part, abstracted from the 1940 Cyc, page 1090 (click to enlarge): 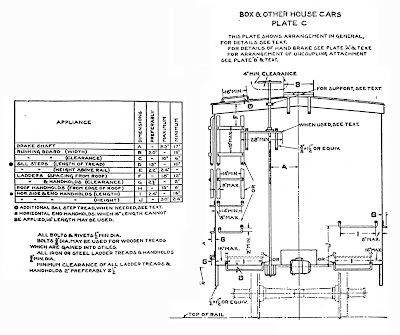 For this question, we need dimension “G” in the table, which shows a minimum of 2 inches and no maximum, and also indicates “preferably” 2.5 inches.
My way of implementing this stand-off distance is to put a strip of styrene behind the row of grab irons. I use a strip of 0.030-inch-thick sheet, which translates to 2.61 inches in HO scale, then apply tiny dabs of CA adhesive with the tip of a pin to each leg of each grab iron. This photo shows how the spacer looks.

As I get more construction done, I will post updates.
For background, and to try and show where I’m headed, here’s a quick summary of what I know about reefers of the major meat packers. The majority had straight grab irons (no ladders) and straight-sided steps. Exceptions were the older Swift cars, which had drop grab irons, and some later Cudahy cars, which had ladders. Most wood-side reefers had outside metal roofs, but the older Swift cars (as in the model example shown above) had board roofs. Most were deep yellow in color (not lemon yellow), except Hormel and Wilson cars, which seem to have been light orange. Most had black side hardware such as door hinges, but most did not include grab irons, ladders, or both in the black paint. Most painted the kick plate under the door a contrasting color, black or boxcar red. Of course, the word “most” indicates that there are exceptions. I intend to show prototype photos of each model when completed.
Tony Thompson
Posted by Tony Thompson at 9:10 PM